Giant (1956)—was there ever a more appropriately named Hollywood production?  And, I’m not just referring to its three hour and twenty-one minute runtime, either. Director George Stevens rightly earned his second Academy Award for Best Director by capturing the vast landscape and racial complexity of Texas, while coaxing out tremendous performances from his cast. 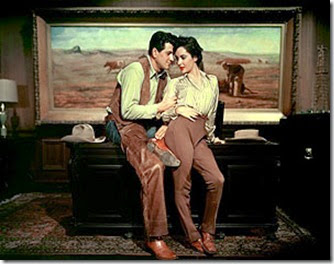 Edna Ferber wrote novels and plays that Hollywood liked to turn into movies: So Big (1924, 1932, and 1953), Show Boat (1932, 1936 and 1951), Cimarron (1931 and 1960), Saratoga Trunk (1945), Stage Door (1937), Dinner at Eight (1933), and The Royal Family of Broadway (1930)—to name a few, although there are others. Published in 1952, Giant was Ferber’s tenth novel. Her critique of Texas race relations in the book scandalized the Lone Star state and caused quite a stir in the literary world. As controversy was good for the box office, just about every studio in Hollywood wanted to buy the rights to it, but only George Stevens made her an offer she couldn’t refuse: he made her a producer and promised to make a faithful film adaption of her novel. As it turns out, he made as faithful an adaption as he and Warner Brothers were willing to make.  Specifically, sections of the novel that dealt with African Americans and Jim Crow were cut altogether or amalgamated into the film’s discussion of racism against Mexican Americas.  Still, Fred Guiol and Ivan Moffat’s Oscar-nominated adapted screenplay was groundbreaking not only in its treatment of racism but also in its portrayal of class and gender issues.  The story, spanning the lives of Jordan (Rock Hudson) and Leslie Benedict (Elizabeth Taylor) over a period of twenty-five years, is the solid foundation on which Stevens’ greatest cinematic effort is based.  And, while it most assuredly could have been trimmed down a bit, as there are, admittedly, a few 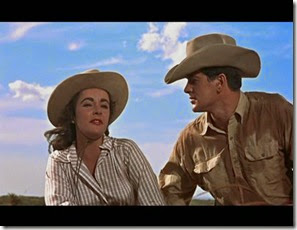 scenes that could have been cut without the film missing a beat, it is still a spectacularly told story.

When Texas rancher, Jordan “Bick” Benedict, travels to Maryland to buy a feisty horse named War Winds he not only takes home a horse but its ornery, free-thinking owner, Leslie, as his wife. Somehow her straightforward critique of Texas history—Texans stole the land from the Mexicans—is overlooked by Bick—I’m sure her stunning beauty was the culprit.  Anyway, Leslie’s comfortable and lush, green world of Maryland is replaced by an endless landscape of dirt and dust and overbearing heat. She also has to deal with Bick’s unmarried, hard-as-nails sister, Luz (Mercedes McCambridge), who is threatened by Leslie’s presence.  When Leslie asserts her authority as the woman of the house, Luz takes out her anger on War Winds, who, thankfully, throws her from the saddle, which results in her death—problem bitch solved.  With Luz out of the way, the only thing that stands in Leslie’s way is racism, classicism, and sexism—all of which her husband displays throughout their marriage. How dare she treat their Mexican servants with respect or think that Mexicans should have decent places to live and proper medical care?  Why on earth would you be friendly and polite to a no-account farmhand like Jett Rink (James Dean)? 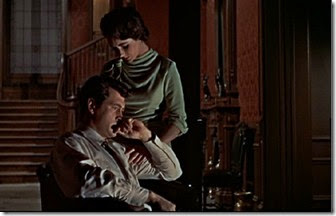 And, how dare you attempt to discuss either business or politics with men?  To say the first few years of marriage are rocky for them would be an understatement. Yet, Leslie’s progressive ways, not to mention her red-hot sex appeal, have a way of tempering her husband’s moods.  So what if they fight a lot? As Leslie likes to say, the best thing about quarreling is the making up afterward—which yields a set of fraternal twins, Jordy (Dennis Hopper) and Judy (Fran Bennett), and a high-spirited daughter, Luz (Carroll Baker).  Of course, after awhile they start getting on each other’s nerves—especially after Bick is particularly traumatized by the fact that his son doesn’t like horses. As a result, Leslie returns to Maryland with children in tow, while Bick has time to reconsider home on the range—alone.  And, so he finally yields to his wife and goes after her and a certain understanding is agreed upon.  You’d think that’s where the story ends, but wait, that’s only the first third of the picture.

After Bick and Leslie’s reconciliation the film jumps ahead about fifteen years, where we find the couple fully engaged in the lives of their nearly grown children.  Obviously, Leslie’s free-thinking ways ruled the nursery, because all of their children do exactly the opposite of what their pa 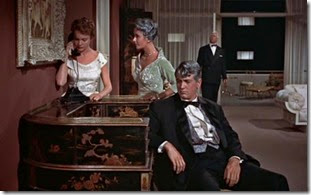 rents want them to.  Instead of taking over the ranch as his father demands, Jordy goes off to Harvard and then medical school, and eventually, God-forbid, marries a Mexican girl. Judy, for her part, disregards her mother’s desire that she go to a Swiss finishing school and attends Texas Tech, where she studies animal husbandry, and then elopes with a local ranch hand (Earl Holliman).  And, Luz…well, she becomes involved with the one absolute man that both her parents universally dislike: Jett Rink. By this time, Old Jett has struck it oil rich on the Benedict land that the first Luz left to him when War Winds snapped her neck. And while Jett and Uncle Sam might have convinced Bick to use his own ranch land for oil wells during World War II, Jett is still seen as a no-good son of a bitch by Bick and as a drunken manhandler by Leslie.  You see, Leslie knows that Jett wants Luz as a consolation for herself, but she can’t really say that to her daughter. With children like these, is it any wonder that both Leslie and Bick are fully gray after only twenty-five years of parenting? 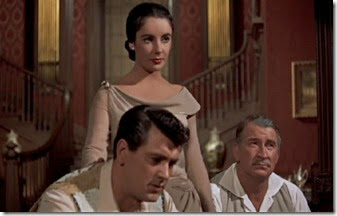 Okay, so let’s get this out of the way right now: contrary to popular opinion, James Dean is NOT the best thing about Giant. In my opinion, judgment of his performance is colored by the fact that he died a few weeks after his scenes wrapped and months before the movie was released.  Don’t get me wrong, he does an admirable job of playing an anti-social, ill-mannered non-conformist—the same role he pretty much played in all three of his films (East of Eden and Rebel Without a Cause being the other two)—but he is not what makes Giant tick. That responsibility rests solely on the delicate shoulders of Elizabeth Taylor, who finally was allowed to show that she was indeed a gifted, ADULT actress who deserved to be given substantial roles.  Stevens gave Hudson the choice of picking either Taylor or Grace Kelly as his leading lady in Giant.  For his part, Stevens didn’t think the 23-year-old Taylor had the emotional range required for Leslie and wanted Kelly for the role. Thankfully, Hudson chose Taylor—who, in my opinion, could act circles around Kelly.  It’s not easy playing a character who ages over twenty-five years during a movie, and especially when you are so highly regarded for your beauty, as Taylor was.  Yet, she expertly depicts the various periods of life her character encounters in the story. In the beginning, her Leslie is flirty and precocious but also a young woman who knows what she wants, namely Bick.  In the early stages of her marriage she comes off as caught between two worlds or selves—the woman Bick wants her to be and the woman she knows she is.  Leslie’s ability to stand up to her husband, and Texas for that matter, in a defiant but polite manner without appearing as a sort of Pollyanna or saint-like figure is a direct result of Taylor’s deft acting abilities.

My two absolute favorite scenes in Giant take place in the Benedict’s bedroom. This is fitting, of course, because this is probably the one place that she always got her way.  The first scene follows the aftermath of her defiant speech to Bick and his friends about them being cavemen and 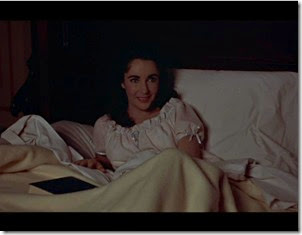 that women have enough sense to discuss politics and business.  When he comes up to the bedroom she pretends to be asleep but when he purposefully throws his boots on the floor to wake her up, she serenely pretends like she has forgotten her daring scene.  But he hasn’t, and so to appease him she apologizes for being rude to his friends, but that’s not enough for Bick and he says, “I'm asking you right now when you are gonna settle down and behave like everybody else.” Her answer of “never” sends him toward the adjoining room, where he plans to sleep.  But Leslie knows how to control Bick and she simply says, “You knew what a dreadful girl I was when you married me. I did not deceive you, sir. From the first moment I couldn’t have been more unpleasant,” and then she just sits there staring at him smoldering with unbridled sexuality.  The next morning, having completely decimated all of her husband’s strength by her wanton ways, she casually mentions, oh by the way, that she’s pregnant.

The second memorable bedroom scene isn’t based on sex, though. No, this one is all about a class that all successfully married people eventually graduate from: Spouse Psychology 101. Nope, by the time the Benedict’s are approaching middle age and sleeping in twin beds, Leslie can’t really rely on sex to impose her will on Bick anymore. Instead, when he believes he is manipulating her into agreeing to allow their daughter not to go to school in Switzerland but in Texas by saying, “I wonder if we love them enough to do what's really right for them,” Leslie knows what he’s doing and lets him have just enough rope to hang himself before dropping the hammer by informing him to brace himself because there’s another sacrifice to be made: Jordy wants to go to Harvard and then Columbia medical school. Priceless…and all done in the comfort of her twin bed. 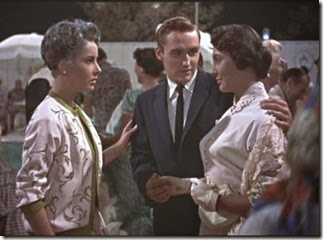 For its time, the film’s straightforward look at racism against Mexicans was rather bold—not as bold as it was in the novel, but still bold nonetheless. However, Leslie’s insistence that Mexicans be treated with dignity isn’t necessarily the same as saying that they deserve to be treated as equals, either. Still, by the end of the movie, when Bick gets his ass kicked by a racist diner owner who makes comments about his daughter-in-law and grandson, it is clear that Stevens is making a statement about racism in general, when he has the diner owner toss a sign on Bick which reads: “We reserve the right to refuse service to anyone”.  Was it an all-out attack on Jim Crow? No, but at least it was a start.

Overall, Giant is an entertaining film that dares to take on such things as racism, classism and sexism.  While it would have benefitted from a bit more editing, fine performances from Elizabeth Taylor, Rock Hudson, and James Dean elevate the overall effectiveness of the movie.  In particular, Taylor is mesmerizing as Leslie—how on earth she wasn’t nominated for a Best Actress Oscar is beyond me.