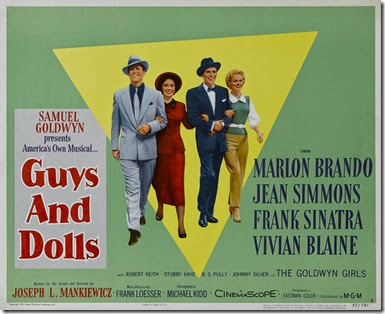 When I think of Gene Kelly or Frank Sinatra I envision them in musicals—they belong in this genre.  But Marlon Brando in a musical?  WTF!  The first time I sat down to watch Brando’s starring turn in director Joseph L. Mankiewicz’s Guys and Dolls (1955) I thought to myself: This isn’t going to end well, is it?  But, what a surprise, as the movie is actually rather entertaining and Brando does a relatively good job (thanks to a lot of sound engineering). Still, Brando’s not the best thing about Guys and Dolls. What makes the film really tick are the musical numbers performed by Frank Sinatra and Vivian Blaine.

Loesser’s musical, the film is essentially about a $1,000 bet between two professional gamblers, Sky Masterson (Brando) and Nathan Detroit (Sinatra), that Sky can’t take repressed Salvation Army Sergeant Sarah Brown (Jean Simmons) on a date.  Nathan desperately needs the money to secure a location for a floating crap game that he runs, and knowing that Sky will bet on just about anything and that Sister Sarah is a no-nonsense woman, especially when it comes to sin, i.e. gambling and drinking, Nathan believes he has a sure bet.  However, Sister Sarah’s mission is failing and General Cartwright (Kathryn Givney) is threatening to shut it down. Seeing an opportunity to win his bet and also take a rather attractive, if not uptight, woman to dinner in Havana, Sky guarantees that he can fill the mission with at least 12 bona fide sinners for the mission’s next meeting if she agrees to go with him.  When Sister Sarah agrees and Nathan loses the bet he must find another place to hold his crap game. Fortunately for him with Sister Sarah away in Havana, the mission is the perfect place to hold the game—Lieutenant Brannigan (Robert Keith) and the cops would never suspect such a venue.

While Sky and Sister Sarah make an interesting pairing, it is Nathan’s 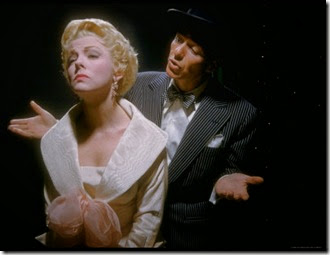 relationship with his nightclub singing fiancee, Adelaide (Vivian Blaine), that makes the film entertaining to watch.  Blaine, one of the four original Broadway cast members, is flawless as a woman with a 14-year old cold to match her 14-year old engagement to Nathan.  Yes, her baby-doll voice is a little annoying at first, but it grows on you as the picture progresses, and eventually you’ll accept it as a necessary character trait (or flaw).  She and her Hot Box chorus girls get to perform two outrageous numbers, “Pet Me Poppa” and “Take Back Your Mink”, that you can’t help but be amused by.  Her one solo number, “Adelaide’s Lament”, is about the psychology behind her cold and delivers the laughs.  Additionally, she sings “Sue Me” with Frank Sinatra near the end of the film, which spotlights that they were by far the two most talented singers in the movie. 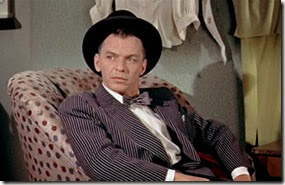 Sinatra, for his part, plays a member of the gambling underworld well—of course, he had the background for this role.  Perhaps he was miffed that Sam Goldwyn and Mankiewicz decided to cast a less than stellar singer who had never been in a musical before as the lead, but Sinatra really amped up his game for Guys and Dolls.  From his rousing rendition of “The Oldest Established (Permanent Floating Crap Game)” to his delivery of the best musical number of the movie, “Adelaide”, Sinatra showcases why people would eventually pay so much to watch his live shows—he has the chutzpah to deliver the goods.

Surprisingly, the most well-known song from Guys and Dolls, “Luck Be a Lady Tonight”, was not sung by Sinatra but by Brando.  Of course, Sinatra went on to later record his own version and it became one of his signature songs.  Brando may have had an inflated sense of self regarding his 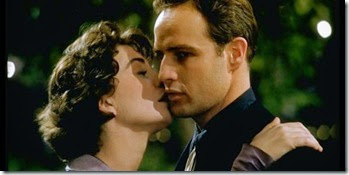 abilities as an actor, but he was the first to admit that he had a terrible singing voice.  In an interview ten years after his performance in Guys and Dolls he revealed that all of the songs we hear him sing in the film were the result of countless takes being cut into one version of a song.  This probably explains why Brando never did another musical, even with Guys and Dolls making an estimated $14.5 million profit.  Of course, he had company when it came to less than stellar voices, as Jean Simmons was known for her dramatic abilities and not her singing.  Still, they muddle along well together in the film and do admirable jobs on “I’ll Know” and “A Woman in Love”.  But, truthfully, their best interactions are when they are just acting. 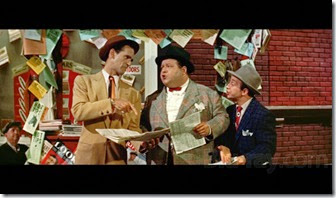 One musical number that is often overlooked in Guys and Dolls is “Fugue for Tinhorns”, which is sung by Stubby Kaye, Johnny Silver, and Danny Dayton.  This is a shame because it’s probably the most difficult to sing and best arranged song in the entire film.  Stubby Kaye was a fabulous singer, who was relegated to ancillary roles because of his weight, so it’s nice to see him shine in “Fugue for Tinhorns” as well as “Sit Down You’re Rockin’ the Boat”.

Overall, Guys and Dolls is an entertaining, not-all-together ridiculous 1950s Hollywood musical. It’s light and fun, and filled with catchy, memorable songs.  Most importantly, no one wanders off to dance a 10 to 15 minute ballet solo for the sake of art which makes absolutely no sense to the film’s overall narrative.  On the down side, it is a tad too long and would have benefitted from some editing.