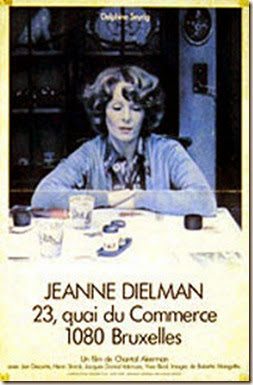 I know what you’re thinking: that sure is an elongated film title!  Well, the title matches the movie’s runtime, which clocks in at three hours and twenty minutes.  Oh, you think that sounds like an awfully long time to watch a story unfold?  Unless you’ve actually viewed this in one sitting, you have absolutely no idea just how long director Chantal Akerman’s Jeanne Dielman, 23, Quai du Commerce, 1080 Bruxelles (1975) really is. 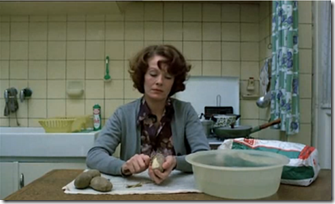 The plot, if you can dare to even call it that, of Jeanne Dielman revolves around three days of tedious household activities by Belgian widow Jeanne (Delphine Seyrig).  Akerman, who also wrote the screenplay, tells Jeanne’s story in real time.  That means that you are forced to watch Jeanne peel potatoes, make coffee, shine shoes, wash dishes, and countless other activities for countless minutes on end.  And these activities are almost always captured in one long static shot with no dialogue whatsoever. The only time that dialogue creeps into the movie is either when Jeanne goes out shopping or her son, Sylvain (Jan Decorte), comes home from school. And, even then, there are very few words passed between the characters.

For me, Jeanne Dielman is a study in boredom.  I get that this was some feminist attempt to depict the alienating effects of being a homemaker who only lives to please her son, but this was boredom overkill. I literally had to drink as much coffee as Jeanne made during the duration of the movie to stay awake.  I find it beyond exasperating that some people believe this is a masterpiece in minimalism.  How can a 200 minute movie be referred to as minimalistic?

Nothing exciting happens in Jeanne Dielman—and she was a 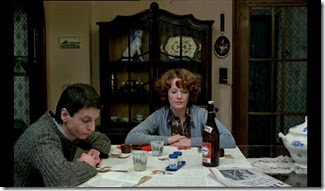 prostitute and, eventually, a murderer! Now, before anyone starts saying that I need to see it more than once to appreciate its “beauty” or “true meaning”, please be advised that I made the fateful decision to see this film before I started writing this blog. As such, I had to rewatch this today to ensure that it was as bad as I remembered before writing an unpleasant review. My ability to notice on my second viewing that Akerman does insert clues about Jeanne’s declining mental stability is the only reason that I didn’t award Jeanne Dielman my worst rating: :(((.

Overall, watching Jeanne Dielman is like watching paint dry.  The best thing about finally writing this review is that I will never have to watch this hideous film again.