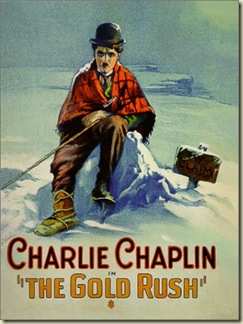 For all you silent-haters who don’t appreciate the genius of Charlie Chaplin, the star of this 1925 classic, all I have to say to you is this: Cluck you!

The Gold Rush in question does not take place in 1849 California (though the snowy mountain scenes were filmed in the Sierra Nevada), but nearly fifty years later in the Klondike of Alaska. Like countless others, the 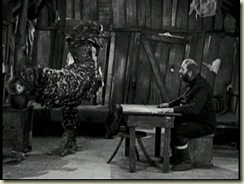 Tramp is in search of his fortune when a snowstorm forces him to take shelter in a mountainside cabin. This is where he meets Big Jim McKay (who has just found a “Mountain of Gold” but he keeps this on the DL) and baddie Black Larsen. When the three men run out of food they draw cards and Larsen has to go in search of food. Unfortunately for Big Jim and the Tramp, Larsen is a wanted man and when he runs into 2 police officers he kills them. He later stumbles upon Big Jim’s claim. Meanwhile, the duo enjoys the famous Thanksgiving Feast of boiled boot (really black licorice)—the Martha Stewart recipe closely followed. The savoring of every part of the boot the Tramp shows in this scene is hilarious. Later on Big Jim gets hungry again and starts to hallucinate that the Tramp is a chicken. Thus, ensues the classic chase between friend and fowl. Luckily for the Tramp, a bear wanders in and the Tramp shoots it—no more food shortage!

Later on the two men part ways and the Tramp goes to a mining town, where he falls in love with dance hall girl Georgia. He invites her to a New 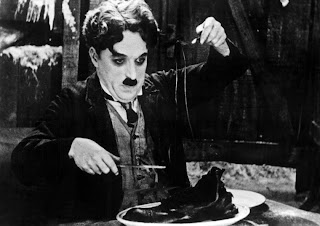 Year’s Eve dinner, which she forgets to attend. This is the dinner where he performs the famous dinner roll dance. While all of this is happening Big Jim is having a run in with Larsen that results in amnesia for Jim and death by avalanche for Larsen. Big Jim meets up with the Tramp and tells him he can’t remember where the claim is but if they can find the cabin again he’s sure they’ll find the gold mine and become millionaires. They find the cabin just in time to endure a blizzard and bunker down for the night. The next morning they go about fixing breakfast unaware that the cabin is hanging halfway over a mountain. In one of the most comic action scenes of Chaplin’s career, Big Jim and the Tramp scramble to escape the teetering cabin just in time. They find the gold mine and make for home via boat. If there is one fault with this film it is that Georgia is on the boat and she and the Tramp end up together—I prefer the lovelorn Tramp.

This film is classic Chaplin: incredible physical comedy paired with hilarious sequences. One of the best Little Tramp films of all time—it’s difficult to pick between this and Modern Times. A must see for a true film lover.