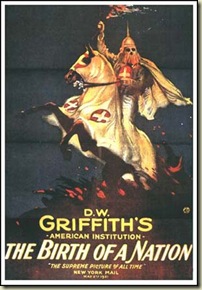 For those out of the loop, the nation being born is the Ku Klux Klan during Reconstruction. The film follows a southern family through the defeat of the Confederacy and the troubling times of Reconstruction. Seeing their world decimated by Northern Republicans, Copperheads, and their former chattel, they form a secret society of sheet wearers with a propensity to burn crosses and lynch those with darker pigmentation. It is a historical fact that some white southern men found themselves disenfranchised during this period, and that some uneducated former slaves were used as props in a political game led by former abolitionists and Republicans. Quite honestly, Reconstruction wasn't good for anyone other than the corrupt Grant administration and Rutherford B. Hayes, who got Southern Democrats in the House to give him the 1876 Election by promising to end Reconstruction. And remember what followed? Jim Crow...which was legally sanctioned by the Supreme Court from 1896 to 1954.

Upon the release of the film the NAACP led a protest and a few riots ensued--none in the South mind you. Griffith was so miffed by the controversy over the film that he released Intolerance the next year. Does the film have racist overtones? Yes. When some watch the film today they visibly cringe at a number of scenes, most notably the black man hell bent on raping the white woman, who would rather throw herself off a cliff than submit. 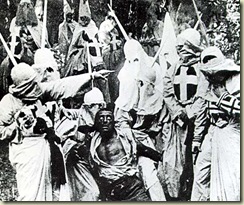 Yet, with all the controversy surrounding the film, it was still a revolutionary film. At 3 hrs. long, the film is no doubt a historical epic. Cecil B. DeMille owes a debt of gratitude to Griffith's penchant for detail and story development. Norma Desmond owes her love of the close-up to the nutty sister in this film. Orson Welles' fondness for the tracking shot finds itself an avid admirer of the battle scenes filmed by Griffith. Morricone and Williams, those prolific movie maestros, should also give a congratulatory bow to Joseph Carl Breil and Griffith for their score.

While this film definitely has racist overtones, I don't think that's enough to negate the important film elements first revolutionized in the production. This film should be watched.