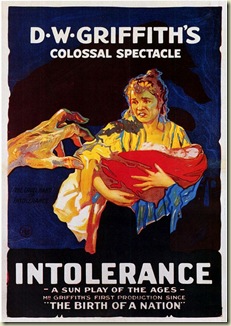 The title says it all. What can be tolerated by the human mind is not always as much as one would like to believe. Still miffed about his "ill-treatment" over the controversy surrounding Birth of a Nation, D.W. Griffith released this 3+ hour historical epic in 1916. The theme of the movie is "Love's struggle throughout the ages." This can be applied not only to the four stories juxtaposed in the film, but also to Griffith's overall love of filmmaking--he has endured hardship as well, with the backlash from Birth of a Nation.

The scope of the film is mind-altering today--let alone what one would have thought about it in 1916. Y 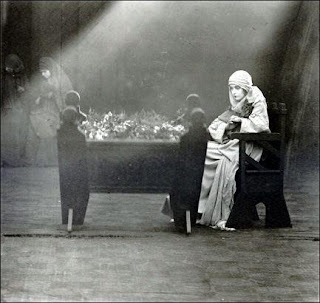 ou have four different plot scenarios--all in different time periods--crosscut in such a way as to add suspense to all of the stories. Griffith covers the life of Jesus, the St. Bart's Day Massacre, a Babylonian king who wishes to be a tolerant ruler, and a contemporary story about a man with a date with the electric chair and his tenacious lover's actions to get him a pardon. How do all these stories relate to one another? They don't, except in that they all show the evil that is wrought through intolerance. Do you think Griffith had a point to make? In the words of Sarah Palin, "You betcha."

The sets, costumes, scripts, and the 3,000 extras had never been heard of before in the land of movies. 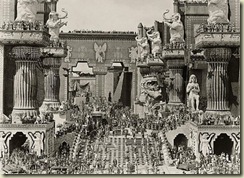 The film cost millions to make--it didn't see a profit.

I suppose all great historical epic directors, such as Cecil B. DeMille and David Lean, can trace their directing DNA back to Griffith and this film. Lovers of juxtaposition, such as Pedro Almodovar and Sergei Eisenstein, also owe a debt of gratitude to Griffith.

I personally like the film and fully understand its importance in the development of the world of film, but I also understand why some might not find it as enjoyable as I do.
Posted by Kimberly J.M. Wilson at 11:53 AM