Hitchcock would have hated CSI.

Although originally begun as a silent, this 1929 Hitchcock classic became the first British “all-talkie” after Hitch convinced producers that he could make great use of the new innovation. One problem though—the leading lady, Anny Ondra, was a Czech who spoke limited English. Oh, that tricky Hitch! To overcome this difficulty Hitchcock had Ondra mouth her lines while an off-camera Joan Barry spoke the lines. Sound familiar? Think Lina Lamont in Singing in the Rain.

The story revolves around Detective Frank Webber (John Longden) and his girlfriend Alice White (Ondra). After instigating an argument with Frank in order to meet up with an artist (Cyril Ritchard), Alice goes to the artist’s flat and shamelessly flirts with him. Showing immense gullibility, Alice agrees to try on a dress for him. While she’s doing this he’s hiding her dress. When she comes out he attempts to rape her. Alice grabs a knife and stabs him to death. As the girlfriend of a detective she knows she needs to cover her tracks, so she tries to erase any traces of her presence. Oops…she leaves a glove. Yet another good reason not to wear gloves anymore!

One of the more 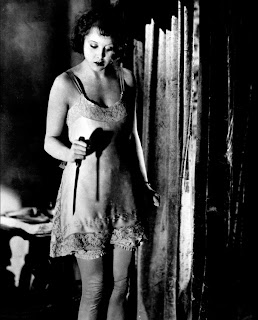 memorable scenes takes place at Alice’s breakfast table the next morning. In a textbook Hitchcock scene, Alice nearly has a breakdown as she stares at a knife on the breakfast table while her family obliviously jabbers on. Most of the words in this conversation are inaudible, but when the word “knife” is said it comes out crystal clear.

As coincidence would have it, Frank is assigned to the artist murder case. He finds Alice’s glove and decides to hide it. After confronting Alice with this information, the couple is shocked to learn that someone saw Alice at the flat. Tracey (Donald Calthrop), a petty thief, attempts to blackmail the couple. Too bad for Tracy he is identified by someone else as having been at the flat. He becomes the main suspect and is chased onto the roof of the British Museum, where he is killed. A guilty Alice goes to Scotland Yard to confess, but Frank prevents her. You know this film was made before the Hays Code, because they had some pesky rule that said people couldn’t get away with crimes—think The Letter. Not that I’m saying what Alice did was a crime, because that letch got what was coming to him. But, I suspect if this film had been made in 1935 Alice would have confessed and everything would have worked out in the end.

I like this film, but it isn’t my favorite Hitchcock film. It is suspenseful and has a number of trademark Hitchcock elements—specifically the breakfast and phone booth scenes. The story is gripping and the acting is pretty good, too. While he took a risk by making a talkie, the way Hitchcock uses dialogue, sometimes audible sometimes inaudible, was very clever.

An entertaining introduction (along with The Lodger) to Hitchcock.