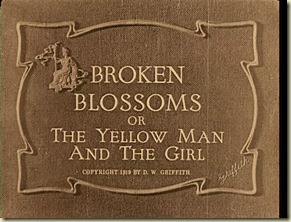 Does anyone have an anti-depressant? This 1919 D.W. Griffith silent, starring Lillian Gish, is, well, depressing.

The story revolves around a physically abusive father-daughter relationship and a Buddhist shop owner who becomes a protector to the daughter. The shop owner, called Yellow Man (oh, D.W., always the racially-sen 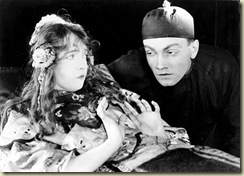 sitive director!) comes to the rescue of the girl a number of times and a quasi-romance develops. In 1919 this was a BIG no-no, as many states still had anti-miscegenation laws on the books. Mind you, Richard Barthelmess, who plays Yellow Man, was actually a white man, so I guess it was a lot less shocking than if Philip Ahn (just call him Ito) had played the role.

The film is rather violent, with a number of beatings, a shooting and a suicide. The Hays Code was over a decade away, so you could still get away with these more mature themes. What makes the violence so disturbing is the way Lillian Gish is photographed in Griffith's soft-style, gauzed lens. She looks ethereal in all of her shots, so when savage things happen to her it seems even more gruesome.

This is an unusual film. It is one of Griffith's more nuanced efforts, but it is not my favorite. I like it, but I don't love it. Is it a classic? In a sense yes. Technical elements such as the lighting, makeup, set design, and lensing elements make this movie important in the development of film. Is it Griffith's best film? I think not.