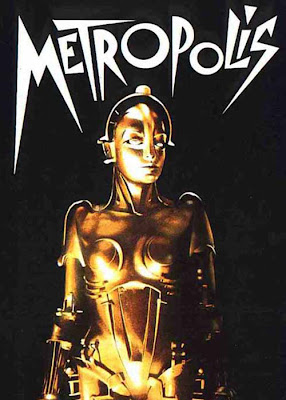 Fritz Lang directed this science-fiction epic about the struggle between workers and capitalists living in a futuristic world. While having a jolly good time in the Eternal Gardens, Freder, the care-free son of the Master of Metropolis (played by the great Abel Gance), meets Maria, a prophetess from the Workers’ City who opens his eyes to the harsh realities of the workers’ world. He witnesses the many hardships the workers endure with their hands so that he and the rest of his class can live pleasurable lives. 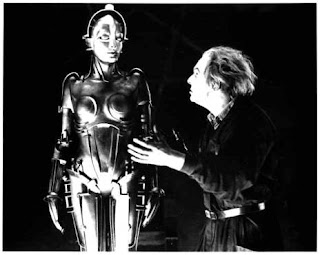 s. The Master of Metropolis goes to the resident mad scientist, Rotwang, for help in revealing the workers’ plans. Here he is introduced to Rotwang’s newest invention: a machine woman who is to take the place of Hel—the Master’s dead wife and Rotwang’s lost love. When the men overhear Maria prophesize that a mediator will appear (who just happens to be Freder) and make the lives of the workers better the Master orders Rotwang to mold the machine in Maria’s image so they can use it to mislead the workers. And so, Rotwang kidnaps Maria and with the help of some nifty (for the time) special effects he turns the machine woman into Maria’s evil twin (no, this is not a soap opera). He then programs the machine to destroy everything that belongs to the Master (his ultimate revenge for having lost Hel) which, of course, is Metropolis. First, she dances in the nude and seduces the capitalists of Metropolis into committing the seven deadly sins for her—mostly murdering one another. Next, he uses her to urge the workers to destroy the machines, which leads to Evil Maria detonating the heart machine, which causes the city to have a major power failure and massive flooding where the workers children are. Luckily, Maria escapes and she and Freder rescue the children. Meanwhile an angry mob captures Evil Maria and burns her at the stake, revealing her as nothing more than an android. In the end, Maria and Freder (who represents the heart of reconciliation) announce that there will be an alliance between the ruler (the brain) and the ruled (the hands). To say this message didn’t go over well in the U.S.S.R. would be a mild understatement.

This film was a huge box office failure and almost bankrupted Germany’s UFA Studio—the film cost 7 million reichsmark. Lang saw his film mercilessly cut several times and no original master survives. Nonetheless, this film is a visual spectacle with elements of German Expressionism and Art Deco in the overall set design. The special effects are impressive for 1927, most notably the use of mirrors to place actors in miniature sets (later used by Hitchcock in Blackmail). The original music by Gottfried Huppertz is also an added bonus.

The story itself is a bit preachy for my taste, but I have to admit I enjoyed the film. I especially enjoyed the scenes in Rotwang’s laboratory and who can forget how Hel looked and moved when she first came to life. This is an important piece of sci-fi film history and a visual dynamo.