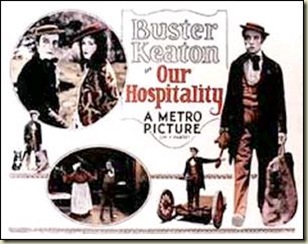 Who needs Tyson vs. Holyfield? McKay vs. Canfield: Inbreeding at its best!

This 1923 Buster Keaton silent finds Keaton’s character smack-dab in the middle of a long-standing southern family feud. NY raised Willie McKay finds himself on a comically antiquated train headed down south with the girl of his dreams. Little do the lovebirds know that their families have a long-standing southern blood feud. Introduced to and recognized by the 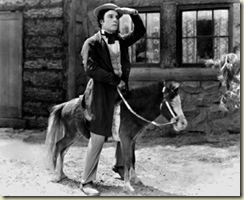 Canfield men as their sworn enemy, Willie soon becomes their object of prey. Unfortunately, southern hospitality dictates that they be polite to him while he’s in their home. And, this is where the hilarious cat-and-mouse game between Willie and the Canfields begins.

The comic timing of Keaton is genius. The stunts he performs with the train, bike, and log/waterfall sequences are inspired. One of the most famous scenes in silent movie history is Willie’s perilous rescue of his girlfriend just before she goes over a waterfall. It always amazes me how fearless Keaton must have been to perform such dangerous stunts. Today’s “action” stars can’t even blow their noses without a stunt double.

Funny and entertaining, this is an enjoyable movie.