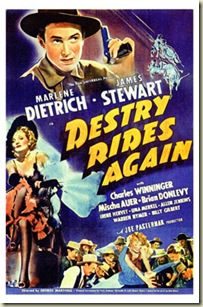 It’s 1939 and things aren’t going well for Marlene Dietrich in Hollywood. Her longtime collaboration with Josef von Sternberg is over and she hasn’t made a good film since The Garden of Allah in 1936. And, then, as luck would have it, she’s cast against type as an unglamorous saloon singer in a satirical western. Who knew that all this sophisticated international star needed was a good old-fashioned non-typical American western to revamp her career?

Based on the Max Brand pulp story of the same name, this film was a remake of the 1932 Tom Mix film (and subsequently was later remade in 1954 with Audie Murphy). George Marshall directs a pair of western virgins in Dietrich and James Stewart (playing the title role) and does his very best to parody the classic Western. For example, Stewart plays a pacifistic unarmed lawman in a town where flying bullets are the norm. Released in the same year as Stagecoach, the film that set the classic western standard, Destry Rides Again sets its own unique template that other films like Cat Ballou and Blazing Saddles would later borrow from. 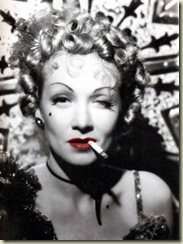 The story take place in a town appropriately named BOTTLENECK—primarily because just about the whole movie takes place inside the Last Chance Saloon (where, yet another bit of irony here, Dietrich’s character works). Owned by a shady gambler named Kent (Brian Donlevy), the saloon is a hotbed for gunfights and cheating gamblers--most notably Kent himself. Right from the start, we see Frenchy (Dietrich) helping Kent cheat the hapless Lem Claggett (Tom Fadden) out of his $10,000 ranch by spilling hot coffee on him and allowing his cards to be switched. When Claggett complains to Sheriff Keogh (Joe King) that he was cheated, the sheriff confronts Kent and is shot and killed (off-screen).

Later, we see Frenchy doing her best Mae West impression as she sings “You’ve Got That Look That Leaves Me Weak” to a sexually charged audience. Soon after the song ends, Kent has the corrupt Mayor/Judge Slade (Samuel S. Hinds) announce the town drunk, Dimsdale (Charles Winninger), as the new sheriff. Where is the esteemed new sheriff upon this announcement? Passed out on the floor, only to be roused by a whisky to the face. Oddly enough, he decides now is a good time to become sober. It seems that before he was a souse he’d been the deputy of Marshal Destry, a famous and respected lawman. He announces he’s going to hire Destry’s son, Tom (Stewart), to help bring order to Bottleneck.

Dimsdale’s (and also the town’s) expectations that Tom Destry will strike fear into criminals are quickly obliterated when a mild-mannered Tom emerges from the stage holding a parasol for fellow passenger, Janice (Irene Harvey). 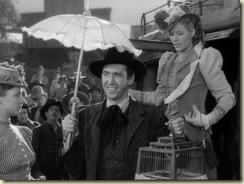 Immediately he becomes the source of ridicule, especially after he reveals that he doesn’t carry a gun and that he drinks milk instead of whisky. Frenchy goes so far as to give him a broom and bucket as tools that he can use to clean up Bottleneck. James Stewart is priceless in these scenes, with his famous aw-shucks attitude. With this characterization, George Marshall has now established the a-typical western sheriff/hero.

However, nothing is more priceless than the catfight between Frenchy and boarding house owner Lily Belle Callahan (Una Merkel). Angry that her Russian émigré husband Boris (Mischa Auer) has lost his pants to Frenchy in a card game, Lily accuses Frenchy of cheating 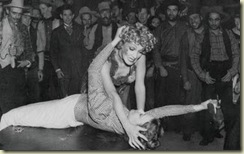 and all hell breaks lose. In yet another a-typical move, Marshall doesn’t have the obligatory barroom brawl occur between men but between two scrappy females. Perhaps one of the longest catfights ever, both women (without the aid of stand-ins) engage in punching and wrestling (among other things) one another to the ground (where they roll around for an extended amount of time) until Destry pours a bucket of water on them. Oh, no he didn’t! This enrages Frenchy and she turns her wrath on him. After engaging in the same tactics she used on Lily, she grabs a gun and aims it at him. Deciding not to shoot him, she throws everything she can get her hands on at him and even finds herself on his shoulders at one time. This scene is absolutely side-splitting hilarious—her wrath and his bewildered amazement are priceless.
After Tom escapes the saloon, Dimsdale threatens to fire him for being the town laughing-stock. Tom tries to convince him that they can restore order without using guns. Explaining that a gun didn’t do his father any good when he was shot in the back in Tombstone, Tom convinces Dimsdale to give him a chance. We soon learn that just because he doesn’t want to carry a gun it doesn’t mean he can’t handle one. When he stops a group of cowboys from shooting their guns in the air, Tom borrows a gun and puts on a clinic to the amazement of onlookers. Soon Tom learns 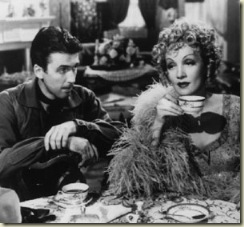 about the trouble between Kent and Claggett and decides that Frenchy is the person to get answers from. Over coffee in her room, Tom makes mild insinuations that Frenchy purposefully dropped coffee in Claggett’s lap to distract him from his cards. Offended, Frenchy throws him out, but not before he makes a sly comment about her not wearing so much makeup because it covers up her real beauty. As time wears on, Frenchy begins to admire Destry and even offers him her lucky rabbit’s foot and advises him to stay out of dark places.

With his newly sworn-in deputy’s, Boris, help, Destry tricks Kent into believing that he knows where Sheriff Keogh’s body is. When Kent sends one of his thugs to check on the body, Boris and Dimsdale tail him and arrest him when he leads them to the body. To avoid the corrupt Mayor Slade presiding over the case, Destry sends for a federal judge. This causes Kent to plan a jailbreak for his man. Fearing that Destry will be killed in the jailbreak, Frenchy sends for him and tries to distract him by telling him she’s leaving town and wants him to go to New Orleans with her. When shots ring out, Destry rushes back to the jail to see the prisoner has escaped and that Dimsdale has been fatally shot. Having had enough, Destry arms himself with his father’s guns and with the help of the fed-up decent townspeople, storms the saloon. Frenchy even tells all the ladies (with pitchforks and rolling pins, nonetheless) they should help their men. 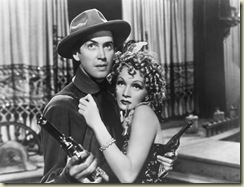 While the townsfolk are taking care of Kent’s men in the bar, Destry climbs up to the second floor in search of Kent. Just as Kent is about to shoot Destry, Frenchy throws herself in front of him and is mortally wounded. After shooting Kent, Destry holds Frenchy in his arms and honors her last request for a kiss. The way Frenchy rubs away her lipstick at this moment is heartbreaking. In the end, order is restored to the town, but not before Destry has lost another two people he loved to guns.

Before he became the serious cowboy/hero in such westerns as Winchester ‘73 and Broken Arrow, Stewart got to play the a-typical western hero. His easy-mannered performance is not a surprise, as it was his calling card on just about every film he ever made, but it is interesting to watch his Destry spin yarns into valuable lessons. His Destry reminds me of a Wild West Aesop.

Dietrich, of course, had her career revived by this film. She would go on to make two other westerns, The Spoilers and Rancho Notorious, but neither topped her performance here. She shows so many sides to her character it’s difficult to keep up: sassy, sexy, fierce, humorous, fearful, and loving. The bawdiness she puts into her musical numbers, most notably “See What the Boys in the Back Room Will Have”, is wickedly enjoyable. She took a big risk playing against type here, but in the end it worked in her favor, as she started to play more diverse characters.

Hilariously entertaining on several levels, this is a true classic.
Posted by Kimberly J.M. Wilson at 4:49 PM