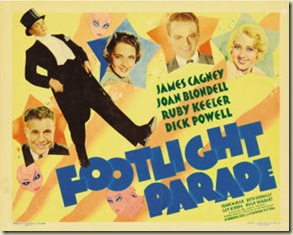 Busby Berkeley was a field artillery lieutenant in WWI. Thus, he watched as soldiers marched in unison as they obeyed a strict cadence. No doubt this experience laid the groundwork for what would would become some of the most innovatively choreographed musical numbers in film history. Last week I wrote about Berkeley's breakout work in 42nd Street, so it is only fitting that I do a follow-up this week about his greatest musical number ever, “By a Waterfall” from Footlight Parade.

Following up his directorial success of 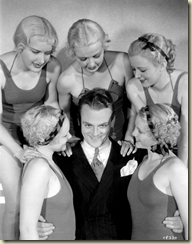 42nd Street, Lloyd Bacon helmed yet another backstage musical with this film. James Cagney plays Chester Kent, a down on his luck Broadway director who becomes a prologue director after talking pictures prove hugely profitable. And just what is a prologue director, you ask? Someone who puts together live stage shows to be shown in movie theaters before the main film. This is a step down for Chester. The musical comedies that he directed for Broadway were very successful, but once the “talkie” emerged his ticket sales dwindled. If this wasn’t bad enough, his wife (Renee Whitney) leaves him after she learns that his Broadway career is over. She should have stayed, because Chester and his partners, Sy Gould (Guy Kibee) and Frazer (Arthur Hohl), make their prologue enterprise a huge success. Due to this success, Chester’s main competitor decides to plant a mole in the company in order to steal Chester’s lavish production ideas. In addition to this problem, he has to worry about his underhanded partners who are shortchanging him from his hard-earned profits. What is a frazzled, creative genius to do? 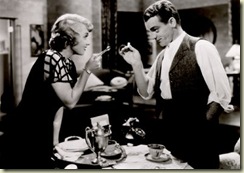 Like most distracted, overworked men Chester has a woman on the spot who keeps his chaotic world in order: Nan Prescott (Joan Blondell). Dependable, loyal, and desperately in love with her boss, Nan keeps the ship afloat as Chester puts his attention everywhere but on her. One place that he sets his attention is on gold-digging actress Vivian Rich (Claire Dodd), who Nan sees right through. To say that Vivian is a piece of work would be an understatement.

When a big deal emerges with the Appolinaris’ theater company for a 40-theater contract, Chester must come up with three new shows in three days. Not willing to take a chance on his brilliant ideas leaking out to his competitor, Chester locks everyone in the studio and forbids any phone calls or outside visitors. 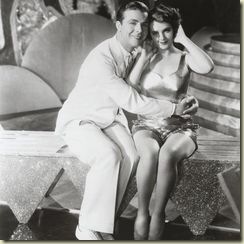 One of the brilliant ideas Chester has is that mousy, bespectacled secretary Bea (Ruby Keeler) take off her glasses and become the star of the show. He also thinks that Scotty Blair (Dick Powell) has a nice singing voice; even if he had been forced upon him by Mrs. Gould (the outrageously funny Ruth Donnelly). Coincidentally, just like in 42nd Street, Powell and Keeler are romantically paired in this film. If working under such tight time constraints and fearing that someone will leak his ideas to his competitor aren’t enough, Chester must also try to meet Mrs. Gould’s “decency” requirements, which are monitored by her brother Charlie (Hugh Herbert).

In the end, what emerges from Chester’s creative mind are three very memorable musical numbers. The first, “Honeymoon Hotel” is performed by Powell and Keeler, who play a newly married couple who just want to enjoy their honeymoon without interruption but keep being interrupted by relatives and a creepy baby played by Billy Barty. The lyrics are very suggestive and overall the number was deemed too racy by many and was heavily cut in some local theaters.

The second act is the most spectacular (and the one that is most associated with Berkeley): “By a Waterfall.” Over 15 minutes long, this was the first on-screen aquacade. 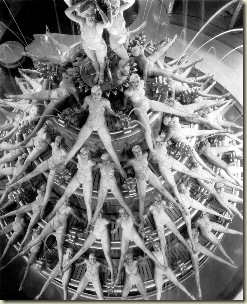 It featured 100 “bathing beauties”, costumed in swimming suits that made them appear naked, performing various aquatic acts in an 80-by-40-foot swimming pool. The pool was designed with a glass floor and glass walls, which allowed Berkeley to shoot the swimmers from every imaginable angle. The swimmers dance and form intricate, geometric patterns (which were captured by overhead kaleidoscopic shots). At the end, the swimmers form a revolving 70 ft. high wedding cake/fountain. It is the most spectacular musical number ever captured on film. Berkeley had the pool lined with glass walls and a glass floor so he could shoot the swimmers from every possible angle. No musical number has ever topped this.

The final number is one of my favorite James Cagney performances: “Shanghai Lil”—which was a nod to the 1932 film 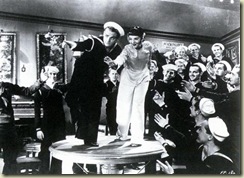 Shanghai Express (which I reviewed back in February). Told in an operatic fashion, the audience watches as a camera takes them through the waterfront bars of Shanghai. Cagney plays a tap dancing sailor looking for his lost lover Lil, a Chinese prostitute, in an opium-laced brothel. Watched today, most people don’t get the political messages that were being conveyed about American imperialism in Asia and FDR’s New Deal—especially with the image of the NRA’s Blue Eagle, which was a boost to fair wages and business competition (this Act was ruled unconstitutional by the Supreme Court in 1935). If you can get over seeing Keeler in a black wig and Chinese makeup, you’ll enjoy watching her dance number with Cagney—it is phenomenal. All told, more than 150 people performed in this number. Then unknowns John Garfield, Ann Sothern, and Dorothy Lamour appear in this sequence.

Overall, a highly entertaining musical. Cagney is at his best as the overworked Chester and Joan Blondell is her usual charming self. The supporting cast is stellar, especially Ruby Keeler and Ruth Donnelly. All of the musical numbers are great and two of them are considered among the greatest ever made.