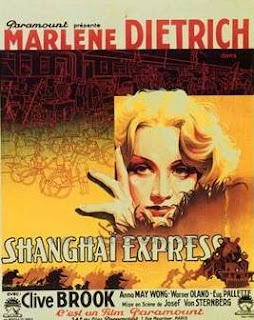 Jealousy, betrayal, obsession, passion…and this was only the fourth of the seven films Josef von Sternberg made with Marlene Dietrich. The title of their last film together: The Devil Is a Woman—coincidence? Ah, but this is not a review of the strange co-dependent relationship between director and actress. Instead, let's focus on the slightly less complicated romance between a fallen woman and a stiff-upper-lip Englishman.

As civil war is raging in China, a British surgeon, Captain Donald Harvey (Clive Brook) boards a train traveling from Peking to Shanghai, in order to reach the governor general, for whom he must perform brain surgery. Though the voyage could be perilous, his friends somehow envy him, as it is revealed that the notorious courtesan Shanghai Lily (Dietrich) is on board. Being a proper English gentleman, he’s never heard of her. 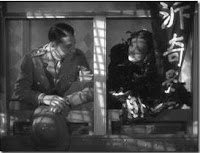 As chance would have it, onboard he meets a former lover, Magdalen, whom he hasn’t seen in five years. Things didn’t end well. She played games and tried to measure his love, and he was a jealous man who could only take so much before he left her. In the process of catching up, Magdalen informs Doc (as she affectionately calls him) that she has a new life and name. When asked if she’s married, a black-veiled Dietrich utters the classic line: "It took more than one man to change my name to Shanghai Lily." Um, awkward moment. Yet, it is obvious that they both still have feelings for one another—both good and bad.

Later, Doc learns from Reverend Carmichael (Lawrence Grant), who is troubled beyond measure about prostitutes traveling on the train, that Shanghai Lily had made one of his patients go insane and that there were countless others who’d had their lives ruined by her. I suppose at this moment Doc felt pretty foolish for carrying around a watch with her picture in it. 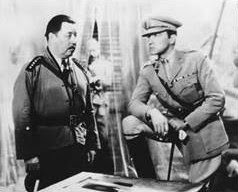 Meanwhile, there’s still a civil war going on in China. As such, government soldiers search the train and arrest the aide of Henry Chang (Warner Oland—yes, Charlie Chan!), a Eurasian merchant who is also a secret rebel leader. Angered by these actions, Chang sends a coded telegram to his rebels to attack the train at midnight. After securing the train, Chang takes Doc hostage so he can use him in exchange for his aide. He also offers to take Lily to his palace, but she declines, saying she’s out of the business. An eavesdropping Doc hears them, barges in and knocks Chang to the ground. This angers the rebel, but because he needs Doc alive, he does nothing and decides to take out his anger by raping Hui Fei (Anna May Wong), a friend and fellow prostitute of Lily’s. 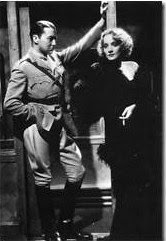 Once his aide is released, Chang decides to exact revenge on Doc for his insolence by blinding the doctor. In order to save Doc’s eyesight, Lily offers to become Chang’s courtesan—just when she thought she was out, they pull her back in. Oblivious as ever, Doc’s old jealousies are ignited when he learns Lily is to stay with Chang. Fortunately, before this can happen, a revenge-seeking Hui Fei stabs Chang to death. However, this does not lessen the anger and resentment that Doc has toward Lily, whom he believes is still a no-good whore. Oddly enough, it is Reverend Carmichael who gets Lily to admit what she did out of love for Doc. Yet, she asks Carmichael not to reveal her secret, as she feels that without faith there is no love. Upon their arrival in Shanghai, Lily offers Doc a replacement watch and he gives into his love. In one of the more classic closing images in film, von Sternberg tightly moves in on the couple as they embrace and kiss on the station platform.

Nominated for three Academy Awards (Best Picture, Best Director, and Best Cinematography [winner]), this was the Titanic of its time, with a box office record $3.7 million. Suffice to say, this was the biggest hit of Dietrich’s career as one of Hollywood’s leading ladies. 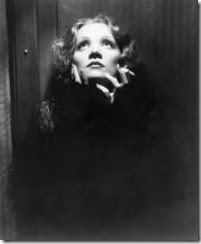 Dietrich and Brook have amazing chemistry. He fits the reserved Englishman type and she just sizzles as a worldly seductress. The furs, veils, ostrich feathers, and an array of dazzling costumes enable Dietrich to fully absorb the role of the vamp. In addition, with the aid of von Sternberg, Dietrich is able to reveal the softer, more vulnerable side to Lily as well. This is perhaps one of her top performances.

Fans of the Charlie Chan films will be shocked to see Warner Oland playing such a sinister character. It is not always easy to play against type, but Oland does a nice job conveying the menacing nature of Chang. In addition, Anna May Wong is also a delight to watch.
A classic love story about overcoming jealousy and having faith in, well, love.