Before 1935 Errol Flynn was an Australian nobody in Hollywood. He’d made five very forgettable films (only one of which he “starred” in) and his career was in neutral. And, then Robert Donat turned down (rather vehemently) the role of Captain Blood. Although he may have been a stingy S.O.B., Jack Warner often could spot diamonds in the rough and he saw something in Flynn’s raw animal magnetism and gave Flynn the role that would launch an adventurous career.

Based on Rafael Sabatini’s novel of the same name, Captain Blood was directed by Michael Curtiz and was nominated for 5 Academy Awards. Errol Flynn plays a 17th Century Irish doctor who is found guilty of treason in England after treating a man wounded in the 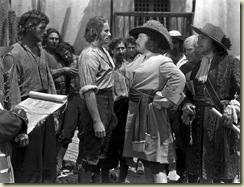 Monmouth Rebellion (this was a rebellion to overthrow King James II). Sentenced to slavery in the West Indies (specifically Port Royal, Jamaica), he is condemned to the sulfur mines after refusing to allow the colony’s military commander, Colonel Bishop (the strangely entertaining Lionel Atwill), to examine his teeth. Attracted by Blood’s open defiance of her uncle, the plucky Arabella Bishop (Olivia de Havilland) decides to rescue Blood from sure death and buys him for 10 pounds. Oh, what would a gorgeous woman want with a rebellious slave stud? Get your minds out of the gutter! Blood is openly resentful towards Arabella for interfering and the two often trade barbs with one another, 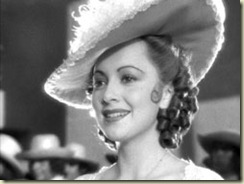 but she’s still the boss (kind of). Both Arabella and Blood are fiery, strong-willed individuals, so it is great fun to watch their scenes together. In particular, de Havilland seems to have a mischievous gleam in her eye throughout the film. This was the first of eight film pairings for Flynn and de Havilland—one of the most successful in screen history.

In the begging of his servitude with the Bishops, Blood finds himself working on their plantation. When Arabella sees that Blood is getting the lash a bit too much for his unchecked attitude, she decides to set him up in a more cozy position. It just so happens that the governor 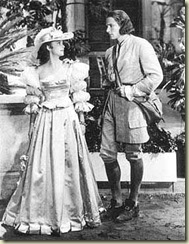 of Port Royal has gout, and who better to treat him than Dr. Blood? Later, she rescues him again when she provides an alibi for him when he is making plans for an escape. This sets up one of the more comical scenes of the film: Blood apologizes and tries to explain why he’s been so rude to Arabella. Her response is pure delight, “I've had men tell me they had reasons for admiring me. And some few, it came, had reasons for loving me. But for a man to store up reasons for resenting me. How refreshing!" For some reason Blood thought this was an invitation to a kiss—oh, no you didn’t! Slap!

As Blood and his friends continue their escape plans, the island is attacked by Spanish pirates. This causes the necessary diversion for them to make their escape. Yet, when they get to their hidden boat they find it damaged and unseaworthy. Not letting this deter them, they decide to take over the weakly guarded Spanish boat. After subduing the Spanish crew, and thus, saving Port Royal, the escaped prisoners are told by Colonel Bishop (who somehow made his way to the ship) that the king might reduce their sentences for their bravery. They toss him overboard and become the Pirates of the Caribbean (take that Johnny Depp!), with Dr. Love becoming Captain Blood.

Later, in a stop in Tortuga, Blood meets 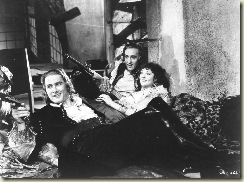 French pirate Captain Levasseur (Basil Rathbone). This was the first of many screen partnership between Rathbone and Flynn. Drunk as a skunk, Blood forms a partnership with this most untrustworthy Frenchman. The partnership is rather fortuitous, because Levasseur soon captures an English ship carrying Arabella and an emissary of the king, Lord Willoughby (Henry Stephenson). Levasseur wants to sell them back for a ransom, but Blood decides to 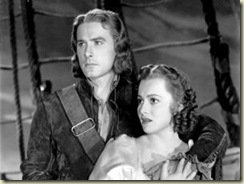 buy them for a handful of pearls. Both Arabella and Levasseur aren’t happy with this deal. She, because it’s a blow to her pride—Blood is the boss now. Levasseur, because he has plans for the haughty prisoner. Blood is forced to draw his sword on Levasseur, thus ending their already fragile partnership. In the first of many crossed saber scenes between Rathbone and Flynn ensues, and Levasseur is killed. This is a great swordsmanship scene that 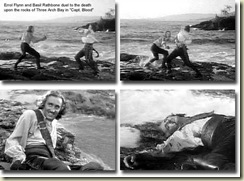 was timed to the incoming waves. Filmed at Laguna Beach, in this scene Rathbone had to fall at exactly the same moment that a wave was coming in and could cover him and then wash back out to sea to reveal his dead body. They did it in one take.

Good news, King James II is dead and William and Mary are now the rulers of England—praise be upon the Glorious Revolution of 1688! Lord Willoughby informs Blood that he will grant the entire crew a pardon if he returns them to Port Royal. 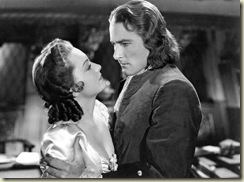 When Arabella tells him she wants nothing to do with his pirate way of life, he decides to return his new purchases to Port Royal. This could be a problem, because due to his rather profitable ventures on the high seas, the governor of Port Royal has been replaced by Colonel Bishop, who has sworn vengeance on Blood. When the ship returns to Port Royal they find it under French attack. It would seem that instead of protecting the colony, the English fleet is out at sea trying to hunt down pirates. In 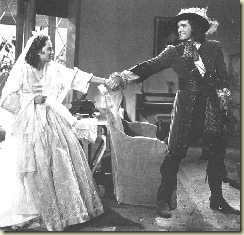 a bit of irony, Blood and his crew overtake the French ship and save Port Royal yet again! As a reward, Lord Willoughby appoints Blood the new governor of the colony and Arabella gives in to her love for her heroic hunk.

The chemistry between Flynn and de Havilland is undeniable. I always appreciate how well de Havilland seems to play feisty but refined women. In addition, the role reversal between the two lovers is enjoyable to watch. Plus, she could always carry off just about any costume they put her in in her many period films.

Besides being a great adventurous love story, this film made good use of special effects, camerawork, and a fantastic Oscar nominated musical score. Director Curtiz carries the film at a past pace and makes good use of cinematographers Ernest Haller and Hal Mohr. Eric Wolfgang Korngold’s score is very memorable as well. Although it lost the Best Picture Oscar to Mutiny on the Bounty, Captain Blood stands alone as one of the greatest pirate films (pre CGI) ever.