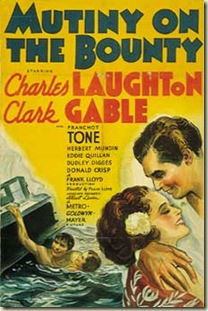 In 1935 Columbia Pictures president Harry Cohn had the great distinction of awarding the first “Oscar” for Best Picture (it was actually called Outstanding Production at that time) to MGM’s nautical classic Mutiny on the Bounty. His studio had no film nominated (which is difficult to believe since 12 films were up for the award), so he was just happy to be asked to the party. Anyway, between 1927-1934 the award wasn’t known as the “Oscar”, so technically this was the first Best Picture to win the “Oscar”—one of those tricky questions for you trivia buffs out there. It also holds the honor of being the first remake (1933’s In the Wake of the Bounty) to win Best Picture. In the end, the film was nominated for 8 Academy Awards and only won one, but at least it won the biggest prize of all. Of course, they may have picked up the Best Actor award if it hadn’t been for the fact that the three male leads (Clark Gable, Charles Laughton, and Franchot Tone) were nominated against one another. I suppose Victor McLaglen was quite happy about this, because he took home the award for his performance in The Informer.

The screenplay was a monumental undertaking, as screenwriters Talbot Jennings, Carey Wilson and Jules Furthman were given the task of adapting the first two volumes of Charles Nordhoff and James Norman Hall’s 1932 The Bounty Trilogy to the big screen. For the amount of story they had to work with, I think it is a miracle the movie was only 132 minutes long. Perhaps this is one of the reasons they were nominated for an Oscar (they lost out to The Informer, too!). There was an actual Mutiny on the Bounty, but, like most Hollywood films based on true stories, this was not a completely accurate retelling. For example, Captain Bligh wasn’t reprimanded in this incident but, in fact, promoted to Vice Admiral for his actions.

Director Frank Lloyd also picked up a nomination (he lost to John Ford, who, you guessed it!, directed The Informer—was there a conspiracy?) for heading MGM’s $2 million over-budget film. Good thing for Lloyd that it was also the top-earner of 1935, at $4.5 million. Of course, producers Irving Thalberg and Albert Lewin couldn’t complain since they signed off on a film primarily shot on location in Tahiti and Catalina Island. Perhaps Lloyd’s greatest accomplishment on this film was getting Clark Gable to shave off his cherished mustache. 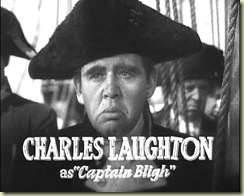 The story begins in 1787, aboard the H.M.S. Bounty, which is bound for the breadfruit capital of the world, Tahiti. Once there, the crew’s mission is to transport the cheap foodstuff to plantations in the West Indies. Charles Laughton gives one of his most memorable performances as the sadistic and abusive captain of the Bounty, Captain Bligh. Some genius at MGM thought Wallace Beery was the best actor for this role. Really? Wallace Beery better than Academy Award winner Charles Laughton? I hope someone got a promotion for averting this disaster. Anyway, before the ship can set off from Portsmouth, Captain Bligh has one bit of business to attend. A crew member must be flogged for violating a rule. The problem: he’s dead. No matter, he still must be flogged to send a message to the rest of the crew. Does the audience really 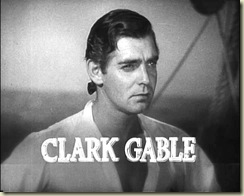 need to know any more about Bligh? First Officer Fletcher Christian (Clark Gable), who is used to working with this nutcase, tries his best to heed his captain’s orders while at the same time gaining the respect of the crew. This only infuriates Bligh more, which, in turn, causes him to do things that makes Christian grow to resent him. In addition to Fletcher, Midshipman Roger Byam (Franchot Tone), who is on his first cruise with Bligh, is astounded and shocked by the captain’s behavior.

By the time the ship lands in Tahiti, Fletcher is out of favor with Bligh and is not allowed to go ashore. Instead, Byam goes ashore and falls in love with the beautiful Tehani (Mrs. Marlon Brando, Movita Castaneda). Not wanting to hog all the beautiful island women, Byam concocts a plan to allow Fletcher to go ashore. Once there, he also falls in love with Maimiti (Mamo Clark), the granddaughter of the island chief. The crew spends six months in paradise and then, once they have got all the breadfruit they can carry, they must set off for the West Indies. Having led a carefree, happy existence on the island, the men soon become reacquainted with Captain Bligh’s strict 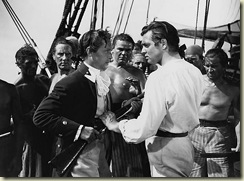 running of the ship. Some of the men can’t take it and decide to abandon ship and return to the beautiful Tahitian women. When they are captured, Bligh orders their flogging and demands that the ship’s very ill doctor, Dr. Bacchus (Dudley Digges), attend. What a clever last name for an alcoholic!!! Any way, Dr. Bacchus dies after leaving his bed to obey Bligh’s order. This causes Fletcher to break and he intervenes in the flogging and starts a mutiny. Bligh is tied to the mast and becomes the victim of countless insults from his crew. Luckily for him, Fletcher is an honorable man. 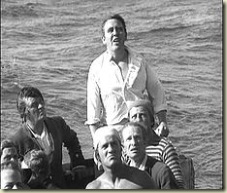 When the crew decides to kill him, Fletcher saves him and sets him and some of the non-mutineers out to sea in a small rowboat. Unfortunately for Byam, who doesn’t support the mutiny, there is not enough room for him in the boat. Put out to sea, Bligh swears vengeance and promises he will live to see every last mutineer hang. A master sailor (but a total SOB), Bligh does manage to travel the high seas over 3,500 miles to reach the East Indies. 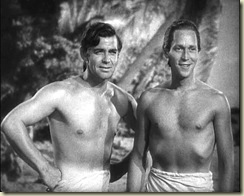 Meanwhile, the mutineers return to Tahiti, where both Fletcher and Byam marry their Tahitian beauties. And for a whole year, the crew lives in paradise. But then one unfortunate day the Pandora, commanded by one Captain Bligh, drops anchor in the Tahitian harbor. Fletcher leads the mutineers on an escape from the island with the Bounty, while Byam and five other men return to Bligh. As psycho as ever, Bligh charges them with mutiny and places them in irons. Crazy for vengeance, Bligh recklessly pursues the Bounty and wrecks his ship. Miraculously, those who survive this crash also survive another rowboat expedition and eventually make it back to England, where Byam faces court-martial and is sentenced to hang. At his hearing, Byam reveals the true nature of Captain Bligh and the cruelty of flogging as a punishment. In true Hollywood style, Byam is pardoned and allowed to return to service in the navy, while Captain Bligh’s behavior is denounced.

And what happened to Fletcher? He and his crew took the Bounty to Pitcairn Island and promptly crashed and burned it so no one could ever leave. No doubt after seeing this movie thousands of women went home and dreamt they were stranded on a deserted island with Clark Gable.

Overall, and enjoyable adventure story. The cinematography is pretty impressive, but I definitely think it would have been better shot in color. The acting is top-notch and Charles Laughton does a great job portraying one of the most vilest characters in screen history.