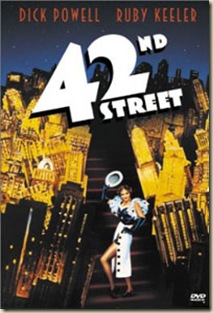 In 1933, the Great Depression was steamrolling its way across the globe. Each country dealt with public morale in its own way. To put a little pep in the step of their people the Japanese pushed further into Manchuria and the Germans made Adolf Hitler their leader. In America, we decided to make musicals. Our rationale—poverty is easier to swallow if you’re being entertained by a good song and dance show. And in the end, aren’t dancing shoes more attractive than marching boots?

Had it not been for illness, Mervyn LeRoy would have directed this signature backstage musical. He was the one who developed most of the film, but had to hand the directorial reins to Lloyd Bacon after becoming ill—an on the verge of bankruptcy studio just couldn’t wait. Good thing he wasn’t too ill to suggest that then-girlfriend Ginger Rogers play Anytime Annie—her breakthrough role. In addition, this film launched the careers of Dick Powell and Ruby Keeler (Mrs. Al Jolson) and gave little-known choreographer Busby Berkley the opportunity to showcase his amazing talent. When all was said and done, Bacon did a fine job and the film was nominated for a Best Picture Oscar (it lost to Cavalcade).

Screenwriters Rian James and James Seymour adapted the Bradford Ropes novel of the same name into an acerbic, no-holds barred look at what really happens behind the curtains of Broadway. Their script opens with the announcement that producers Jones (Robert Mc Wade)and Barry (Ned Sparks) are launching a new show, Pretty Lady, starring Dorothy Beck (Bebe Daniels). Like most Broadway beauties, Dorothy owes her success to a rich benefactor; in this case, industrialist Abner Dillon (Guy Kibbee), who is financing the show. The producers choose Julian Marsh (the excellent Warner Baxter), a tyrannical, highly successful director but a newly bankrupt man thanks to the stock market crash, to run the show. Due to his unfortunate financial situation, Julian disregards the warnings of his doctor that too much stress could kill him and decides he must make the show a success—no matter what! And so the stage is set for a very contentious production of a Broadway show.

At the auditions we get a first-hand view of the backstage antics of show business. At the cattle call we meet choreographer Andy Lee (George Stone) and his girlfriend, chorus-girl Lorraine (Una Merkel). We also are introduced to the catty and sassy 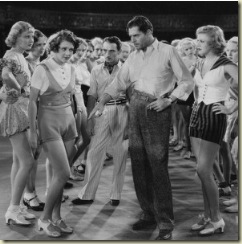 Anytime Annie (Rogers) and the innocent and inexperienced Peggy Sawyer (Ruby Keeler), who mistakenly walks into the men’s dressing room and sees a half-dressed Billy (Dick Powell) instead of the director. Fortunately for Peggy she makes quick friends with Billy, Lorraine and Annie and due to their “connections” she is selected for the chorus. Unfortunately for Peggy, Marsh is an exacting, chain-smoking director who likes to deliver overly-intense diatribes to his cast. I personally enjoy listening to Baxter deliver these not so inspirational speeches, but I can see where some might find them irritating. 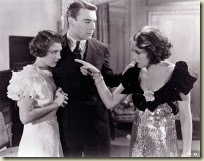 Things soon become complicated when we learn that the show’s female lead is a two-timer, who’s cheating on the show’s backer with Pat (George Brent), her former vaudeville partner. When Marsh learns about this he asks his gangster friend Slim Murphy (Tom Kennedy) to get Pat out of the way. Meanwhile, an emasculated Pat starts to see himself as Dorothy’s “kept man” and begins to show an interest in Peggy. After taking her out to dinner one evening he is confronted and attacked by Slim Murphy. When Peggy takes him up to her room to tend to his wounds she is evicted by her landlady. With no place to stay, Pat convinces Peggy to stay at his apartment. So Peggy now spends her nights trying to help Pat get a backbone and her days trying to teach Billy how to tap dance. For those of you who don’t know, Ruby Keeler was a standout tap dancer. In the end, Pat decides to leave New York and take a job in Philadelphia—which coincidentally is where Pretty Lady has its opening test run.

Soon after performing the “You’re Getting to Be a Habit with Me” number in a full dress rehearsal (which Bebe Daniels is quite good in), Dorothy sees Peggy getting into a cab with Pat and she becomes jealously enraged. This causes her to drink way too much at her pre-opening party, which leads her to slap and insult Abner. Oh, no you didn’t! Abner now demands that Marsh replace Peggy for her insolence. Really, hours before the opening? Okay, he’ll accept an apology, but first the producers have to get Dorothy away from Pat, whom she has drunkenly called to her hotel. After hearing the producers discussing how to get rid of Pat again, Peggy tries to warn the couple. A drunken Dorothy thinks she’s there to take Pat away from her and attacks her. In this tussle Dorothy takes a tumble and severely injures her ankle. What to do? 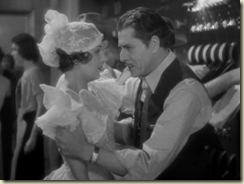 With Dorothy obviously out of his good graces, Abner suggests Anytime Annie take her place—quick work, don’t you think? But Annie doesn’t want the part and suggests to Marsh that Peggy is the only member of the cast capable of replacing Dorothy. With only five hours left until show time, Marsh and Peggy engage in an exhaustive cram session. In the end, Marsh deems Peggy somewhat capable of playing the role and declares that the show must go on. In a somewhat moving scene, Dorothy (on crutches) goes to Peggy’s dressing room to give her blessing and to give the young ingénue some sage advice about show business: success means nothing if you aren’t happy—she’s marrying Pat and leaving show business. 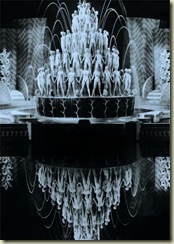 With this bit of melodrama over, the curtain rises and the film becomes a full-fledged musical, but not before the most memorable lines of the film are uttered by Marsh to Peggy: “you’re going out a youngster, but you’ve got to come back a star.” Got pressure? What follows this sage declaration are three memorable Busby Berkeley choreographed numbers, the most notable being, of course, “42nd Street” but I also enjoy “Shuffle Off to Buffalo” , which is a very risqué number—fortunately the Hays Code wasn’t in effect yet. Now, Ruby Keeler 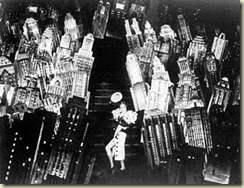 was definitely not the most gifted singer, but she does a passable job of singing “42nd Street” and her tap dancing is spectacular. “42nd Street” is the final number of the show and the stylized sets are amazing and the sheer amount of bodies involved in the number baffles one’s mind. One of the standout elements of this number is when chorus members walk up a giant platform and turn at the same time to reveal skyscraper cutouts, which creates a giant New York skyline. The show is a huge success, but Marsh is so physically drained from the ordeal of putting it together that he can’t even enjoy the fruits of his labor. Isn’t that always the case?

This film set the stage for a new type of Hollywood musical and gave birth to the unmistakable Busby Berkeley production number. When people think of 42nd Street they immediately remember the spectacular images he created. In my opinion, Berkeley is the greatest choreographer in film history.

Of course, future Hollywood stars like Dick Powell, Ruby Keeler, and Ginger Rogers got their big break here. Yet, the person I always remember as the standout is Warner Baxter. He was absolutely terrific as the tyrannically-driven director. Personally, I think this was his greatest role—much better than his Oscar winning turn in In Old Arizona. For me, he and the Berkeley production numbers are what makes this such a good film.