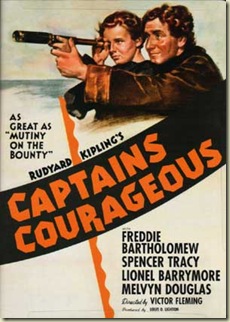 There are times when I think Spencer Tracy would have been better off if he’d never been paired up with Katharine Hepburn in 1942, when they co-starred in Woman of the Year. Now I know there are many fans of this duo, which made nine films together. I, myself, enjoy many of their films. Yet, the problem I have with this pairing is that there are so many movie fans who don’t recognize (or know about) the great work Tracy did without Hepburn. For way too many, his career is overly defined by the work he did with her. This is a shame, because he gave some of his best performances without her. As a matter of fact, in his illustrious career he was nominated for nine Academy Awards (winning twice), and only one of these nominations, Guess Who’s Coming to Dinner, co-starred Hepburn. Perhaps this oversight is tied to their off-screen romance. Whatever the case, I wish more people appreciated his non-Hepburn films.

Captains Courageous is one of those non-Hepburn films in which Tracy gives an outstanding performance. He won his first Oscar playing Portuguese fisherman Manuel in this classic MGM film, directed by Victor Fleming. An adaptation of Rudyard Kipling’s novel of the same name, the film garnered four Academy Award nominations (only winning Best Actor) and is considered one of cinema’s classic coming-of-age adventure stories. 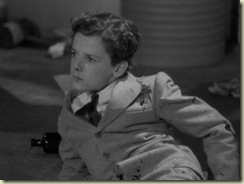 In the beginning of the film, spoiled rich boy Harvey Cheyne (Freddie Bartholomew) and his widowed, inattentive millionaire father (Melvyn Douglas) are aboard the Queen Anne and headed for Europe. Harvey is a world-class brat who thinks it’s okay to drink six ice cream sodas. Punished by the gods of the high seas for his childish gluttony, Harvey becomes nauseous and leans a little too far over the rail to spew the remnants of his tasty treat. Splash! Into the ocean goes Harvey and nobody seems to notice. His body is rescued by Manuel (Tracy), a Portuguese sailor working on an American fishing ship captained by Disko Troop (the great Lionel Barrymore). Evidently Harvey didn’t sustain a concussion, because when he wakes up he’s as pompous as ever. He demands that Captain Troop drop everything and turn the ship toward shore. Troop missed the memo that said Harvey is lord and master and so he tells the boy a foreign word—NO. Instead, Harvey is informed that he must spend the next three months aboard a ship inhabited by dead fish and unrefined sailors. Plus, he’s told he must work on the ship if he wants to eat. Oh, the inhumanity!

Put under the supervision of Manuel (who calls Harvey his little fish), Harvey refuses to do any work at all and shu

ns the friendly overtures of Dan (Mickey Rooney), the captain's son. Once hunger kicks in, Harvey starts working in the ship galley. Over time, Harvey learns to perform various jobs and is eventually taught by Manuel how to fish. On one of their fishing trips in a skiff, Harvey fouls the line of other fisherman in order to catch a large halibut and win a contest. While Harvey is basking in the glow of success, Manuel is throwing the fish back in an effort to teach his little fish a lesson. This incident provokes an amazing result: Harvey actually feels ashamed and apologizes. From this point on, the salty, singing fisherman and the young would-be sailor form a bond. As a matter of fact, Harvey grows so fond of Manuel that he doesn’t want to be returned to his father. 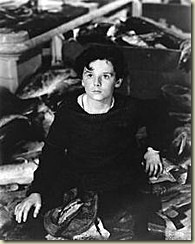 Later, when the ship learns that a rival fishing ship is trying to beat them to port in an effort to get the best prices, Captain Troop decides they must make some bold moves. He orders the sails unfurled in dangerous weather conditions. Manuel volunteers for this task. Unfortunately the weather causes the mast to crack and Manuel is mortally wounded and trapped by the sails’ canvas and ropes in the water. In a heart-wrenching scene, it is decided that Manuel must be cut loose, sending him to the bottom of the sea to his death, This scene alone was most probably enough for Tracy to win the Oscar. His tearful goodbye to his little fish just break your heart. Bartholomew is also very moving in this scene. 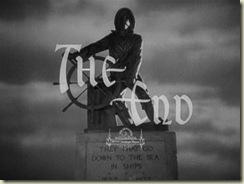 As a matter of fact, Bartholomew is exceedingly good for the remainder of the film. When the ship arrives at Gloucester, Harvey is reunited with his father. A moving memorial service is held for Manuel. It is here where the gulf between Mr. Cheyne and Harvey is closed. Mr. Cheyne sees that his son is no loner a spoiled brat, but a young man who has been profoundly changed by his experiences with Manuel.

Overall, this is a moving coming-of-age film. Tracy’s portrayal of the salt-of-the-earth (or sea in this case) Manuel is wonderful. Like many of his earlier roles, Tracy really develops this role into a memorable character. He gives Manuel many edges and does a good job of not over-playing his character into too much of a stereotype. In addition, Bartholomew is a delight to watch. Yes, his character is annoying in the beginning, but the personality changes he undergoes throughout the film seem believable. It is not easy to go from one of the most-irritating brats in screen history to a child who makes your heart break by the end of the film. Of course, Bartholomew had an excellent, seasoned co-star to help him along this difficult path. It is a shame that this film is not as well-known as it should be.