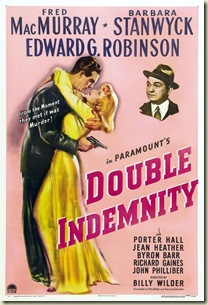 When it comes to the ultimate femme fatale you need only think of one name: Phyllis Dietrichson. Many have tried to surpass her—many have failed. In her first unsympathetic villainess role, Barbara Stanwyck set the bar so high that you can’t even measure how short oth 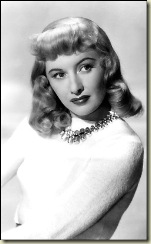 er actresses have fallen trying to be as good a femme fatale as she was in Double Indemnity (1944). One of the great travesties in  Academy Award history is that Stanwyck, who was nominated four times for Best Actress, never won an Oscar. She was nominated for this film in 1944, but lost to Ingrid Bergman in Gaslight. Many film critics believe this was a glaring oversight by the Academy, citing the outright nastiness and amoral nature of her character as the reason she was snubbed. Quite frankly, Hollywood wasn’t ready for Phyllis Dietrichson. And, when you think about it, who could ever be ready for such an evil force of nature?

Legendary auteur Billy Wilder directed this penultimate film noir, which was nominated for seven Academy Awards: Best Picture, Best Actress, Best Director, Best Screenplay, Best Cinematography (black and white), Best Sound, and Best Score. It won none. Perhaps a film about an adulterous murder plot to collect insurance money was just too much for a country at war.

With the help of the great detective novelist Raymond Chandler, Wilder adapted the James M. Cain novella Three of a Kind into one of the greatest screenplays of the Golden Age of Hollywood. Chandler and Wilder’s dialogue is searing and sharp and the overall storyline is a taut, thrilling ride down a boulevard of betrayal. In a film noir staple, the film is told in the past tense, via voiceover. The story involves a very unsatisfied (I suspect mostly in the Biblical sense) housewife (Stanwyck) and an easily enticed insurance salesman. While carrying on a licentious affair, the couple kill the husband to claim a double indemnity clause in his accidental death policy. What follows the murder is suspicion, guilt, double-crosses and bullets.

Aided by the deft cinematography of John Seitz (whom Wilder worked with on several films), Wilder captured the unseemly nature of Hollywood, incorporating several locales into the film—most notably the Hollywood Bowl and the Glendale train station. Roger Ebert has said that Seitz’s photography in this film “helped develop the noir style of sharp-edged shadows and shots, strange angles and lonely settings." Countless “venetian blind” shots are used.

The film opens with injured, Pacific 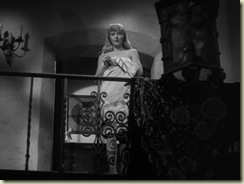 All-Risk Insurance Company salesman Walter Neff (Fred MacMurray in a rare bad-guy role) staggering into the company’s building one early Los Angeles morning to record, via Dictaphone, how and why he committed the “perfect crime” for a woman wearing blonde bangs, honeysuckle perfume and an anklet. It all started innocently enough when he accidentally met bored housewife Phyllis Dietrichson at her faux-Spanish mansion while stopping by to get her husband to renew his car insurance. In one of the more memorable film entrances, Stanwyck enters the screen wearing only a towel and a flirtatious smile. When she emerges next to “properly” meet Neff she’s 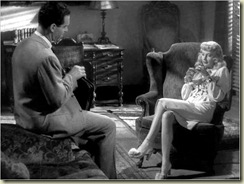 wearing a revealing dress and her signature anklet. For those of you who don’t know, the old theory was that women who wore anklets were loose women. Her use of her legs as a diversionary tactic in this scene is something that Sharon Stone would use in Basic Instinct—of course Stanwyck was wearing panties…I hope. A double-entendre conversation ensues between them about speeding cars, where Neff makes it clear he’s interested in insuring he sees her again. That is soon arranged, as Phyllis asks him to come back the next evening to speak to her husband about the policy.

Later that day Neff introduces us to by-the-book 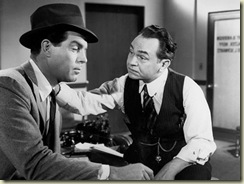 claims investigator Baton Keyes (Edward G. Robinson), a man consumed with getting every detail right and uncovering shady insurance claims. (Keyes is the man for whom Neff is recording his crimes.) While in his office, Phyllis calls and changes their appointment for the next afternoon. Strangely enough when he arrives the next day, Mr. Dietrichson (Tom Powers) is not at home again and it’s the maid’s day off. In addition, Phyllis seems very concerned about the dangerous nature of her husband’s work (he spends a lot of time in oil fields). So much so, that she asks about buying an accident policy without her husband knowing about it. Shocked by the suggestion and angry that she thought he was so stupid that he couldn’t see what she was planning, Walter huffily walks out on the blonde bombshell. 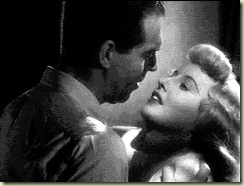 Yet, later that night when he finds Phyllis standing in his doorway (returning a hat she doesn’t seem to have) he doesn’t exactly slam the door in her face. Perhaps it was the clingy sweater she was wearing, or even the scent of wafting honeysuckle in the air. After explaining she doesn’t want him to get the wrong impression about her and that her life with Mr. Dietrichson is horrible, Walter grabs her and plants a “red-hot” kiss on her lips. Later, Phyllis explains that she often fantasizes about killing her husband with carbon monoxide poisoning in the garage. To Neff there are three bonuses to this plan: $1000,000, beating the insurance game, and having Phyllis all to himself. Presumably after they have consummated their newfound relationship (he smokes a cigarette and she reapplies her makeup), Neff agrees to help her kill her husband and make it look like an accident, but everything had to be “straight down the line” as he doesn’t want there to be any mistakes for Keyes to find.

A few days later Neff arrives at the Dietrichson house to have Mr. Dietrichson renew his auto insurance policy. Leading the unknowing husband to believe he must sign duplicate forms, Neff gets him to sign his own death warrant. The next 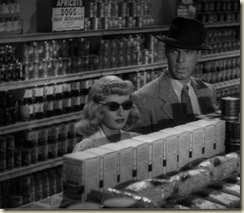 part of the plan concerns having Mr. Dietrichson take the train instead of his car on his next trip to Stanford. The double indemnity clause pays twice as much for a death that occurs on a train. They use the local grocery store as their clandestine meeting place to plan their crime. A monkey wrench is thrown into their plan when Mr. Dietrichson breaks his leg, but only temporarily. When Mr. Dietrichson decides to take his trip after all, using crutches to get around, Neff and Phyllis hatch a plan where he takes the place of the injured husband on the train. Disguised as the soon-

to-be dead husband, Neff hides in the back of the Dietrichson car while Phyllis drives Mr. Dietrichson to the Glendale train station. When she honks the horn three times he pops up from the back seat and breaks the husband’s neck. While the murder isn’t shown on screen, Wilder uses a close-up of the unflinching face of Phyllis staring straight ahead as her husband is being murdered on the seat beside her to convey the vileness of the murder. Taking the husband’s place on the train, Neff later jumps from the train when it slows down and he and Phyllis put Mr. Dietrichson’s body on the tracks. Now they just had to wait.

Although the police don’t suspect foul play, the insurance company wants to investigate to see if they can get out of paying the double indemnity clause. Keyes is assigned the case and told by the company president that they want him to find out if Mr. Dietrichson killed himself. In a meeting with Phyllis, 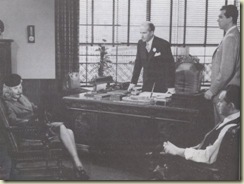 the company president explains the situation and offers to make a smaller settlement to her. Pretending to be unaware of the policy, Phyllis feigns fury and storms out. Meanwhile, Keyes doesn’t think suicide by slow-moving train is very likely and tells Neff that the case seems like a legitimate one.

Later, with Phyllis on her way to his apartment, Neff opens the door and finds Keyes. Something just popped into his head about the case: why hadn’t Mr.Dietrichson filed an accident claim when he broke his leg? Perhaps, Keyes believes, because he didn’t know about the policy but that Phyllis did. Luckily for the dastardly duo Phyllis can overhear Keyes from the hallway and she hides behind th 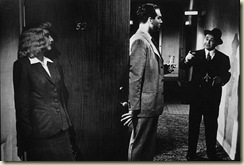 e door until he leaves. Cracks begin to appear in their relationship as Phyllis is angry that Neff suggests they not see each other while the investigation is taking place. In addition, Mr. Dietrichson’s daughter, Lola (Jean Heather), suggests to Neff that Phyllis not only killed her father but her own mother as well when she was her nurse. Oh, and by the way, step-mommy is sleeping with her ex-boyfriend, Zachetti (Byron Barr), as well. Feeling sorry for the girl and wanting to keep her quiet, Neff begins spending time with her as a substitute for Phyllis.

After putting the pieces of his investigation together, Keyes reveals to Neff what really happened in the Dietrichson case: the husband was killed by his wife and her lover. He explains to Neff every step of the crime correctly, but he doesn’t suspect Neff. Nervous, Neff and Phyllis meet yet again at the supermarket. Phyllis is highly suspicious when Neff suggest she not sue for the insurance claim and is even more suspicious about the time he has been spending with Lola. She coldly reminds Neff that their in it “straight down the line.” Neff starts to think that things would be better if Phyllis were dead, especially after Keyes determines that Zachetti was Phyllis’ accomplice. And, so the fateful 11 'o’clock meeting is set at the mansion.

With Zachetti as his fall guy, Neff determines to rid himself of the one person who can connect him to the murder: Phyllis. Shadowed by venetian blind slats, a living room of death awaits the final showdown between Phyllis and Neff. Oh, but Phyllis has her own suspicions that the double-cross is on. 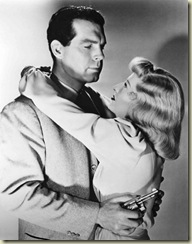 So, after unlocking the door for her accomplice, she sits down in a chair with her pearl-handled gun hidden under the cushion. When Neff arrives he informs Phyllis of his plan to off-her and frame Zachetti for everything. Really? How stupid can you be? Phyllis informs him she has her own plans and they don’t involve her death but his own. In an excellent climatic scene, Neff closes the living room blinds and when the room goes black a shot rings out. The next thing we see is Neff staggered by a bullet and Phyllis standing over him hesitating to finish him off. In a strange twist, Phyllis surrenders to her love for Neff and allows him to take the gun from her. While vulnerably embracing him some form of intelligence returns to her brain when she feels the barrel of the gun pointing at her chest. Two point blank shots to the chest and it’s “goodbye baby”. Really? I don’t like this ending at all, but it was Hollywood 1944, so what can I expect? 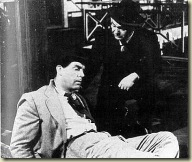 The final scene of the film finds Neff in his office with Keyes, who is shocked by what his friend has done. When Neff asks him to give him four hours before calling the police, Robinson delivers the great line: “You’ll never make the border…you’ll never even make the elevator.” He was right.

The twists and turns of this thrilling film noir are enough to make your pulse race. You pair the stellar storyline to the raw sexuality that Stanwyck brought to her role as Phyllis and this is a wonderful film to just sit and absorb. While both Fred MacMurray and Edward G. Robinson do great jobs with their respective characters, this film belongs to Stanwyck. This was, without a doubt, her greatest dramatic role. She was so good in this role that countless male fans who had loved her before seeing this film actually started to dislike her after seeing it. She and Double Indemnity are a “straight down the line” treat to watch.