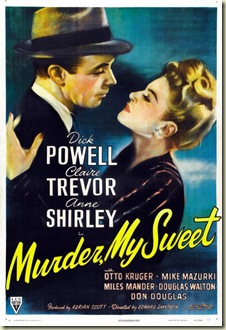 To say that sweet songster Dick Powell was cast against type in this 1944 Edward Dmytryk film would be an understatement. Powell was best known for his light comedic abilities and his crooning voice, which he exhibited in films such as the Gold Diggers series, 42nd Street, and In the Navy. Gritty was not an adjective often used to describe his performances before Murder, My Sweet (which is also known as Farewell My Lovely in England). Yet, gritty is exactly what he delivered as detective Philip Marlowe.

Kim Newman writes in 1001 Movies You Must See Before You Die that “no other film so perfectly encapsulates the pleasures of film noir, as director Edward Dmytryk deploys shadows, rain, drug-induced hallucinations (‘a black pool opened up’), and sudden bursts of violence within a cobweb of plot traps, slimy master crooks, worthless femme fatales, gorilla-brained thugs, weary cops, and quack doctors.” Her assessment is quite correct, as this film is one of the darkest and wryest film noirs I have ever seen. 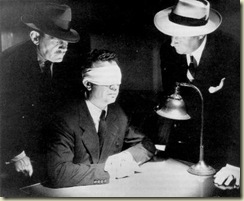 The story begins with a police interrogation of private detective Philip Marlowe (Powell). When we first see Marlowe his eyes are wrapped in bandages and he’s trying to shake himself out of a drug-induced haze. Berated by accusations and questions from Lieutenant Randall (Don Douglas) about a string of murders, Marlowe recounts (via flashback) a sordid story that only Raymond Chandler could write. 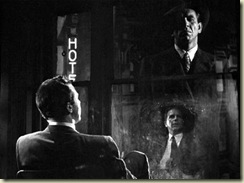 It all started when a man aptly named Moose Malone (Mike Mazurki) hired him to find a redhead named Velma. Moose had lost touch with Velma, as he’d spent the last eight years in prison—reason number one to turn the case down. They travel to a nightclub called Florian’s, where Velma used to work, but no one even recalls knowing her. 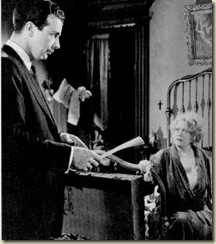 Later, Marlowe pays a visit to Jessie Florian’s (Esther Howard) house to question her about Velma. A lush, Jessie denies ever having known Velma. When describing Mrs. Florian to the police Marlowe says, “She was a charming middle-aged lady with a face like a bucket of mud. I gave her a drink. She was a gal who'd take a drink, if she had to knock you down to get the bottle.” Mrs. Florian soon changes her tune when Marlowe finds a photo of Velma hidden in a filing cabinet. Jessie goes from not knowing Velma, to saying that the girl is dead. When Marlowe mentions that he’s working for Moose, Jessie becomes visibly upset but doesn’t share any information with him. As soon as Marlowe leaves, she makes a frantic phone call which Marlowe views from outside—reason number two to turn the case down.

Back at his office Marlowe meets a new client: “Pretty Boy” Lindsay Marriott (Douglas Walton). He needs Marlowe to go to a secluded canyon with him to deliver a ransom for stolen jewels. Really, you took this case, too? While attending to this job, Marlowe is knocked out—not a surprise, I’m sure. When he awakens he finds a woman standing over him. After she promptly runs away he also finds “Pretty Boy” dead in the car. When the police arrive, Lieutenant Randall is incredulous about Marlowe’s story. Then, showing Grade-A police work, he warns Marlowe to stay clear of another suspect named Jules Amthor (Otto Kruger), a quack doctor. 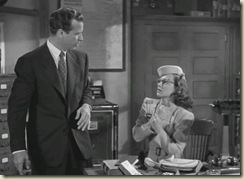 Perhaps Marlowe should just stay away from his office, because on his next visit there he is greeted by a woman pretending to be a reporter. In reality she’s Ann Grayle (Ann Shirley) and she’s looking for her stepmother’s stolen jade necklace. Wanting to meet the stepmother, Marlowe has Ann take him to the family house. Once inside the sprawling estate, Marlowe doesn’t need a picture drawn for him: Mr. Grayle (Miles Mander) 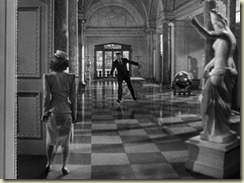 is an old man and his wife, Helen (Claire Trevor), is a bright, young thing. Evidently Mrs. Grayle was robbed at gunpoint for her $100,000 necklace and “Pretty Boy” (a close personal friend, of course) was asked to pay the ransom. Marlowe starts to see a connection when Mrs. Grayle tells him that “Pretty Boy” was a patient of Jules Amthor. Oh, and guess who shows up for a visit just about this time: Amthor.

Stepmother and stepdaughter don’t like one another—not difficult to see as Mrs. Grayle could be Ms. Grayle’s slightly older sister. Ann Shirley plays her character like a slightly-sexed up librarian. By far the best role of her career, it was also her last, a child actor since infancy she retired at the ripe old age of 26. It is interesting to me that her last role would have “mommy-issues” since she herself had the mother from hell. Anyway, both women vie to hire Marlowe to track down the necklace. In the meantime, 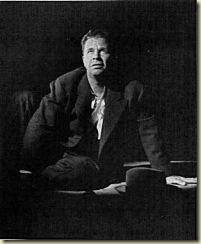 Marlowe meets up with Moose again, who is working with Amthor, and they go to Amthor’s apartment. Once there, Marlowe accuses the “doctor” of cooking up a blackmail scheme with Marriott and then getting rid of his partner. When he sees that Marlowe doesn’t have the necklace, he knocks the detective unconscious and then proceeds to lock him up in a room and pump him full of drugs.

After escaping, Marlowe pretty much falls down a flight of stairs and finds a gun in another doctor’s office and then stumbles out into the street where he meets Moose. After telling Moose that Amthor is the key to finding Velma, Marlowe 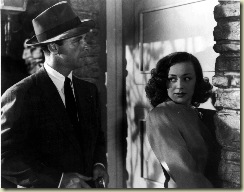 is helped into a cab, which he takes to Ann’s apartment. Once there, he tells Ann that he knows she was the woman he saw in the canyon. She admits being there and taking Marlowe’s card off Marriott’s dead body, but she didn’t kill anybody. When they go to her father’s house they find him perturbed by the news that Marriott had been living in his beach house without his knowing it—Mrs. Grayle, however, did know. Feeling like a cuckolded husband, Mr. Grayle asks Marlowe to drop the case. But Marlowe must clear his name and so he and Ann take a trip to the beach house. Things turn romantic between the slightly-less librarian-esque Ann and Marlowe and they share a kiss, but she thinks he’s just after information. While they are arguing Helen appears and the two women trade insults—I specifically remember hearing the words 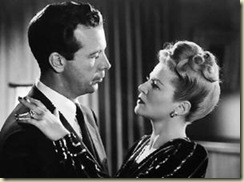 gold digger and something about a slip showing before an insulted Ann stormed out. Now our cheating wife is left with Marlowe to confess her infidelities (evidently there’d been many) and that she was indeed being blackmailed by her analyst, Dr. Amthor—can anyone say malpractice? Exhibiting her skill in infidelity, Helen kisses Marlowe and asks him to help her get rid of Amthor by luring him to the beach house the next evening. He agrees.

When Marlowe goes to speak with Amthor, he finds the doctor with a snapped neck. He also finds a signed photo of Velma on a desk just as Moose appears in the room—Big hands, small neck…you do the math. Moose claims that the woman in the photo is not his Velma. Marlowe, however, promises to reunite Moose with his Velma and takes him to the beach house and has him hide outside. Inside the house, Marlowe finds Helen with the necklace—surprise, she had staged the robbery. Oh, but Marlowe has his own surprise when he calls her Velma and informs her that she killed Marriott when he 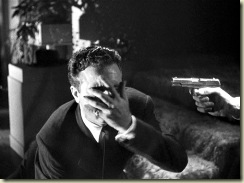 refused to kill the detective. Evidently she didn’t want to be found and had learned from Mrs. Florian’s drunken call that Moose and Marlowe were looking for her. Had it not been for Ann stumbling on the scene in the canyon, she would have killed him, too. Surprise—Helen has a gun and she shows it to Marlowe. Ah, but the cavalry has arrived—Mr. Grayle and Ann emerge just as Marlowe is about to say hello to Helen’s little friend. Mr. Grayle promptly shoots his wife, which brings Moose rushing into the house to find his Velma dead. When Moose comes after Mr. Grayle, Marlowe steps between them and when the gun goes off he is blinded. All he can hear is gunshots. Who made it out alive? Well, obviously Ann did because Lieutenant Randall tells him that she has corroborated everything he said—except of course, that both Moose and Mr. Grayle were dead, since he couldn’t see that part of the melee. 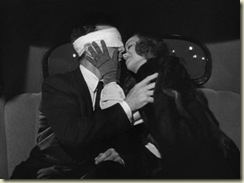 In one of the stranger film noir endings (a happy ending?), Marlowe is being guided out of the police station by Randall and he keeps talking about how sweet a girl Ann is without knowing she is right behind him. When he’s put in a cab she joins him. And, putting the clues together, namely the smell of her perfume, he gives her a kiss.

Dick Powell is stellar as wry detective Marlowe. The wisecracks that emerge from his mouth are laugh out loud funny. For example, when discussing Mr. Florian, he says: “He died in 1940, in the middle of a glass of beer. His wife Jessie finished it for him.” Another strangely funny scene is when he plays hopscotch at the Grayle mansion on the marbled floor. I also enjoyed watching him use Cupid’s derrière to light a match. Powell plays Marlowe with the right combination of street-smart toughness and wicked mischievousness. In my opinion, his Marlowe is the most balanced of all that have graced the silver screen.

I often wonder what happened to Marlowe and Ann. Did he later learn that after her father killed Moose that she then killed him so she could inherit everything and have Marlowe as well? I mean, that would have been the more appropriate ending for a film of this sort. She’s the one who said she hated men and she didn’t seem overly upset that her father has just been killed. Yet, she’s smooching it up in the back of a cab not long after a triple homicide? I’m just saying…