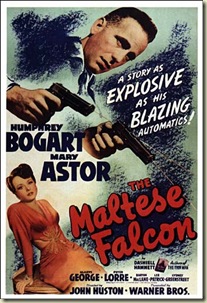 Considered by many as the first Hollywood film noir, The Maltese Falcon (1941) was John Huston’s directorial debut. What a way for a director to emerge out of the shadows!

Besides directing one of the best detective films ever, Huston also wrote the Oscar nominated screenplay, which was adapted from the 1929 Dashiell Hammett novel of the same name. Nominated for Best Picture, the film stars Humphrey Bogart as immortal detective Sam Spade. Bogart and Huston worked well together and made four more legendary films together: Key Largo, The Treasure of the Sierra Madre, The African Queen, and Beat the Devil. 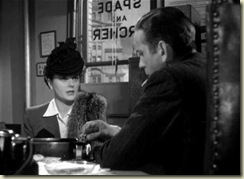 Set in San Francisco, the film quickly introduces us to detective Sam Spade (Bogart) when his secretary, Effie (Lee Patrick), announces a new client, Miss Wonderly (Mary Astor). For those of you who have seen the entrance Astor makes, take a moment and imagine Geraldine Fitzgerald (Ann from Dark Victory) making that same entrance. No, it doesn’t work for me, either. Yet, Fitzgerald was originally cast as Ruth. Thankfully fate stepped in and allowed Astor to play her greatest role ever. Ruth has come to the Spade and Archer (Jerome Cowan) detective agency to find her missing sister, who has run away with a shady (and according to Miss Wonderly, violent) dark-haired and bushy eyebrowed character named Thursby. Asher agrees to follow her to her meeting with Thursby at the St. Mark Hotel. Big mistake. Soon Archer is looking down the barrel of a gun and is gunned down in cold blood. The fact that we don’t see the face of the assailant is a typical film noir device and sets up one dynamite ending. 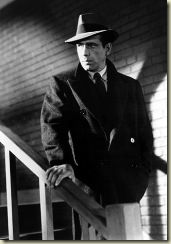 Another classic film noir element is displayed when Spade goes to the scene of the crime: a shadowy deserted alley with one streetlight. After Spade is informed by Sergeant Polhaus (Ward Bond) that Archer must have known his killer because his gun was still holstered, he calls Miss Wonderly’s hotel and learns that she has checked out. The next morning he awakens to accusations from the police and the news that Thursby has also been murdered.

But wait, they aren’t the only ones who suspect Spade may be a killer. Archer’s wife Iva (Gladys George) thinks Spade killed her husband so they could be together (they were having an affair). As Iva sniffles on, Miss Wonderly calls to let Spade know she’s moved to the Coronet Apartments under an assumed named: Miss Leblanc, 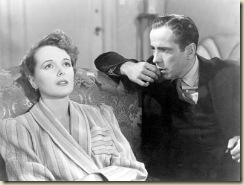 been forthcoming about Thursby. It would seem that she met him in the “Orient” and hired him to protect her. She lays it on thick and convinces (with the aid of money) Spade not to tell the police about her. He agrees, but he knows there’s more to the story.

Back at the agency, Spade meets Joel Cairo (Peter Lorre), a gay man who at first offers Spade $5000 to find a statue of a black bird but then pulls a gun on him. Now, this film was made in 1941, so it is surprising that Lorre was allowed to play his character so stereotypically gay. Anyway, after being knocked out by Spade, Cairo hires him to help find the black bird.

Later, Spade returns to the Coronet and finds Brigid in the sharing mood: she’s really a bad girl dressed up in a helpless woman’s body. No, you don’t say? Spade informs her of Cairo’s offer and she offers him more than money. This is followed by a rather brutal kiss by Spade and a demand that she start being honest. She does this by agreeing to meet Cairo.

At this meeting we are introduced to a new character’s name: the Fat Man. We also learn that Brigid and Cairo hate each other—this shows a whole new, nasty side of Brigid. After being slapped rather 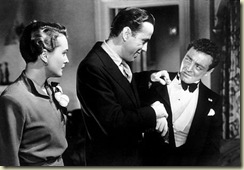 hard by Brigid, Cairo pulls out his gun, only to be disarmed yet again by Spade—and for good measure Spade slaps him three more times and utters the classic line, “When you’re slapped, you’ll take it and like it.” Meanwhile, Brigid gets her well-manicured hands on Cairo’s gun just as the police arrive to question Spade about his affair with Iva. This allows Cairo to escape and for Spade to press Brigid about how she became involved with Cairo. A story of double-crosses ensues. Not deterred by this woman who admits she’s always been a liar, Spade spends the night with her.

The next day Spade goes to Cairo’s hotel and notices the man whose been tailing him (Wilmer, played by Elisha Cook, Jr.). Deducing that he works for the Fat Man, Spade tells him to tell his boss that he’s looking for him. This must have worked because when he returns to the agency he has a message from Mr. Gutman, a.k.a the Fat Man. He also learns from Brigid that someone has ransacked her apartment (Cairo). 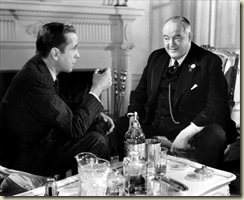 where he is greeted at the door by Wilmer. When he finally meets Gutman, it is easy to see why he’s called the Fat Man—or Gutman for that matter. All 300 lbs. of Sidney Greenstreet earned a Best Supporting Actor nomination for his portrayal of this strangely polite but menacing man. Spade doesn’t learn much from this meeting, but he learns that the black bird is extremely valuable. 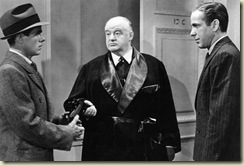 After being harassed by the police yet again, Spade is once again picked up on the street by a gun-wielding Wilmer. After disarming the poor sap, Spade fully embarrasses him in front of Gutman. Appreciative of Spade’s manner, Gutman finally reveals the long (and I mean long) history of the Maltese Falcon (the black bird) and the fact that he’s been obsessed with having it for 17 years. He offers Spade $50,000 to bring it to him. Ah, but it is only a ruse to allow the drugs in Spade’s drink to take effect. With Spade passed out on the floor, Gutman, Cairo and Wilmer head off to find the bird themselves. When Spade wakes up he finds a newspaper clipping about a boat coming in from Hong Kong and surmises this must be where Gutman is headed. When he arrives at the docks he finds the boat ablaze.

Back at the agency, Spade is shocked when a fatally injured man (Captain Jacobi played by Huston’s father Walter Huston) stumbles into his office and delivers the falcon to him. Soon thereafter Brigid calls to tell Spade where she’s at, only to scream at the end of the call. First he stows the falcon at a bus terminal, then he goes in search of Brigid. When he arrives he finds an empty lot and the bells finally chime as to the fact that Brigid is indeed a liar. Yet, when he finds her hiding in a doorway near his apartment he still takes her into his apartment, where he finds Wilmer, Cairo, and Gutman waiting for him when he turns on the lights. And so the scene is set for one of the greatest endings in film history.

After informing the crew that he has the falcon, he demands that they come up with a fall guy for the murders. He suggests Wilmer, but Gutman refuses (evidently the term gunsel, which is used by Spade to describe Wilmer, was a homosexual term for a young man kept by an older one that morphed into a term for a gangster) at first but then 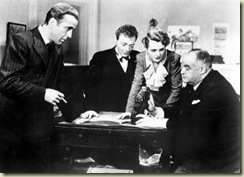 gives into the demand. Then the whole sordid mess is revealed: Brigid had given the falcon to Captain Jacobi in Hong Kong, knowing it would follow her there later, and returned to San Francisco with her partner Thursby. Gutman had Wilmer kill Thursby to get Brigid to work with him. When they saw the newspaper notice about the boat they met Brigid and Jacobi there and she agreed to work with them, but she double crossed them and had Jacobi (who was shot by Wilmer) deliver the falcon to Spade. The reason for the cryptic phone call: they wanted to get him out of the office before Jacobi arrived but the phone call came too late.

With the loose ends tied up and $10,000 in his hands, Spade has Effie bring the falcon to his apartment, where it is revealed that it is a fake! At first all hell breaks lose and there are many tears and recriminations, but then Gutman composes himself and demands his $10,000 back from Spade and he and Cairo leave. Spade calls the police to alert them to this fact, so they can pick them up. Using this as leverage against Brigid, Spade demands that she tell him the truth about Archer before the police arrive. Evidently she hired Archer so she could tell Thursby he was being followed, which would cause him 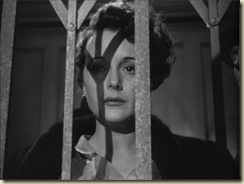 to confront Archer and perhaps kill him, which would allow her to be rid of him before the falcon arrived. But Thursby didn’t do this, so she had to take matters into her own hands and so she killed Archer in order to pin it on Thursby. The truth revealed, Brigid declares her love for Spade and begs him not to turn her in. Ah, I might love you baby, but I can’t trust you, so you’re going down—basically Spade’s answer to her plea. In the closing scene, the most overt example of film noir technique, Brigid is led into the elevator by the police and when the steel cage is pulled down in front of her it casts jail bar shapes across her face. Oh, the look on that lovely face! In the word of MasterCard: priceless.

This was actually the third film version of Hammett’s classic novel. Ricardo Cortez played Sam Spade in the 1931 version and Warren William played him in Satan Met a Lady (1936). I’d be remiss if I didn’t mention that this film has so many connections to Bette Davis it’s hard to keep track. In one scene in this film we see a film marquee for The Great Lie, which starred Davis and Mary Astor (who won a Best Supporting Actress Oscar for her role). This ties into the fact that Davis played the femme fatale in Satan Met a Lady.

In regards to film noir elements, the film is not overwhelmingly dark and there isn’t an overabundance of shadows. Yet, the core principles of an anti-hero who follows a code of honor (his own) who reaches into the underworld and deals with all sorts of unseemly characters and situations is at the core of this story. That Spade emerges in the end as a jaded but somewhat still respectable character is classic film noir. In addition, you have Mary Astor playing the epitome of the femme fatale (perhaps only surpassed by Stanwyck in Double Indemnity) and Lorre and Greenstreet as some of the most colorful and outrageous criminals ever imagined.