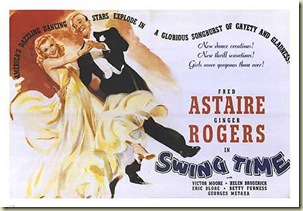 If you don’t think Top Hat is the best Fred and Ginger film ever, then chances are you think that honor belongs to Swing Time. To many it is a toss up. I, of course, prefer Top Hat, but there are many who say Swing Time is better. In regards to political correctness, Top Hat is the one that stands the test of time, as Astaire performs in blackface in Swing Time. So, let the debate begin…once I give this film the once over, of course.

Based on the Elwin Gelsey story “Portrait of John Garnett” (screenplay adaptation by Howard Lindsay and Allen Scott), the film was directed by George Stevens (he needed a break—he’d just finished working with Katharine Hepburn). The charming dance numbers are the beneficiary of an excellent soundtrack by Jerome Kern and Dorothy Fields. “The Way You Look Tonight” took home the 1936 Oscar for Best Song and Hermes Pan was nominated for Best Dance Direction for “Bojangles of Harlem”. Besides these two great routines, there is also “A Fine Romance”, “Pick Yourself Up”, “Waltz in Swing Time”, and “Never Gonna Dance”.

The plot is very thin, but thankfully Fred and Ginger’s dancing make you forget this. Astaire plays John “Lucky” Garnett, a vaudeville “hoofer” who wants to be a professional gambler. He also wants to marry his rich girlfriend Margaret (Betty Furness), but he and his wedding trousers are sidetracked by his dancing partners who don’t want him to quit the business. He arrives hours late to the wedding and is informed by Margaret’s father, Judge Watson (director George Stevens’ father Landers Stevens) that there isn’t going to be a wedding. Lucky and the judge then come to an agreement: if Lucky goes to New York City and makes $25,000 then the judge will reconsider.

So, off to the big city goes a broke Lucky, his lucky quarter, and his best pal, Pop (Victor Moore). Once in New York they soon meet Penny Carol (Rogers), who promptly tries to have them arrested for theft. Lucky is still in his wedding clothes, so the officer doesn’t believe her. Miffed, Penny strides off to her job at the Gordon’s Dancing Academy with Lucky in hot pursuit. Upon entering the studio Lucky encounters receptionist Mabel (Helen Broderick), who offers him a free dance lesson in hopes that he’ll enroll in a $45 course. Seeing Penny’s picture on the wall, he asks to take his free lesson with her. An infuriated Penny must endure his faked ineptitude, which leads to the film’s first musical number, 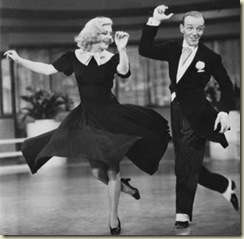 “Pick Yourself Up”. Many critics have said this song was a nod to people trying to endure the Depression. With lyrics like: “Don't lose your confidence if you slip/Be grateful for a pleasant trip/And pick yourself up/Dust yourself off/ Start all over again” it is easy to see where they may have gotten that idea. When Penny is fired by the dance studio’s owner, Mr. Gordon (Eric Blore), for insulting him, Lucky steps in and shows off what he’s “learned” from Penny. In a fluid shot, Stevens captures the duo as they do their famous swinging twirl and leap over the dance railings. Mr. Gordon is so impressed that he decides to send the duo to his friend Simpson’s (Pierre Watkin) Silver Sandal club for an audition. To get a dinner jacket for the audition, Lucky tries to gamble but ends up losing his pants in the process. No audition and Penny is yet again angry with him. 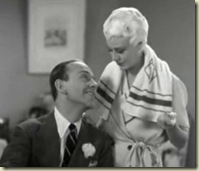 Fast forward a bit and you find Lucky and Pop picketing outside Penny’s room. With the help of Mabel, Lucky finds his way into her room and tries to convince her to give him (and their dance partnership) another shot. And what’s the best way to convince an angry woman to reconsider slicing your heart open with her stiletto? You serenade her with “The Way You Look Tonight”. Penny, soapy hair and all, forgives him and agrees to a new audition. Too bad Ricardo (George Mataxa), the band leader at the Silver Sandal, is in love with Penny and won’t play for the 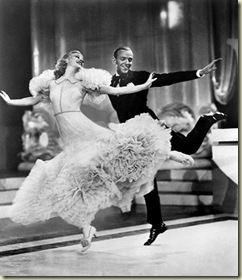 duo because he’s jealous of Lucky and because his contract now belongs to Dice Raymond (John Harrington), another night club (and casino) owner. So, Lucky gambles Dice Raymond for Ricardo’s contract—and wins. The first musical piece he conducts for his new boss is “Waltz in Swing Time”. This waltz is definitely in “swing time”, as it is lighting fast with Astaire and Rogers doing some very nimble foot work and interesting gliding back kicks, amongst their usual twirls. It is a breathtaking dance, both figuratively and literally. 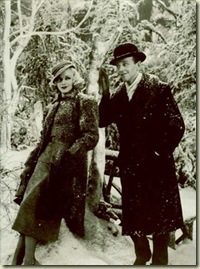 Later in the film the duo travel with Pop and Mabel (an odd couple if there ever was one) to a rundown lodge. It is the middle of a snowy winter and they are driving in an open convertible—really? Of course, by this point in the film Penny and Lucky are in love, but he’s giving her advances the brush-off because of his engagement to Margaret. Having all of her romantic advances rebuffed is too much for Penny and she begins singing “A Fine Romance”. The song is very sarcastic and well, cute: she wants them to be hot tomatoes and he wants them to be cold potatoes. Eventually, Pop lets her in on the fact that Lucky is engaged—just as Lucky decides to give in to his feelings.

Back in the city they begin performing at the 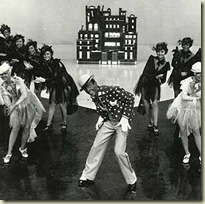 Silver Sandal and continue their flirtation. It is at this point in the film that today’s viewer may become a bit uncomfortable, as Astaire performs in blackface in "Bojangles of Harlem". What today’s viewer doesn’t know is Astaire did this as a tribute to the African American tap dancer Bill Robinson. It is an excellent solo number for Astaire and the set design was inspired. 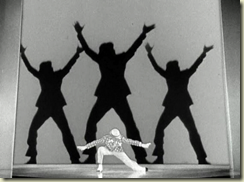 Tap dancing amongst twenty four singing chorus girls dressed in half black and half white, Astaire showcases his wonderful tap work. Later in the number, Astaire performs a shadow dance amongst three screen projected shadows and outduels (or better yet, out-taps) them all. This is the only time he ever did a blackface number in a film. Anyway, at the end of the number Lucky notices that Margaret is in the audience. Uh-oh.

In a very quick amount of time a lot happens. Lucky loses Ricardo’s contract to Dice and Penny is introduced to Margaret. Both of these events convince Penny that she should marry Ricardo and finally be done with the gambling (and engaged) Lucky. 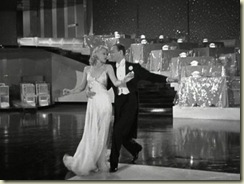 When Lucky learns that Penny is going to marry Ricardo he convinces her to have one last dance with him when he starts singing “Never Gonna Dance”. This is perhaps the most “emotional” dance the duo ever performed together. As long as they continue this dance their romance can go on, but if the dance ends so does the romance. And, so this is one of the longest numbers the duo ever performed together. All of their earlier dance routines are intermingled with 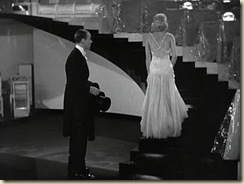 this one. It is awesome to watch this, as well as when they spin their way up a curved staircase and end the number in what can only described as an explosion of twirls. At the end, she runs away from him. It is rather devastating to watch…but then you remember it’s Fred and Ginger: I know there’s a happy ending somewhere! Okay, but we still must talk about Ginger’s dress in this number. Ten trillion times better than the Ostrich number 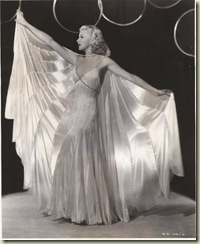 from Top Hat, this low-cut, white satin gown was designed by Bernard Newman and it is one of the all-time greatest film gowns EVER! With cross-your-heart pleats and a cut to die for, not to mention a startling cape that was connected by a rhinestone choker, this is the ultimate “I’m just too damn sexy” dress.

But back to the story, in the end Margaret tells Lucky she doesn’t want to marry him, which frees him up to steal Ricardo’s pants before his wedding to Penny. In a rather quirky, but very sweet, ending, the two end up serenading one another with the other’s song, he sings her “A Fine Romance” and she sings his “The Way You Look Tonight”.

This is my second favorite Fred and Ginger picture. It is a lot like Top Hat, especially with the art deco set designs and the usual plot devices. I don’t know if I can make a definitive statement as to which number, “Cheek to Cheek” or “Never Gonna Dance”, is the greatest. Both are spectacular, but Ginger does wear that itchy ostrich dress in “Cheek to Cheek”. Oh, well, I’d like to hear what you think on this subject…and anything else you might have to add.