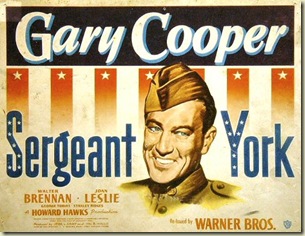 World War II had been going on for over two years when Sergeant York was released in the United States on September 27, 1941. The Germans had defeated my beloved French quite handily in the spring of 1940 and they had tried to obliterate the British throughout the fall of 1940. As this film entered American theatres the Russians were preparing themselves for a German push toward Moscow. And, in the Pacific, the Japanese had had enough of the US trade embargo that limited their access to petroleum and mineral ores—they decided to fully prepare for a war in the Pacific and began war games which would eventually lead to the event that transpired on December 7, 1941: Pearl Harbor. The United States, of course, was still a “neutral” country when this film came out, but it was becoming quite obvious that it was only a matter of time before they too would enter the fray.

Producer/director Howard Hawks had the perfect vehicle to submit to a traditionally isolationistic nation. Just like the hero of this film, 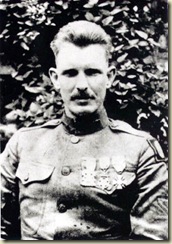 Alvin York (Gary Cooper), the United States was usually peace-loving. Yet, when the Germans went crazy in 1917 and sent the Zimmermann Telegram to Mexico and reengaged in unrestricted submarine warfare, America had to defend itself and its principles against tyranny. Thus, the nation entered WWI and the real-life Sgt. Alvin York had to become a Dough Boy and go “Over There”. Everyone knew in 1941 that we would be going “Over There” very soon, so why not make a picture that reminded Americans that sometimes you have to fight to ensure peace?

Nominated for eleven Academy Awards, including Best Picture, this film follows the exploits of a backwoods Tennessee farmer to the trench-filled Western Front. Alvin York is an ambitious young man who only wants to raise enough money to buy bottomland from Mr. Tomkins (Erville Alderson) and then marry 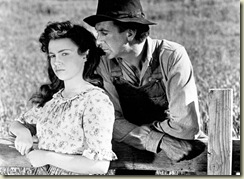 Gracie Williams (Joan Leslie). Given 60 days to come up with the necessary funds, York works himself like a dog. Yet, as time starts to run out he has to come up with some way to make fast money, and so he enters a turkey shoot hoping to win a prize steer. In a remarkable show of marksmanship, York wins the contest and raises the necessary money to buy his land. The problem is Mr. Tomkins has already sold the land. Feeling betrayed, York gets drunk and seeks revenge against those who stole “his” land. Riding out into a wild thunderstorm, York finds himself and his gun under assault by 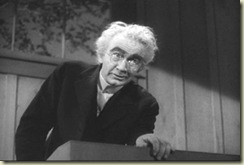 lightning bolts. One in particular hits his gun and knocks York off his horse. When he picks himself up off the ground he hears singing coming from the local church. When he stumbles into the church, Pastor Pile (Walter Brennan) and the congregation welcome York to his new Christian life. Believing Divine Intervention has stepped in the way of his committing murder, York become a Christian pacifist.

After turning over a new leaf, York finds his fortunes changing: he works out a sharecropping deal to buy the land he lost and Gracie

agrees to marry him. But then the war in Europe steps in the way and York finds himself in a difficult situation. How can a Christian go to war when the Good Book is against killing? Even though York declares himself a conscientious objector, the Army still reluctantly wants him. Once the Army sees what York can do with a rifle they no longer have any reluctance at all. Yet, after having a discussion with York about what the Bible says about war, the camp commander, Major Buxton (Stanley Ridges), 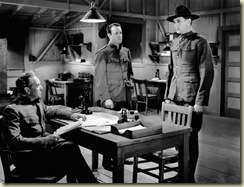 gives him a 2-week pass to reconsider his position. If he still wants out of the Army after his leave is up, the Major will allow it. On leave, York has another moment of Divine Intervention when the wind blows his Bible open to Matthew 22:21: ““Render unto Caesar the things which are Caesar’s, and unto God the things that are God’s”. Seeing this as a sign, York returns to the Army ready to serve his country.

In the trenches of France (specifically the Meuse-Argonne Offensive of 1918), York finds himself surrounded by death and

killing. Menacing machinegun fire just rips to shreds anything that peaks out of the trench or tries to cross the dreaded “No Man’s Land”. When York’s unit tries to flank a German machinegun nest, both the commanding officer and first sergeant are injured so severely that York must take command of the few men who are still alive in his unit. Virtually single-handedly York picks off the gunners by crawling around the machinegun nest. In the end, the few remaining German soldiers surrender to York. Behind enemy lines,York and his men work their way back to 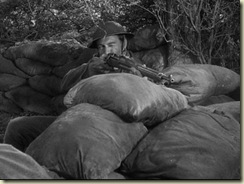 His daring exploits are rewarded with the Medal of Honor and the Croix de Gurre. He is also sent back to the States to show Americans what a real hero looks like. When he returns to Tennessee he finds that the state has turned his undeveloped bottomland into a farm as a reward for his heroism. 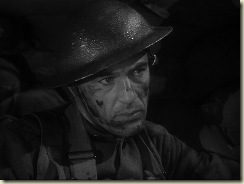 Gary Cooper’s portrayal in this film earned him his first Academy Award. Playing a stereotypical country bumpkin with a very strong conscious, Cooper is at times a bit too earnest for my liking. However, very few men could play the reluctant hero as well as him. His scenes with Walter Brennan (who was nominated for Best Supporting Actor) where they discuss the Bible as it relates to the modern world are the most enjoyable to watch. It is interesting to note that the real Sergeant York handpicked Cooper for this role and served as an adviser on the film. When you read excerpts of his diary (which he kept while in the Army), it is not difficult to see why Cooper played him so humbly.

The battlefield scenes were expertly filmed and edited by Sal Polito and William Holmes respectively. Holmes won an Academy Award for his deft editing and Polito was nominated for his photography. When I was a middle school teacher I would show this film as an example of what warfare was like in WWI. The constant bombardment and never-ending trenches, with mangled barbed wire strewn everywhere, are something to behold. You combine these elements with a terrific Max Steiner score (another Oscar nominee), and you have, at times, a visually stunning film to watch.

This film could not have come out at a better time. It was a reminder of what war really looked like and how ordinary men could be compelled to do extraordinary things.