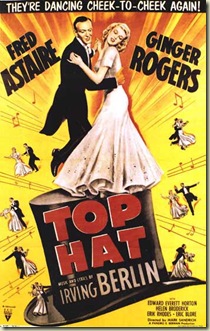 When considering the Fred and Ginger phenomenon, one need only remember what Katharine Hepburn said about the duo: “She gave him sex, and he gave her class." Alone, he was far from sexy and she wasn’t close to genteel. Yet, when you put them together, all of that fell away and you saw a beautiful, sophisticated couple. All told, they made 10 films together—most of which were quite good. Their chemistry, both dancing and romantic, is undeniable and has stood the test of time. That is why today they are still regarded as THE greatest dance team ever.

Director Mark Sandrich obviously worked well with the duo, as he directed five of their films. Working from a witty screenplay penned by Allan Scott and Dwight Taylor, based on the Alexander Farago and Aladar Laszlo play The Girl Who Dared, Sandrich’s deft directorial decisions about how the film should be shot made Top Hat the duo’s biggest box office success, as well as their most critically acclaimed film. It was nominated for four Academy Awards (Best Picture, Best Interior Decoration, Best Song, and Best Dance Direction), but won none. 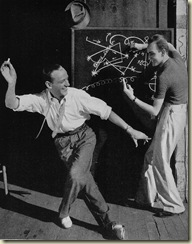 the film to five wonderful Irving Berlin songs: “Top Hat, White Tie, and Tails,” Cheek to Cheek,” “No Strings,” “Isn’t This a Lovely Day To Be Caught in the Rain,” and “The Piccolino.” All the musical numbers seem to seamlessly meld in with the progression of the story—which I find to be a huge plus.

The plot revolves around a simple case of mistaken identity, which complicates a budding romance born out of an accidental meeting. Doesn’t sound too simple to you, eh? Trust me, it’s Fred and Ginger, so it’s definitely simple.

In the beginning, we meet Broadway star Jerry Travers (Astaire) as he’s hanging out in a VERY British gentlemen’s club waiting for producer Horace Hardwick (the always 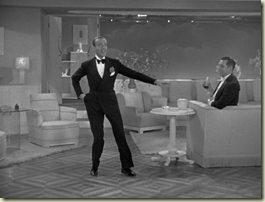 funny Edward Everett Horton). After the two meet up and go to Horace’s hotel, Jerry learns that Horace’s wife Madge (Helen Broderick) wants him to come to Italy and meet a woman she’s picked for him. Jerry’s not interested in this, as he has a strong aversion to “strings.” Thus, Astaire starts singing “No Strings” and does a bit of noisy tap dancing. This awakens the lady sleeping in the room below, Dale Tremont (Rogers). Thus, Jerry and Dale meet when she angrily knocks on the door to complain. She thinks he’s a flake, he thinks she’s wonderful and rethinks the whole “strings” aversion.

The next day we find Jerry buying flowers (from Lucille Ball nonetheless) and being rebuffed by Dale when he offers to take her to a riding club. Not deterred, he decides to pretend to be the hansom cab driver. She recognizes him by his tapping feet, but isn’t that angry. Later, as she’s riding a storm breaks out and she seeks cover. Jerry attempts to come to the rescue, but she gives him the cold shoulder. That is, until a 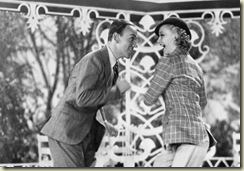 loud clap of thunder sends her into his arms. Once she recovers herself, her icy nature is even worse. To pass the time and make her loathe him a tad less, he sings "Isn't This a Lovely Day”. Once finished with the warm-up number, he begins whistling and trying to get her to dance with him. Eventually she gives in and they perform a sort of shadow dance, mimicking the other’s moves. This number just goes to show that Rogers was just as good a dancer as Astaire, which many people seem to overlook. There is a quote I heard somewhere about how Rogers may have even been better because she danced backwards and in high heels. Anyway, by the end of the scene they are on friendly terms.

Back at the hotel Dale gets a telegram from Mrs. Hardwick suggesting she look up her husband at the hotel. After much confusion, Dale begins to think that Jerry is Mr. Hardwick—oh, no you didn’t! Slap! Not given the courtesy of knowing why he’s been 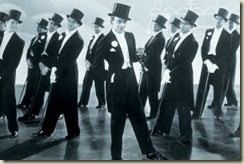 slapped, Jerry is flabbergasted. Still, not deterred, when he learns that Dale is headed to Venice, he demands Horace take him there right after the next number: “Top Hat, White Tie, and Tails.” Of course, top hat and tails were Astaire’s trademark look, so this is one of his quintessential numbers. Backed up by an entire male chorus wearing top hats and tails, Astaire tap dances (cane in hand) in front of a Parisian backdrop (Eiffel Tower included). It’s interesting to watch Astaire wield his cane as a weapon and the dancing sequence is spectacular.

With a quick dissolve, we find ourselves looking at an interesting Art Deco set of what RKO thought Venice should look like. Evidently everything there is a glowing white color. Anyway, after arriving in Venice Dale informs Madge about her husband and the two cook up a plan to teach him a lesson. Of course, Dale 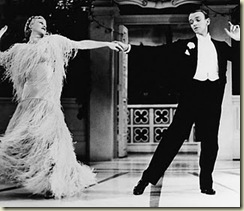 still thinks Jerry is Horace and what ensues is a comical game of cat and mouse. At one point, Madge pushes the two to dance together and Jerry finds himself “in heaven”; and, thus starts the spontaneous “Cheek to Cheek” duet. And so the ostrich feathers start to fly! Yes, I know this dress is legendary (for many reasons), but I just hate it! It does work very well in the dance, but it looks itchy and I can’t watch this great number without wanting to scratch. It is a seductive dance that is symbolic of the courtship and eventual consummation of a romance. A mixture of classic ballroom dancing and innovative modern (for that time) dance, it is the signature Fred and Ginger performance. At the end of the dance, Dale is crestfallen when she realizes she’s in love with a married man—one who proposes to her. Oh, no you didn’t! Slap—again.

To escape her conundrum, Dale decides to marry her designer, Alberto Beddini (Erik Rhodes). After learning that the woman he loves has married another man because she mistook him for Horace, Jerry decides he must rescue Dale before she can consummate her marriage. His rescue plan: to dance as loud as possible above the bridal suite. This angers Beddini, a master fencer, and he goes to challenge Jerry to a duel. This give Jerry the opportunity to kidnap 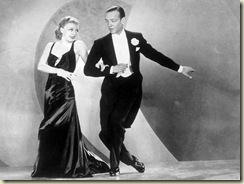 Dale in a gondola and for the rest of the cast to pursue them in a motorboat low on petrol. So, while everybody else is out to sea, Dale and Jerry return to the hotel to watch a group of dancers perform “The Piccolino”—they eventually join in on the number. With a nod toward Busby Berkeley, Sandrich uses overhead camera shots to capture the dancers forming patterned images. They will reprise this number at the end of the film, after it is revealed that Dale and Beddini aren’t actually married. Happy ending!

Overall, the musical numbers are top notch. The standout number is, of course, “Cheek to Cheek”, but the other numbers are of a high caliber as well. Irving Berlin combined with Astaire and Pan’s choreography is pure magic.

The Art Deco sets are elegant and quite interesting to observe. In addition, the clothes (especially the evening gowns) are chic and expertly designed. When you combine the wardrobe and set design, you have one very sleek, sophisticated looking film.