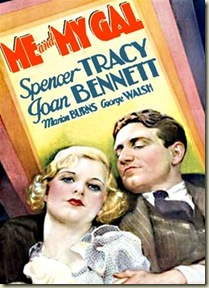 If you haven’t ever seen or heard of Me and My Gal (1932) don’t be surprised. Until recently it was rarely shown on TV (now you can catch it occasionally on FMC) and it has not made it to DVD yet. As a result, it is one of those films that has been somewhat lost in the shuffle of the countless films of the Studio Era. It’s a small film, with a small plot.

Made prior to the repeal of Prohibition in 1933, this film openly glorifies the joyful effects of alcohol consumption. There is a running gag about an always-drunk fisherman (Will Stanton) who is forever getting into comical scrapes. In one particular scene he gets in a 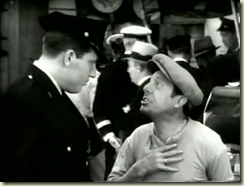 fight with another drunk over the type of fish he has stolen. Yet, instead of using his fists he uses the fish as his weapon. Another scene finds a uproariously good time at a wedding, where guests drink beer out of a bootleg barrel and throw wirelesses out the window. The final shot of the film finds the father (J. Farrell MacDonald) of the film’s heroine (Joan Bennett) walking straight into the camera lens and asking, “Who’d like a drink, huh?” Pushing the envelope was nothing new for director Raoul Walsh, but it is still remarkable that he got away with some of the stuff he did in this film.

Working from a wisecracking script by Philip Klein, Barry Conners, and Arthur Kober, Walsh created a film that is difficult to define in terms of genre. It could be a comedy, crime drama, or an oddball romance—you pick!

Spencer Tracy stars as harbor cop Danny Dolan. Danny isn’t the brightest bulb on the Christmas tree, but he has a lot of the luck of the Irish. After rescuing a dog from a man who was going to drowned it because he couldn’t afford to feed it (a nod to the hard times of the Depression), Danny goes to the local chowder house to buy some bones and meets sarcastic cashier Helen Riley (Joan Bennett). They trade mutual barbs and it quickly becomes obvious they like one another. Later, when a drunk fisherman (Stanton) falls into the harbor Danny saves him and gets a promotion to detective for it. This promotion leads him to the sidewalk outside Helen’s house, where a radio has been thrown out 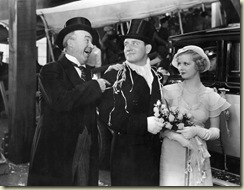 the window at a loud wedding reception (where lots of alcohol is consumed with great relish). Upon entering the apartment Danny finds that Helen’s sister Kate (Marion Burns) has just been married and he overlooks the drinking, which endears him to Helen. This is a fortuitous meeting in two ways: 1) Helen will go out with him now; 2) Kate is the ex-girlfriend of wanted mobster Duke Castenega. In the end, Danny will rescue Kate from the clutches of Duke and get yet another promotion and a large reward. With this large reward he will marry Helen and go to the Caribbean for his honeymoon.

The bantering relationship between Danny and Helen is fun to watch. Danny is a hard-boiled cop, who is always thinking of his next witticism. Helen is a strong-minded dame, who gives as good as she gets when it comes to Danny. There is one particular scene that stands out to me because of how cleverly it was done. While lying together on her sofa (her father had conveniently went to visit his 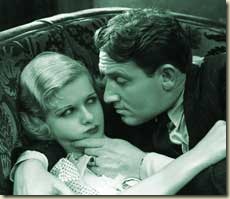 other daughter) the subject of some film comes up. In it, the characters do voiceovers to show the audience what they are really thinking. Walsh launches off this remark to do the same with his own characters. And, so as they are saying what they think the other one wants to hear, the audience gets to hear their real thoughts via voiceover. For example, when Danny makes a comment about Helen’s father being a fun, old guy she agrees, but she thinks aloud to the audience that if her father found them on the couch like they were that Danny would have to visit a doctor.

The acting is relaxed and the story is just strong enough to keep your attention. There is no amazing camerawork to speak of—as a matter of fact, there are a few parts that seem a bit jumpy. Yet, while it’s not the greatest film you’ll ever see, it is nonetheless an enjoyable 90 minutes. Plus, you get to see a very young Spencer Tracy and Joan Bennett show why they would go on to have very long careers.