“Why don’t you come up sometime and see me?” When this now-famous line fell from Mae West’s heavily lined lips in this 1933 film, she and Hollywood (specifically Paramount) had no idea what and whom they were inviting into their world. Laced with double entendres galore, and supported (both figuratively and literally) with overt sexuality (not to mention white slavery), this was the film that just went too far in the eyes of Catholics and the Hays Production Code. Widely ignored for the first years of its existence, the Production Code would start to be strictly enforced starting in 1934. This is why many film historians like to look at the films of 1933 to see just how far Hollywood pushed the envelope before the strict enforcement of the Code a year later (which lasted until 1968 with the MPAA ratings). This film in particular is the reason why this is the only film starring Mae West to be nominated for an Academy Award—at least it was for Best Picture.

A recreation of Mae West’s extremely popular (but scandalous) Broadway play, Diamond Lil, this was the film that catapulted West to Hollywood stardom and made her a household name. Credited with a screenwriting credit (along with John Bright and Harvey Thaw), West plays Lady Diamond Lou, a woman with a penchant for bling and handsome men—even if they are wearing Salvation Army uniforms. Director Lowell Sherman got one helluva leading dame in West—no one was better at dropping saucy one-liners and singing songs dripping with innuendo (“A Guy What Takes His Time”, “I Wonder Where My Easy Riders Gone”, and “Frankie and Johnny”).

The film takes place in the New York City Bowery in the 1890s—primarily in a rowdy saloon run by Gus Jordan (Noah Beery, Sr.). Lady Lou is the saloon’s top entertainer and Gus’s mistress. She gets her nickname Diamond Lou from all of the jewels 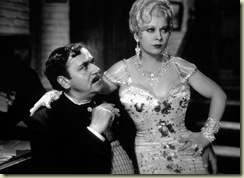 he (and many others) bestows upon her. How can a saloon owner afford to bedeck his paramour in such glittering jewels? He’s a sleazy criminal, who runs a counterfeit ring and a white slavery racket. We are led to believe that Diamond Lou has no idea about these other industries.

Next door to the saloon is a city mission headed by Captain Cummings (Cary Grant). Strangely enough Captain Cummings isn’t really a missionary but an undercover FBI agent trying to get the goods on Gus. He uses his cover as a way to get inside the saloon—he’s there to help the sinners repent—especially Lou. Of course, Gus doesn’t like this because he doesn’t want the good captain to scare off any customers. In addition, Lou and Captain Cummings have a strange flirtation that Gus finds irritating.

The story gets set in motion after a young girl named Sally (Rochelle Hudson) tries to commit suicide, but is stopped and sent up to Diamond Lou’s room for a good talking to. Things had went wrong between Sally and a man, and thinking no man would want her anymore, she tried to off herself. When Lou tells Rita (Rafaela Ottiano), a criminal associate of Gus, about the situation Rita says she can help the girl. Of course, Lou has no idea this means Sally is going to be sold into white slavery in the Barbary Coast.

Meanwhile, we learn that Lou has more pressing issues than wronged young girls: her insanely jealous boyfriend who is in the clink. Chick Clark (Owen Moore) had to take a trip to Sing-Sing after being caught trying to steal diamonds for Lou. He likes to make sweet promises to Lou, like he’ll kill her if she cheats on him while he’s in jail. These promises become a little less sweet when he escapes from jail. In addition to this little problem, Lou’s next door eye-candy is about to be evicted for not paying rent. Her solution? One diamond bracelet for a building. And, finally, if she doesn’t already have enough on her plate, she learns from Dan Flynn (David Landau), another one of her admirers, that the law is about to come down on Gus and that the she might be implicated as well. Enough problems, yet? 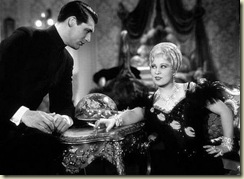 Some things do work out in Lou’s favor, though. When Captain Cummings inquires about the whereabouts of Sally, he is pleased to learn that she has no idea what depravity Gus and Rita are involved in. This endears Lou to him even more, as it is obvious that he has feelings for the sultry singer. Too bad more bad things are on the way, though…

First, Lou is surprised to find Chick hiding out in her bedroom. Crazed with jealousy, not to mention fearful of the cops searching for him down in the saloon, Chick threatens to kill Lou if she doesn’t accompany him in his escape. She promises to meet him after her show.

Second, after receiving another diamond from yet another admirer, Rita’s boyfriend Serge (Gilbert Roland), Lou finds herself in a whole lot of trouble when Rita comes in. 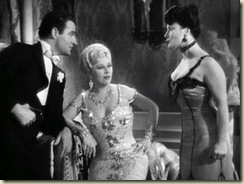 When the two women struggle, Lou accidentally stabs Rita to death and has to have her bodyguard get rid of the body.

When Lou doesn’t show up to go away with Chick, he returns to the saloon and kills Dan Flynn. This event leads to Gus, Serge, and Chick being arrested by Cummings. Lou is not pleased to learn that her missionary man is a G-Man. Oh, well, he has to “arrest” her, too. While riding to her awaiting “prison”, Lou has to give all of her diamonds to Cummings. In exchange, she gets a new diamond ring from her new jailer…Mr. Cummings. Her prison’s name: Matrimony. Interesting ending--not plausible, but still interesting. 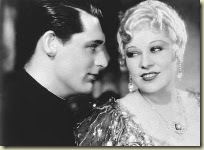 No one will ever accuse Mae West of being a great actress. Yet, she is strangely entertaining as every mother’s worst nightmare for her son. Voluptuous and brassy, she delivers some great lines in this picture. For example, when a woman remarks to her son that Lou is a fine woman, Lou says, “one of the finest women who ever walked the streets.” Another favorite, said to Sally after her attempted suicide, “When women go wrong, men go right after them.” Because of the way she looked and sounded, West was never really given enough credit for just how clever she was. Yet, you cannot write lines like these (and countless others) and not be a bright person. I think this is what made West so dangerous to the morality police: she was just too sexually charged and intellectually bright for her time.

Without a doubt, West and the classic one-liners are the best things about this movie. Cary Grant does a passable job as Captain Cummings, but I would not call this a standout performance. This may have had something to do with the sheer force of West’s personality overpowering his screen presence. Still, it is always nice to see just how handsome he was in his late 20s.