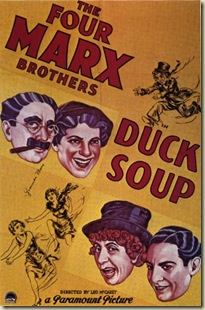 People have many reasons why they either like or dislike the Marx Brothers. I would not classify myself as one of their biggest fans. Yet, of all their films, this 1933 classic is most probably my favorite. Perhaps it has something to do with my being a historian—the film is a political satire of fascism. Thinking the film was a personal attack on his leadership, Mussolini banned it in Italy. But if you push the historical aside for a moment, there is one other reason why this 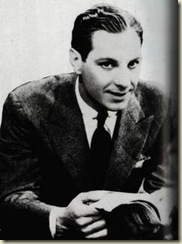 might be my favorite Marx Bros. picture: it was the last one in which Zeppo appeared. No, he wasn’t the funniest of the four—that would be Chico, in my opinion. Yet, he had one thing the other three did not possess: he was good looking. Call me shallow, but every picture needs a little man-candy and Zeppo provided it. Somehow their pictures just weren’t the same after he went straight into retirement (there’s a pun in there, you figure it out).

This was the last film the brothers made for Paramount. It was a a box-office disaster and Paramount decided not to re-sign them. And, so off they went to MGM, where they made their two most successful films: A Night at the Opera and A Day at the Races. I suppose Paramount didn’t know what it had until it was gone…or so the cliché goes.

Ernst Lubitsch was originally slated to direct, but in the end the task fell to Leo McCarey. Good thing, too. Yes, Lubitsch was one of the greatest directors ever (see Ninotchka and To Be or Not to Be…no, I mean really see them), but had he 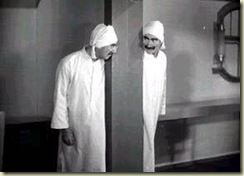 directed there would have never been the famous mirror pantomime, which was McCarey’s idea (not an original one, since it was from an old vaudeville act and a Chaplin film, but still…). And, of course, McCarey also came up with (or recycled if you like) the title. He’d used it in an earlier Laurel & Hardy short. Today most people don’t know what duck soup is—both the film and the expression. I have more sympathy for those who aren’t familiar with old American idioms (see Ziva on N.C.I.S…really, see her on CBS Tuesdays) than I do with people who have no idea who the Marx Bros. are. For the Ziva’s out there, it’s an unaffectionate term for a sucker---just to clarify, not the type you put in your mouth, either.

The screenplay, written by Bert Kalmar and Harry Ruby, incorporates three good musical numbers that fit seamlessly into the plot: “The Country’s Goin’ to War”, “When the Clock on the Wall Strikes Ten” (sung by Zeppo), and “Just Wait ‘Til I Get Through With It”. The story is simple enough: the fictional Balkan kingdom of Freedonia is 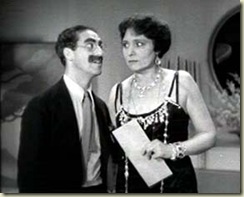 bankrupt and on the verge of revolution when Mrs. Teasdale (the always wonderful Margaret Dumont) offers to support the country with a $20 million loan. The catch? The country must be placed under new leadership—namely Rufus T. Firefly (Groucho Marx). When the ruler of neighboring Sylvania (who I imagine is played by Jeanette MacDonald even though we never see her) sends Ambassador Trentino (Louis Calhern) to the coronation he sets his sights on Mrs. Teasdale, hoping to gain control of Freedonia for himself. His initial weapon of choice is a sultry dancer, Vera Marcal (Raquel Torres), whom he wants to use to distract Firefly from matters of state…and Mrs. Teasdale. 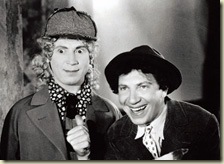 Chicolini and Pinkie are spies for Trentino—however, they are mostly a problem for Trentino as they are total incompetents. Trentino should have had Rolland as his spy, since he is the one who does the most damage to Freedonia by suggesting to Firefly that he insult Trentino to get him to retaliate and be thrown out of the country. After an exchange of insults between the two men ends with Trentino calling Firefly an “upstart” and Trentino being glove-slapped by the president, war is declared between the two countries. This sets up the best sequence of the film: the classic mirror pantomime scene.

Dispatched by Trentino to steal Freedonia’s war plans, Chicolini and Pinkie (disguised as Firefly) break into Mrs. Teasdale’s mansion and all hell breaks loose. When Pinkie tries to break into the safe “Stars and Stripes Forever” blasts through the house and brings Firefly in search of the culprit. Trying to escape detection by Firefly, Pinkie runs into a wall mirror and smashes it to pieces. What follows is a silent cat-and-mouse game between Firefly and Pinkie, as Pinkie attempts to mimic everything Firefly does at the precise same moment that he’s doing it. Highlights of this scene include the Charleston and white Panama hat—which Firefly returns to Pinkie when he drops his. The scene doesn’t end until Chicolini wanders into the “mirror” and Firefly captures him. Chicolini is promptly tried for treason, and amazingly enough, Firefly takes on the role of defense attorney. 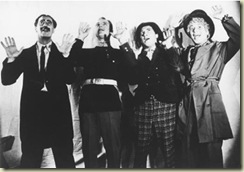 There is only one thing that rivals the mirror pantomime scene, and that is when the four brothers perform (the only time all four appear in the same musical number) “The Country’s Going to War”. The song is a mixture of musical styles (negro spiritual, patriotic, and whatever genre you would put “Comin’ Round the Mountain” in). It is a hilarious parody of the absurdity of war. The war that follows it is also hilarious, but not as classic as the song that leads into it.

When the film came out in 1933 a lot of people were offended by the way the Marx brothers satirized government and its leaders. The Depression was engaged in a full-court press. And, two very different men had just become leaders of their respective nations: FDR and Hitler. To be American and mock democratic political leadership in the face of the rise of authoritarian governments in Germany and Italy seemed too disrespectful to some. I think if the economy hadn’t been in ruins and there weren’t crazy Fascists running around, the film’s reception might have been warmer. Alas, to use yet another cliché, Duck Soup was a victim of circumstance. Thirty years later, when yet another tumultuous event was transpiring (Vietnam), another, more appreciative, audience emerged on college campuses and in art houses. Today, Duck Soup is regarded by many as the greatest Marx Bros. film ever…and, alas, the last one with Zeppo.