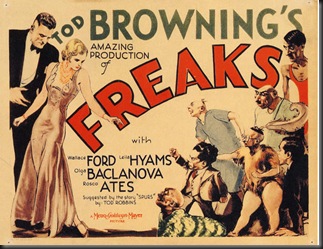 The title of this classic 1932 film is not what one might call politically correct. There are few films in all of cinema that can be classified in the horror realism genre (one might think of The Blair Witch Project or the original Texas Chainsaw Massacre, but they are severely flawed wannabes). Yet, director Tod Browning’s Freaks is one of those few films that blends realism with horror. The freaks in the film’s title are actual 1930s carnival and circus freaks, with all of their deformities on full display. It is said that Browning had the largest casting call of professional freaks ever, and it shows. When watching this film one can’t help but be disturbed by some of the afflictions of these “freaks.” Quite frankly, this is an odd, disturbing film. The film was so shocking that it was actually banned in a number of places. It was later rediscovered on the art house circuit and today is a common staple of TCM’s October schedule.

Browning, of course, is most known for directing Bela Lugosi in the original Dracula (1931). Yet, many film critics consider Freaks to be his masterpiece (not that there was much to choose from) because of his unflinching presentation of another strange reality unfamiliar to the common moviegoer. 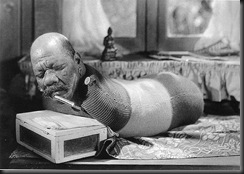 I tend to agree with the critics on this one. In regards to the horror genre, I find Freaks much creepier and frightening than Dracula. Now, if you want to see a truly frightening take on the vampire myth watch Nosferatu: A Symphony of Terror (1922).

The film opens with a carnival barker explaining the events that led to the beautiful “Peacock of the Air”, trapeze artist Cleopatra’s (Olga Baclanova) horrible current state. At this moment, one might prepare oneself for watching a trapeze act gone terribly bad—one would be wrong. Instead, one is treated to one of the 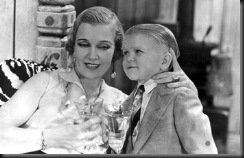 strangest downfalls in all of cinema history. It would seem that Hans (Harry Earles), a wealthy carnival dwarf (don’t ask why he works in a carnival if he’s rich, just go with it) is smitten with Cleopatra. Her beauty and “normalness” makes Hans forget all about his dwarf fiancé Frieda (Daisy Earles). Seeing an easy way to rid themselves of the carnival life and all of the freaks they despise, Cleopatra and her strongman lover Hercules (cliché, anyone?) hatch an unsavory plot. By feigning love and admiration for Hans, Cleopatra convinces the dwarf that they should marry. This leads to one of the strangest wedding feasts ever.

The assembled guests at the wedding table consists of all freaks, sans Cleopatra and Hercules. This is a sight to behold. After consuming way too much alcohol, one of the freaks informs Cleopatra that she is now one of them. Oh, no you didn’t! This, of course, enrages Cleopatra and she launches into full bitch mode by calling her guests “dirty” and “slimy”. 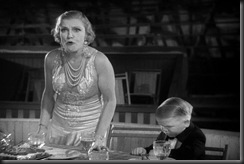 As if that wasn’t enough, she belittles and demeans her new husband by carrying him around on her shoulders like a child or, even worse, a pet chimp. This does not bode well for the wedding night. Which, of course, leads to the reason why Cleopatra married him in the first place: so she and Hercules could kill Hans with poison and then run off with his money.

The scene where she informs Hans that she could never love a freak like him and that their marriage is a sham is difficult to watch. The look on Han’s face is just so pitiful. I suppose Harry Earles had a lot of past insults to draw from when it came to playing this scene. Shocked and humiliated, Hans collapses—of course, the poison didn’t help either. Counting their chickens before they’ve hatched (if you’ve seen this film, you know this is a sad attempt at a pun), 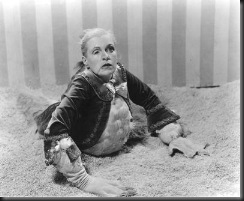 Hercules and Cleopatra freely discuss how many doses of poison it will take to kill Hans. When another freak overhears them, he goes for a doctor. Of course, the dose was so small that the doctor thinks it was an accident and he pronounces that Hans will make a full recovery with the aid of his medicine. Well, now you know that instead of giving Hans his medicine she’s going to substitute poison! In the end, the freaks band together and issue their own sadistic form of retribution. Hence, the grisly spectacle that the carnival barker is describing to the crowd: a legless squawking chicken-woman. What an ending… Oh, wait, yes, upon orders from MGM they had to tack on a happy ending with Hans and Frieda. Personally, the film should have ended with that shocking image of Cleopatra.

While this is not the greatest film you will ever see, it is an interesting watch. The pure shock value of some of the scenes is enough to warrant spending a mere 64 minutes watching Tod Browning’s best film.