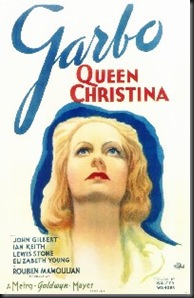 It is difficult to understand how this 1933 racy (this means erotic by 1930s standards) romantic drama ended up being a box-office failure. Here you have one of the most beautiful women in the world, Greta Garbo, playing an amorous 17th century Swedish queen who risks her crown for love. In addition, you have John Gilbert playing her tragic lover—the same John Gilbert she jilted at the altar in 1926. Anyone who read the film magazines back then surely knew Laurence Olivier was supposed to star opposite Garbo, and that it was only after her insistence that Gilbert was given the role. With so much backstory, who could resist this film? Evidently Americans who were too depressed about the Great Depression to watch a tragic romance.

Rouben Mamoulian directed this very loose with the facts historical drama. Screenwriters S.N. Behrman and H.M. Harwood obliviously didn’t read a Swedish history primer, because there are a number of glaring historical inaccuracies (ah, but it was for dramatic effect, so what the heck). The real Christina did not abdicate because of love (or the death of a lover), but 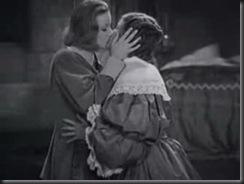 because she wanted to practice Catholicism instead of state sanctioned Lutheranism. However, they did get it right when they hinted at Christina’s lesbian leanings in regards to Ebba (Elizabeth Young), her lady-in-waiting—see the mouth-to-mouth kiss they share in this film (obviously the censor was a man).

Christina ascends to the throne at a very young age after the death of her father, King Gustavus. Her regent, Lord Chancellor Oxenstierna (Lewis Stone), wants to marry her off to her cousin, Prince Charles (Reginald Owen). Prince Charles is a national war 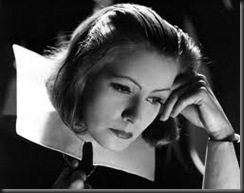 hero and highly revered by the Swedish people. But Christina could care less about Prince Charles and his endless desire to wage war (actually she has a problem with the warmongering). In the palace she has any number of consorts, namely Count Magnus (Ian Keith) and Countess Ebba. Hence, she knows she will not die an old maid, but as she proclaims a “bachelor”. Still, she is a bit hurt when Ebba tells her fiancee that the queen is too domineering. With too much court intrigue and a bit of a bruised ego, Christina finds herself yearning for a change of scenery. And, this brings her to her first meeting with the Spanish envoy, Don Antonio (Gilbert).

Traveling incognito with her trusted bodyguard, Aage (C. Aubrey Smith), she happens upon the Spanish envoy, whose carriage is stuck in the snow. After coming to Don Antonio’s assistance she suggests he spend the night at the nearest inn. This is where things get spicy. Don Antonio mistakenly thinks she’s a boy (she’s dressed like one and has a pageboy haircut), so he thinks nothing of sharing the only available room at the inn with her. 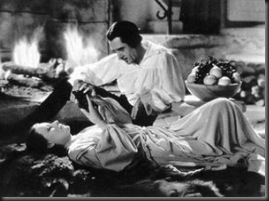 Ah, but why is he strangely attracted to this young man? He soon learns when she undresses in front of a roaring fire. To say he was pleased would be an understatement. They spend the next several days locked in this room enjoying amorous endeavors under fur bedcovers. Where were the censors—in a breadline? Somehow in all of this, she forgets to mention she is the Queen of Sweden.

Instead, the queen thinks they should be properly introduced when he comes to court. Ah, the shocked look Gilbert displays in this scene is priceless. Though he feels slightly used and ridiculed, he eventually forgives her and they consort with one another at court. But there are problems looming: Don Antonio is a Catholic; Count Magnus is jealous; and, the Swedish people want her to marry Prince Charles. The people are so upset that they storm the palace and have to be subdued by the queen herself. Court Magnus is so jealous that he kidnaps Don Antonio and forces Christina to sign a passport for her lover’s return to Spain. This act leads her to abdicate the throne for love and to set her off on a journey to the frontier to meet Don Antonio. Too bad Don Antonio has been mortally wounded in a duel with Magnus—at 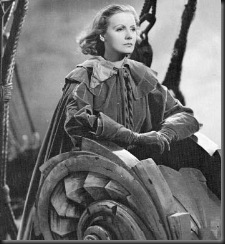 least he waits to die in her arms. That’s something, right? She did give up a crown and kingdom for him after all, the least he could do is wait to bleed to death in front of her. Thus, this brings us to the climatic final shot (by cinematographer William Daniels) of Christina on a boat taking her slain lover home to Spain. A glowing, close-up of Garbo’s marvelous face looking out into nothingness. Yeah, I’d say this film could be considered a real downer for Depression-era Americans.