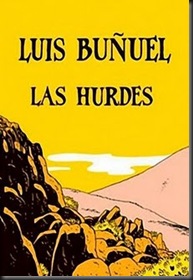 This 1933 documentary by Luis Bunuel is strange, but not unwatchable. Filmed in a poor region of Spain known as Las Hurdes Altas, this documentary presents the dire conditions faced by the region’s inhabitants through a surrealist lens. Hence, why I found this movie disturbingly strange at times. I just don’t know how one can effectively use surrealism to document the true hardships of a people without violating the documentarian’s unspoken code of neutrality—perhaps Michal Moore is a fan of Bunuel?

The English title of this film is Land Without Bread 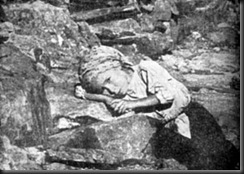 because bread was nowhere to be found in Las Hurdes—it had to be brought in as a luxury item. Tucked away in a mountainous region, Las Hurdes Altas has poor soil that yields very few crops. The one foodstuff they have an abundance of is honey, and even this isn’t very good—unless, of course, you want to smear a sickly jackass with it and watch bees swarm.

Like in most Bunuel films, the Catholic Church is portrayed as decadent and unmoved by the plight of the poor. Using one of his favorite cinematic tools, juxtaposition, Bunuel goes from depicting malnourished, impoverished people to showcasing the lushness of an abandoned convent. 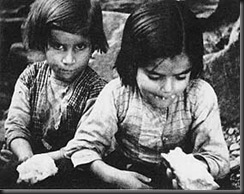 As a completely isolated region, Las Hurdes Altas suffers from not only bodily starvation but intellectual starvation as well. There are no arts to speak of, and the people practice inbreeding, which in turn contributes to a number of mentally challenged and handicapped people. As I watched Bunuel’s portrayal of these people, I kept asking myself if he could find them why hadn’t the 20th century somehow nudged itself into this horrible place? I suppose that was Bunuel’s point: no one cared if they lived in almost medieval conditions.

I often find it difficult to believe that Bunuel came from a wealthy background. He has an almost searing hatred of everything bourgeois and traditional. In addition, his depiction of his homeland (Spain) is often extremely vitriolic. This, no doubt, contributed to his expatriation under Franco.

Under a half an hour long, Las Hurdes is a disturbing look at a people and region that time forgot. Through shocking images, such as decapitated chickens and countless shots of filth and disease, Bunuel forces his viewer to see, in his words, “hell on earth”.