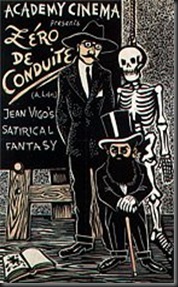 I am not a big fan of surrealism and this 1933 French film is pretty darn surreal.

Under 45-minutes long, this Jean Vigo film was based on his own childhood experiences in a French boarding school. Vigo examines the struggle between freedom and authority. He uses his own unique style of poetic realism to create an allegory about the way the lower rungs of society view those who hold all the power. It must have been a thinly veiled allegory, because it was quickly banned in France. 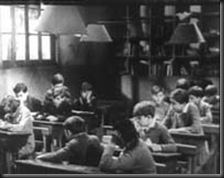 The storyline of this film about school children revolting against their teachers plays a secondary role to the visual elements presented by Vigo. At times it can be difficult to determine what is truly taking place. The children have a number of internal thoughts that are presented as happening in the external. It sometimes takes a moment to realize that what has happened is a farce. For example, when the children have their big “revolution” on the school roof and throw garbage and cans at alumnae at an alumni ceremony, it takes you a second to realize that the alumnae are just dressed up dummies—literally.

The most famous image from Zero De Conduite is 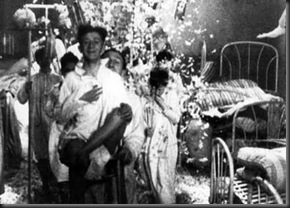 the slow-motion pillow fight. With feathers slowly floating through the air, the children eerily march as though they are an army caught in a snowstorm. I must admit, this innovative shot makes this film almost bearable—almost.

Not nearly as bad as other surreal “classics”, such as Bunuel’s An Andalusian Dog and The Age of Gold(1930), Zero De Conduite just isn’t the type of film I enjoy. However, Vigo did make one surrealist film that I do like, L’Atalante (1934). Although Vigo only completed four short films before he died from blood poisoning at age 29, his work was highly influential on the French New Wave. Some critics believe that Francois Truffaut’s 400 Blows was a direct descendant of Zero De Conduite.