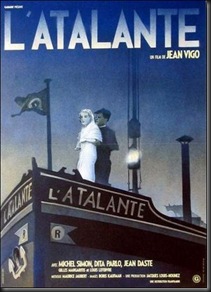 Consult countless lists of the greatest films of all time and you will find this 1934 French classic. Considered to be director Jean Vigo’s masterpiece, L’Atalante is a surrealist love story for the ages. It is also a testament to Vigo’s artistic passion—he was deathly ill as he made it, often directing from a stretcher. He died shortly after filming was completed and could not edit the film himself. Instead, the editing task fell to some overenthusiastic Gaumont editors who cut the film from 89 to 65 minutes; somewhat damaging the film’s overall artistic composition. Thankfully, it was restored in 1990 and now truly resembles Vigo’s vision. 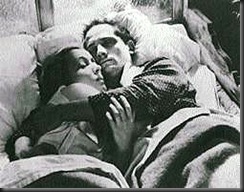 The beginning of the film finds handsome barge captain Jean (Jean Daste) marrying his proper girlfriend Juliette (Dita Parlo). Whoever said the honeymoon can’t last forever must have been thinking of poor Juliette, because she doesn’t get one. Instead, she and her new husband immediately board their humble floating abode, the L’Atalante, where they also share quarters with the rough Jules (Michel Simon) and his assortment of cats, as well as a cabin boy. Basically, this is a story about a simple man who wants simple things and a fanciful young woman who dreams of seeing Paris.  The story takes a dramatic turn when the barge docks in Paris and Juliette goes ashore without telling her husband. When he finds her gone he doesn’t wait for her return; instead, he angrily take the L’Atalante out of port—leaving his provincial wife to fend for herself in the big city.

There are many things to enjoy about this film. Using his signature style of poetic realism, Vigo captures both the sensual, tender relationship between Jean and Juliette in an almost ethereal sense, as well as capturing the grunginess of a cramped barge and the squalor of Depression-era

Paris in a direct, unflinching manner. The love that the couple share is Vigo’s conception of beauty, while most of the outside world represents his vision of all that is crude. When they are together on the barge, even when they are fighting about soiled sheets and unkempt, crude Jules, they are truly happy. It is only when they are both physically and emotionally separated that the couple truly feels anguish and pain.

The most striking sequence in the film comes about due to this separation. Remembering that Juliette had once told him that she had opened her eyes 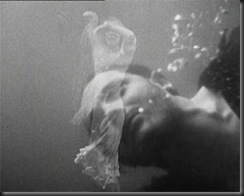 under water to find her true love and had seen his face before she had ever met him, Jean jumps into freezing water and finds a smiling Juliette below the surface. When he returns to the boat he holds tight to a block of ice as if it were Juliette. It is a touching, spectacular scene to watch.  This is one of many great images that cinematographer Boris Kaufman captures. Truly, the film is a visual marvel, especially for 1934.

While both Parlo and Daste are more than memorable in this film, the one standout performer is Michel Simon as Jules. A master crafter of character, Simon always makes you believe he is his character. Still a relatively young man when he took on this role, Simon embodies the image of a sea-worn, old sailor who has seen and done everything.  In addition, 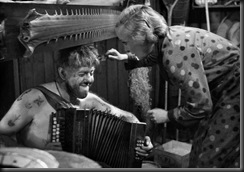 his strange relationship with Juliette is something to behold. He is at once crass and lecherous, and in the next moment sweet and thoughtful. Capturing Jules’ dual nature, Vigo created a spectacular image of Simon, through the use of dissolved exposures, when Jules wrestles himself on deck, which comes across as two ghosts fighting over his body.

Francois Truffaut wrote that this was one of the films that shaped his own cinematic vision. It is easy to see why. Loaded with breathtaking images, as well as a tender love story, L’Atalante is a truly entertaining film.
Posted by Kimberly J.M. Wilson at 7:43 PM