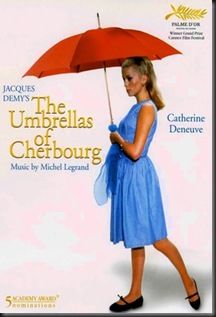 Before her role in director Jacques Demy’s 1964 classic musical, Les Parapluies De Cherbourg, Catherine Deneuve was best known for giving birth to Roger Vadim’s illegitimate son. In a way, this was good preparation for her portrayal of an unmarried, 17-year-old who finds herself pregnant by a boyfriend serving in the Algerian War. Just twenty-years old when this film made her an international star, Deneuve’s melancholic performance was greatly enhanced by an unforgettable Michel Legrand musical score. Nominated for five Academy Awards, including Best Foreign Language Film, Best Screenplay, and Best Musical Score, this film won the Golden Palm and the OCIC. 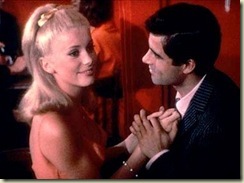 Les Parapluies De Cherbourg is my all-time favorite film. I was in graduate school, studying French history, when a colleague asked what I thought of the French New Wave. This discussion naturally included the French’s love of jazz and films with unhappy endings. This, of course, was a perfect time for my colleague to mention that there was a film that encompassed both of these elements: Les Parapluies De Cherbourg. A lover of musicals since childhood, I jumped at the chance to watch this film once a copy could be procured. Nothing could have prepared me for what I saw.

I suspect I was just as shocked as the audience at the 1964 Cannes Film Festival when I realized that the ENTIRE film is sung (in French, of course)—there is no “traditional” dialogue. Instead, it is a modern day (popular) opera, set primarily to a jazz score. This tends to create a problem for American audiences who overwhelmingly dislike reading subtitles at “normal” speed, let alone at song-lyric speed. About fifteen minutes into watching I turned the subtitles off. My French was passable at the time, so I could mostly keep up with what was being sung. 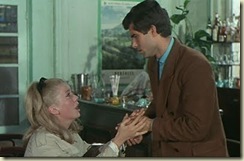 Legrand, with the aid of Demy and others, wrote a musical soundtrack/script that is at times playful, romantic, and haunting. The most famous song is the title song, “Les Parapluies De Cherbourg” (more commonly known in English as “I Will Wait for You”). The instrumental version, which closes the film in heart-wrenching fashion (you will never forget it once you experience it), is brilliant all by itself. Then, when you set effortless lyrics to the score, it is a phenomenal love song. The closing pass of the song (finished off with a rousing violin-drenched crescendo) is:


Ils se sont séparés sur le quai d'un gare
Ils se sont éloignés dans un dernier regard
Oh je t'aim' ne me quitte pas
Loosely translated, from French to English:
They separated on the platform of a station
They moved away in one last look
Oh I love you does not leave me
The best recorded version of this song is by the Greek diva-extraordinaire Nana Mouskouri. Often imitated but never surpassed by countless covers (by such artists as Tony Bennett and Carlo Berardinucci), it is a timeless song that even after 45+ years doesn’t sound dated. In addition to this gem there are other seamless songs that carry the film along to its eventual devastating conclusion.

Another startling element of the film is the way Demy uses color to carry the story. Cherbourg is an often rainy and dreary port city in Normandy, so the bright blues, oranges, pinks, reds, and yellows that Demy uses in the clothing and overall set design is far from a realistic portrait of the title city. Yet, the virtual Technicolor world that he creates, with bright swatches of color, serves as a co-conspirator in the film. For example, in the beginning of the film everything jumps with color, which corresponds to the happy state of young lovers Genevieve (Deneuve) and Guy (Nino Castelnuovo). In a way the bright pastels serve as blinders—the young, impetuous lovers are surrounded by bright, clear color, but they can’t truly see what lies ahead. However, by the end of the film, when the now irrevocably parted lovers meet by chance one snowy night, there is a notable absence of color. Agnes Varda, Demy’s wife (and a director in her own right) has said that Demy’s use of color was aimed at portraying the violence and the cruelty of the story.

For those who like to see happy endings, there is no crueler ending than what you are given in this film. I have often contemplated why the ending is so emotionally jarring. I think it has a lot to do with the youthful exuberance shown by Genevieve and Guy, who are so much in love at the start of the film. It is a pure and innocent love, which in any other film would have come off as sickeningly saccharin. Then, your heart absolutely breaks at the famous train scene where Guy goes off to Algeria with a teary-eyed Genevieve on the train platform. But that’s okay, because the movie is only half over and you know they are going to get married and have a child named Francoise as soon as he returns—right? After all, she did sing she would wait for him! Oh, but she finds out she’s pregnant and Guy doesn’t write and the next thing you know she’s marrying that wealthy jewel smuggler (Marc Michel) from Lola (another Demy musical, from 1961) who you felt so bad for when his romantic hopes were crushed by that slut Anouk Aimee! Yet, still somewhere in your mind is the thought that Guy will come home and save Genevieve from a loveless marriage and all will be right in Cherbourg. But, alas, that’s not what happens.

Instead, you learn the bittersweet lessons that love does not always conquer all and that not everyone (especially you the viewer) gets a happy ending. Instead, people settle.

Genevieve settles for wealth and security; Guy settles for companionship and loyalty. The one small detail that the viewer can take solace in is the unforgettable final scene, where by revealing the names of their respective children, both named Francoise, the couple are somehow still connected—even if they are living different lives they need only say the name of their child and some semblance of what once was pure love remains: “Oh I love you does not leave me.”

This movie made Deneuve a star. Her Genevieve was innocence personified. Called upon to display every emotion, from love to despair, she transforms a naïve, love-struck teenager into a resigned, world-weary woman who accepts that life isn’t always fair. Of course, Roman Polanski and Luis Bunuel couldn’t wait to tarnish that innocence, but that’s a story for another day.

This article was nominated for a 2011 CIMBA in the category of Best Film Review (Musical or Comedy). The CIMBA is the CMBA's award for excellence in classic movie blogging.
Posted by Kimberly J.M. Wilson at 2:16 AM