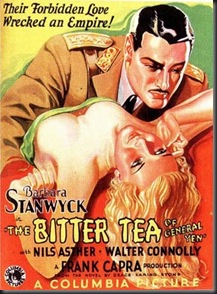 Although hailed by many film critics as director Frank Capra’s masterpiece , The Bitter Tea of General Yen is not his most popular film—that would be It’s a Wonderful Life (1946). As a matter of fact, most people wouldn’t believe this was a Capra film if they happened upon it after the opening credits. I read somewhere that Variety said this was the best von Sternberg movie von Sternberg never made and was unlike any other Capra film due to its sexuality. Quite simply, this is the most artistic film of Capra’s career. There’s a reason for this: Capra wanted an Academy Award. He believed the only way he could win one was by creating a work of art, and that’s exactly what he intended to create with The Bitter Tea of General Yen. However, Capra forgot it was 1932/33 and made a controversial picture about a taboo relationship between a Chinese warlord and a virginal, white American missionary. Alas, there was no Academy Award (not even one single nomination for the entire film). Still, he only had to wait one more year for his Oscar dream to be realized by It Happened One Night, so don’t be too sad for him.

Far from a commercial success, this film was chosen to open Radio City Music Hall in 1933. Quite a few people were disturbed as they watched Barbara Stanwyck’s character, Megan Davis, fall out of love with her missionary fiancée ( Gavin Gordon) and into love with the tyrannical, Chinese General Yen (Nils Ather). Women’s clubs across the country denounced the film and wanted it pulled from theatres. In typical Stanwyck fashion, Babs thought these people needed to get “over it”. 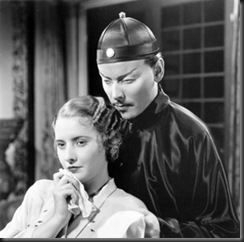 Adapted from a story by Grace Zaring Stone, the film takes place in the midst of a civil war in Shanghai. This is an inopportune time to have a destination wedding, but that’s why missionary Megan Davis (Stanwyck) has come to China: to marry her childhood sweetheart and fellow missionary Dr. Robert Strike (Gordon). Whilst trying to rescue orphans, the couple are separated and Megan is knocked unconscious. When she awakens she is the “guest” of General Yen (Ather) on his train car bound for his remote summer palace. General Yen suffers from a multiple personality disorder. He is a complete ruthless bastard to his underlings and enemies, and then a charming gentleman to Megan. The problem for Yen is that Megan sees both sides, which, of course, both terrifies and confuses her. Like all great Stanwyck characters, Megan is spirited and has no reservations about telling Yen he’s a psychopath. This only amuses him and he keeps her around to occasionally distract him from the fact that his own people are trying to destroy him.

The most intriguing elements of the film are Megan’s dream sequence and the poignant final scene between Megan and Yen. 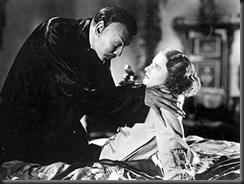 In the dream sequence, Megan dreams that a Chinaman/monster breaks into her bedroom (Freud, anyone?). When a masked man wearing Western clothes comes to her rescue, she unmasks him to reveal that it is Yen (who also happens to be at her bedside when she awakens from the dream). Are those 1933 gasps still being heard?

However, I think it was the final scenes between Megan and Yen that caused the most 1933 outrage. Earlier in the film Megan makes a deal with Yen to vouch for his conniving, two-timing mistress Mah-Li (Toshia Mori). If the mistress betrays him again Megan promises to give up her own life. Well, as luck would have it Mah-Li is a total slut and sells Yen out to his enemies, so Megan has to pay the piper his due. But the piper thinks 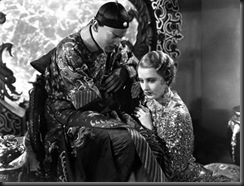 her life is too high a price to pay, especially since he loves her, and he can’t have her shot. Realizing the mistake she has made, Megan gives into her feelings for Yen and decides she must now take Mah-Li’s place. Adorned in full Chinese-styled garb, Megan returns to Yen to wait on him and proclaims that she will never leave him. Ah, but what is the title of this film? The Bitter Tea of General Yen? That’s right 1933 audiences, he has poisoned his own tea, so you don’t have to worry about the white woman living happily ever after with the yellow man. Surely that was some solace to those who were repelled by Megan kissing his hand.

Overall, this is a good film. Shot primarily through filters, Joseph Walker’s cinematography creates a subdued, mystical atmosphere. In addition, both Stanwyck and Ather do superb work with their characters. Ather, especially, does a remarkable job playing the multi-layered Yen. And, Stanwyck is her usual excellent self. Her Megan has just the right mixture of spunk and innocence. Combined, they create one of the oddest and unlikely couples in Hollywood history.