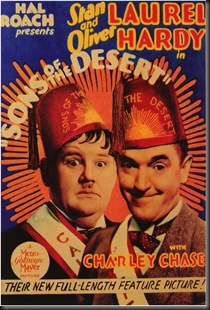 To some the comedic antics of Laurel and Hardy is an acquired taste.  Slapstick comedy is not highbrow and reveals nothing about the true meaning of the human condition—but that doesn’t mean that it isn’t good. Take me, for example. Some of my all-time favorite films are The English Patient, Smiles of a Summer Night, The Lovers (Louis Malle’s), The Umbrellas of Cherbourg, and The Lives of Others, just to name a few—all pretty much categorized by today’s standards as highbrow. Yet, I still enjoy watching a really good slapstick or “crude” comedy. For example, if someone asked me what the 2 best films of 2009 were (can’t do 2010 because I’m poor and can’t afford to pay $10 to see a film in a theater) I’d say The Secret in Their Eyes and The Hangover. Now, if you’ve seen these two films you know that they are in totally different class categories. Still, I cried at both: one from raw emotion (guess which one) and the other from laughing so hard. So, what am I trying to say with this exceedingly long introductory paragraph? Basically this: just because a film doesn’t delve into the human psyche or reveal some inner truth about humankind, that doesn’t mean that it lacks value. That said, let us move on to Stan Laurel and Oliver Hardy’s clever 1933 film, Sons of the Desert.

This was a remake of the duo’s 1930 film Be Big and was their fourth feature length film.  In it, they are members of an all-male club called the Sons of the Desert (also the later name of the duo’s fan club) who are told by their Exalted Leader (really, that’s what he’s called) that everyone in the club must swear by oath to attend the annual convention in Chicago. Ah, but Stan and 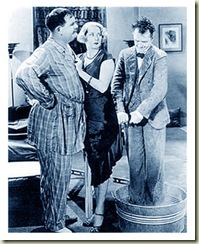 Ollie have wives who aren’t the type to allow their husbands to go off on a trip like this. Of course, Ollie thinks he’s “the king of his own castle” and Stan thinks he has to do everything his wife tells him to do. However, Ollie’s wife, Sugar, no, I mean Lottie (the always funny Mae Busch), is the true ruler of the Hardy household and she wants her husband to go to the mountains with her. Her accuracy with vases, especially towards Ollie’s head, is sharp—just like her words. When Stan's duck-hunting wife Betty (Dorothy Christy) gives Stan permission to go to the convention the boys  have to come up with a plan to get Ollie there too.

The duo hatch a plan that is fool-proof—or so these two fools believe-- with the help of an idiotic veterinarian (Lucien Littlefield) posing as a medical doctor, Ollie is diagnosed as having “canus delirous” (AKA, a nervous breakdown) and prescribed a cruise to Hawaii as a cure. Mrs. Hardy can’t go on the trip with Ollie because she suffers from sea sickness, and so that means that Stan will have to go instead. 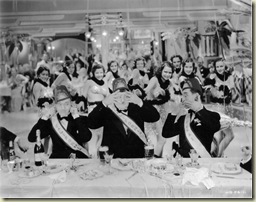 In Chicago we see the boys having a frolicking good time—along with Charley Chase, who has many laughs at their expense with the aid of a paddle and a water-squirting flower. There are scantily clad hula dancers, so in a way Ollie has seen Hawaii in some form. It turns out that Charley is Ollie’s long-lost brother-in-law and they engage in a hilariously risqué long-distance conversation with “Sugar". I especially enjoyed when Charley calls her a great organ pumper. 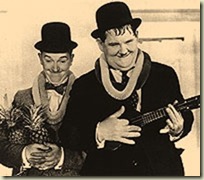 Thinking their ruse has worked, the boys head back to Los Angeles unaware that the cruise ship they were supposed to be on has sunk. This sets up two very entertaining scenes. The first is with a taxi driver that is pure slapstick—Stan was always the best physical comedian of the two in my opinion, and this scene showcases this, as well as his wonderful deadpan delivery. The second scene is when the boys return home and learn of the cruise ship disaster and hide from their wives in Stan’s attic. 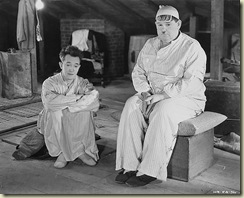 Their plan is to hide out until the rescued cruise passengers are brought to shore and then pretend they are amongst the survivors. The problem is the wives go to the cinema to get their minds off the plight of their husbands and see a newsreel of the Sons of the Desert convention in Chicago.

At one point the boys come crashing through the ceiling and find themselves hiding on the roof during a thunderstorm. They end up being apprehended by a policeman who wants to know their addresses…wait for it…to this Ollie remarks to Stan: “Here’s another nice mess you’ve gotten me into.” Presented to their wives, they unknowingly continue to weave some fantastic lie about how they ship-hiked after the typhoon. Basically, it is pure Laurel and Hardy. 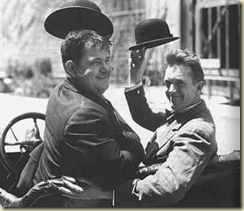 So what makes Laurel and Hardy work? I think it is the opposites attract thing. Stan is thin, tall, honest, and calm and Ollie is short, fat, dishonest, and anything but calm. Of course, Ollie think he’s so much smarter than Stan—the exasperated looks he gives the camera at certain points throughout their films are a trademark.  And, Stan is pretty oblivious most of the time, so Ollie might have something there. Yet, it is Stan who usually gets the last laugh, as he often proves it is better to be lucky than smart. They just work well together. It isn’t life-affirming cinema, but it is entertaining. And, even if it is closing in on being 80-years-old, it is still funny.
Posted by Kimberly J.M. Wilson at 1:26 AM

Email ThisBlogThis!Share to TwitterShare to FacebookShare to Pinterest
Labels: **, 1933, Seiter (William A.)