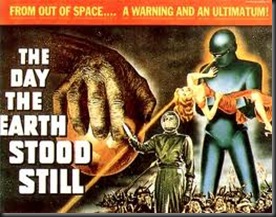 If there were a Hall of Fame for Timeless Movies, then one of its founding members would be The Day the Earth Stood Still. I've probably watched it at least once every decade since I first saw it on NBC's Saturday Night at the Movies in the 1960s. When I was a youngster, the film's fantastic elements--and Gort, the coolest robot on celluloid--appealed to me. When I was a teen, its stern warning about the perils of nuclear war resonated with me. With each subsequent viewing, The Day the Earth Stood Still has revealed something new: presenting itself as a Biblical analogy, an editorial on the influence of media on public opinion, a portrait of fear of the unknown, etc. 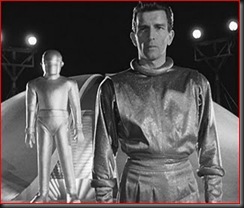 The films opens with Klaatu (Michael Rennie), a visitor from another planet, and his robot Gort making an unannounced spaceship landing in Washington, DC. When Klaatu exits from his ship and reaches into his space suit, a nervous soldier shoots him. While recovering in Walter Reed Army Hospital, Klaatu meets with the President’s secretary, Harley. The alien explains he must deliver a critical message to all the leaders of the world. Harley explains that’s impossible because of global political tensions. Klaatu confesses that he does not understand human conflict. He decides he needs to learn more about Earthlings from living among them. He escapes discreetly from the hospital and, as “Mr. Carpenter,” takes a room in a boarding house. 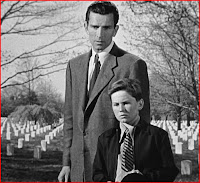 The success of The Day the Earth Stood Still hinges, in large part, on the casting of Klaatu. Producer Julian Blaustein and director Robert Wise originally considered Claude Rains, but his stage schedule made him unavailable. 20th Century-Fox head Darryl F. Zanuck suggested Spencer Tracy, but Blaustein worried that a well-known star would be a distraction (interestingly, that concern didn't apply to Rains). It was Zanuck who eventually "discovered" Michael Rennie, who was peforming in the British theatre. The tall, low-key Rennie brought conviction to the role, but his greatest accomplishment was making the alien visitor seem human. This is no small feat, as evidenced by a scene in which Klaatu reads the words of Lincoln and wants to meet him. This sequence could easily have come across as hokey, but Rennie makes it quietly effective and even heartfelt (since Klaatu has finally found someone who gives him hope about the human race).

With a human-like alien, it was left to the robot Gort to bring an eerie, other-worldly quality to the film. To make the robot as physically imposing as possible, the producers hired Lock Martin, a 7' 7" doorman at Grauman's Chinese Theater. To make Gort even taller, Martin wore 4-6" platform shoes. Walking in the heavy rubber suit in high heels was physically exhausting. There were two suits, one that laced on the front and the other in back. Martin changed suits depending on the camera angle, so that it looked like Gort had no "seams." In some shots, a static model of the robot was used. That Gort model was later bought by Larry Harmon, overhauled so it didn't look much like Gort, and used in Harmon's Bozo the Clown television show.

In addition to its visual impact, The Day the Earth Still even sounds other-worldly thanks to composer Bernard Herrmann's innovative use of a theremin (shown on right). One of the first electronic instruments, the theremin is "played" by moving one's hands in front of it to change sound frequencies. Its distinctive sound became almost a cliche through repeated use in other sci fi films of the 1950s. Still, Herrmann' score remains an impressive achievement today.
Loosely based on the Harry Bates story "Farewell to the Master," The Day the Earth Stood Still features strong religious undercurrents. Klaatu becomes a Carpenter (if in name only). He performs a "miracle" of global proportions. He brings a message of peace, but is largely misunderstood. And, of course, he is murdered and resurrected. Producer Blaustein credits screenwriter Edmund H. North for adding these provocative layers on top of a traditional science fiction tale.

The cast, music, and richness of themes contribute mightily to the film's timeless quality. But it's the story--along with that awesome robot Gort--that makes The Day the Earth Stood Still popular with viewers of all ages. I love to watch it with young people and tell them that they will need to memorize the film's classic phrase and repeat it at the appropriate point in the film...or the Earth will be destroyed. You'd be amazed at how many different variations I've heard of: "Klaatu barada nikto!"