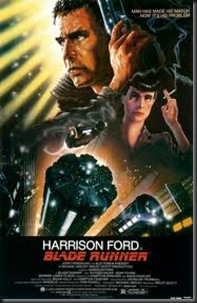 In 2019, the Off-world colonies are utilizing androids known as replicants as slave labor. When several of the Nexus-6 models escape, four of the replicants are believed to have made it to Earth, where their presence would be a violation of the law. Deckard (Harrison Ford), a former blade runner, part of a unit commissioned to detect and kill replicants (an act which has been termed “retirement”), is enlisted to track down and retire the renegade androids. In the course of his investigation, Deckard learns that replicants, for fear that they might develop emotional responses and make them harder to identify, were given a four-year lifespan. As Deckard draws closer, the apparent leader of the replicants, Batty (Rutger Hauer), seeks a way in which to prolong his existence. 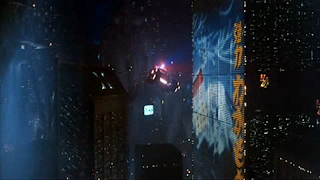 Ridley Scott’s Blade Runner (1982) is a sci-fi film with a clear focus on humanity and questioning what makes a being human, a characteristic it shares with its source text, Philip K. Dick’s Do Androids Dream of Electric Sheep? A number of movies of the science fiction genre deal with what the genre title suggests: an advancement in technology and an extraordinary future. Scott brings the human element into the film, implying that the world of the future is not a product of technology and is instead defined by the people who reside within it. Blade Runner doesn’t simply show its audience what it hasn’t yet seen; it shows us what hasn’t been seen and what has already been abandoned. The future is not technology at its prime. It’s technology in various stages, some of it fresh and new, and some of it in decay.

The movie opens with a beautiful view of a city, with huge, overpowering buildings and vehicles in flight. Scott then takes the viewers into a dark, ordinary office room, where the only thing apparently unconventional is the Voight-Kampff device, a machine used for detection of replicants. As a man (Brion James) undergoes an assessment, the blade runner administering the test, Holden (Morgan Paull), seems to be indifferent to not only his test subject but the machine itself. Considering that the device is almost hidden in shadow in a room of low lighting (the Voight-Kampff is usually regulated with little light), technology is certainly not highlighted. Most of the futuristic machinery is presented in this manner, exemplified by Deckard yawning during a 10-second elevator ride to the 97th floor of his apartment. The world is populated by people who have become accustomed to all of this. The science is not new to them, almost as if Scott were attempting to drop the “fiction” from science fiction.

In the same vein, the world itself has outlived its vitality. Underneath the buildings and bright lights is the subterranean society, the people of the city hiding from the rain, where the sun rarely shines. But inside 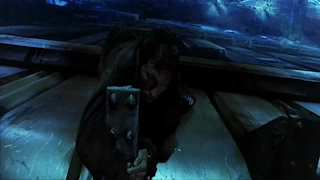 those buildings are vast, empty spaces, and those flashing lights are little more than advertisements, typically endorsing the Off-world colonies. There is a scene in the film where a replicant, Pris (Daryl Hannah), asks Sebastian (William Sanderson) about his illness, and then questions if it is the reason he is still on Earth, which he confirms. This more than insinuates that Earth is comparable to the seemingly deserted machines and buildings, that life on the colonies established on other planets is preferable. The film can be regarded as a critique of consumerism, that the idea of substance holds more weight than any actual substance.

Humans attempt to survive in this forlorn, barren world, but who are the humans? More to the point, it seems, what is the definition of humanity? Replicants were designed to be identical to humans, save for emotional response. But the short lifespan safeguard was ineffective, as the escaped replicants truly want one thing: to live. Survival and fear of death are base components of humanity. And while the deadpan Deckard shows little emotion, the replicants, in addition to fear, express anger, apparent confusion, and, it seems, happiness. However, an audience can identify more with Deckard, a world weary man just trying to complete his job. Blade runners have been trained to detect a replicant by lack of empathy, but in the film, the replicants’ emotional resonance is what ultimately reminds viewers what they are: artificial. Batty’s smiles are maniacal, Pris’ trepidation when meeting Sebastian gives the impression of having been learned, and Zhora (Joanna Cassidy) has a perpetual expression of anticipation, as if she were continually seeking the proper way to react.

Many of the actors in the film have an appropriate stoic quality, particularly James, Sean Young, and the outstanding Edward James Olmos as Gaff, who assists Deckard in the investigation. Some of the actors portray characters known to be replicants, but others are not necessarily androids, and it is difficult not to wonder about their humanity or lack thereof. In fact, Scott directly addresses the idea of Deckard himself possibly being a replicant (a concept taken from the novel), in a small but significant sequence that was excised from the original theatrical version. Ford underplays Deckard but to great effect, and having garnered success with the first two Star Wars films (1977 and 1980), as well Raiders of the Lost Ark (1981), he proved that he was a versatile and capable actor.

Sci-fi novelist Dick was supposedly upset with early drafts of the screenplay. However, he was pleased after seeing a rewrite and viewing an advanced cut of Douglas Trumbull’s special effects (David Dryer completed the project as “special effects supervisor”). The author died a few months before the film’s release, and Blade Runner was dedicated to him. The title of the film was taken from Alan E. Nourse’s 1974 novel The Bladerunner, as well as a screen treatment by fellow novelist William S. Burroughs. In Nourse’s book, “bladerunner” refers to someone running medical supplies (e.g., scalpels) on the black market. As the treatment was not chosen for further development, Burroughs adapted it into a novella, Blade Runner (a movie), in 1979. The rights to both titles were purchased for Scott’s film.

It’s interesting to view the technology envisioned in 1982 with technology of today. While some of it seems dated (hefty monitors vs. today’s flat screens, etc.), other aspects are equivalent to modern standards. In one scene, Deckard examines a photograph by enhancing the image to better see the picture. The device that he uses not only employs voice recognition, but Deckard also gets a printout of the enlarged image. Later, Deckard makes a call to Rachael (Young) on a Vid-Phōn, a videophone version of a public phone booth.

The 10th year anniversary of Blade Runner was celebrated with a “Director’s Cut.” The cut that was shown to test audiences in 1982 was screened in 1990 and 1991 and purportedly inspired this version, which reinstated the aforementioned cut sequence, removed Deckard’s voice-over, and changed the studio-altered ending (which opted for a more upbeat conclusion). While the voice-over worked in establishing a film noir tone for Blade Runner, it was intrinsically superfluous and detracted from the solid cinematography and beautiful score, courtesy of Vangelis (who had just won an Academy Award for 1981’s Chariots of Fire). The studio ending likewise was out of place, shifting the overall feel of the movie. While the “Director’s Cut” was completed without Scott’s involvement, the director authorized the “Final Cut,” which was released in 2007.

Blade Runner is a film of humans and non-humans alike examining what it means to be human. The blade runners expose the replicants by revealing an absence of emotion. The motto of the Tyrell Corporation (the corporation responsible for replicants) is “More Human Than Human.” Do the replicants, then, try too hard to be human? With implanted memories and a desire for longer life, the replicants do a fairly good impression of humans. “Quite an experience to live in fear, isn’t it?” Batty asks of Deckard near the film’s end, and perhaps this is the fear of which Batty speaks: that humanity is a learned trait, and that something other than humans is doing a better job of it.