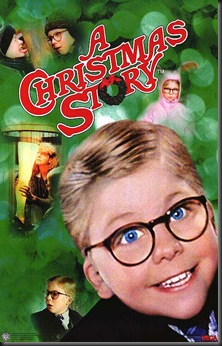 Getting something for someone who has everything hardly seems possible. But imagine what it's like to be someone who only wants one thing, and your longing is being thwarted by a constant threat of shooting your eye out.

Christmas is fast approaching, and young Ralphie Parker (Peter Billingsley) has but one thing on his mind: an official Red Ryder carbine-action 200-shot range model air rifle. But it turns out that everyone -- at least the people in authority -- believe that a simple BB gun is dangerous. Along the way towards that beautiful 25th day of December, Ralphie is burdened by numerous obstacles: leg lamps, ridiculously long lines to see Santa, a Christmas theme for his class, the Queen Mother of all dirty words, and the evil, yellow-eyed bully, Scut Farkus. But the Red Ryder is Ralphie's ultimate goal, and if he and his meatloaf-hating little brother and triple-dog-daring pals can make it to Christmas, maybe there will be something waiting for him under the Christmas tree... you know, aside from a pink bunny costume. 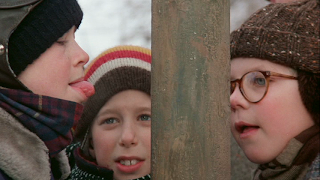 Upon initial theatrical release, Bob Clark's A Christmas Story (1983) did not fare well and received mostly negative critical responses. It certainly didn't help that he'd directed the raunchy comedy, Porky's, the previous year, with a sequel released mere months before A Christmas Story. (Clark had also helmed two notable horror films in the early '70s, Children Shouldn't Play with Dead Things and Black Christmas.) But thanks to TV broadcasts, Clark's film eventually became a holiday favorite. Many sequences, such as when Ralphie is helping his old man change a flat tire and lets slip the F-dash-dash-dash word, are memorable and frequently quoted by fans.

Clark's movie is wonderful, a sweet and touching story told from the perspective of a young boy. The cast is topnotch, with Billingsley breathing life into one of the most lovable cinematic characters of all time. Darren McGavin and Melinda Dillon, portraying Ralphie's parents, are likewise outstanding. The rest of the supporting cast, from Ian Petrella as Randy and even Zack Ward as Scut Farkus, is terrific, and the actors all have their time to shine. 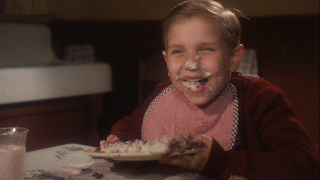 The movie is loosely based on a book by author and radio personality Jean Shepherd, In God We Trust, All Others Pay Cash. Shepherd narrates the film (presumably an adult Ralphie) and even has a cameo in the film, as the man who tells Ralphie and Randy that "the line [to see Santa] ends here... it begins there." Ralphie mentions a specific Red Ryder gun (including a "compass in the stock and this thing which tells time" -- he's referring to a sundial), and although Shepherd clearly recalls such a model, no such gun had previously existed. (The Daisy "Buck Jones" model had a compass and sundial, but not the Red Ryder.) Director Clark also has a cameo. He's the neighbor standing on the street with the Old Man as he finds the perfect window spot for his "major award."

A sequel, My Summer Story, was released in 1994. Like A Christmas Story, the script was based on stories from Shepherd's book. Clark returned to direct, and Shepherd was once again the narrator. The cast, however, was almost completely replaced, with Kieran Culkin (Macaulay's brother) as Ralphie and Charles Grodin and Mary Steenburgen as his parents. The film performed poorly at the box office and has since fallen into obscurity. 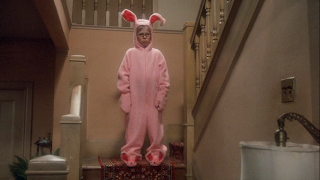 A Christmas Story is obviously about more than just Ralphie's quest for an official Red Ryder... well, you know the rest. It's a snapshot of childhood, a healthy slice of life that many people would love to have back. So while we can never be kids again, we can certainly have fun watching Ralphie, who will forever remain that little boy, wholesome and squeaky clean, and not just because he had his mouth washed out with Lifebouy soap.