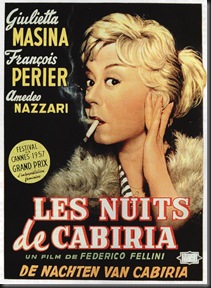 Cabiria (Giulietta Masina) is spending a day with her boyfriend, Giorgio. When they approach a river, Giorgio snatches Cabiria’s purse and pushes the woman into the water. Cabiria is saved from drowning by several locals, but, refusing to believe that Giorgio has simply stolen her money, she returns to her home to find 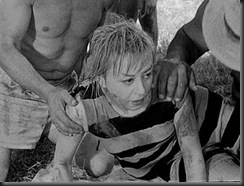 him. Such is the life of Cabiria, who earns her living as a prostitute. She endures hardship and heartbreak, maintaining a firm grasp on the notion that one day she will find a true companion, a generous and selfless man who will shower her with love.

Federico Fellini’s Nights of Cabiria (aka Le notte di Cabiria/1957) is sometimes viewed as a bleak, often depressing film. Cabiria suffers through life’s adversities, which is not always easy to watch, compounded by the fact that she seems naive and so desperate for affection. She encounters men who are disrespectful or self-centered. She wanders into situations which ultimately leave her embarrassed or humiliated. There are times when Cabiria is alone, inside her small house or walking the barren land just outside the city, and a sense of loneliness will betray the woman’s confidence. 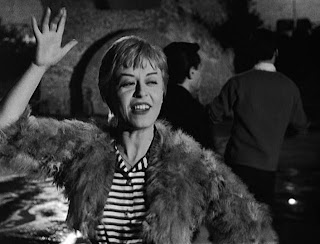 But what makes Fellini’s movie anything but a tragedy is Cabiria herself. Despite a childlike exterior, Cabiria is undoubtedly experienced and intelligent. Rather than let herself become overwhelmed with sadness, she retains hope with a smile and a spring in her step. Soon after Giorgio’s treachery, Cabiria is on the streets with others in her profession, dancing to music. Even after another woman insinuates that Giorgio is her man and Cabiria attacks her, the woman’s fury does not linger, and before long, she’s once again dancing in the street. She sees the beauty in so many things, a woman who is proud of the tiny house that she owns and whose happiness cannot be washed away in the pouring rain. The title is certainly appropriate: as the night blankets everything in darkness, Cabiria stands there, forever shining brightly.

Masina, who was married to the director for many years until his death in 1993, was a tremendous actress and provides Nights of Cabiria with a beautiful and unforgettable performance. Many of Fellini’s films either contained a circus or were reminiscent of one, with a motley assortment of characters, each with his/her own distinctive qualities and in a world that had no choice but to embrace every single person. Masina, quite suitably, was much like a clown. She could move from comedy to tragedy with the greatest of ease, and her face was incredibly expressive. Her grins radiate with joy, and her frowns are shrouded in sorrow. Her character in an earlier Fellini film, La strada (1954), played a clown, but that attribute is clear even without the makeup. 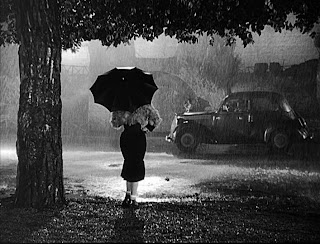 In 1998, Nights of Cabiria was restored by Rialto Pictures and was re-released in theaters. In addition to improving the overall quality of the film’s images, a seven-minute sequence with a character usually referred to as “the man with the sack” was included. The previously cut scene involved Cabiria, walking home alone in the early morning, seeing the man pull up in his car. Curious, she watches as he brings food and clothing to people living in what looked to be holes (translated in the subtitles as “caves”). It enhances the film greatly, as Cabiria meets a charitable man who seems to represent what she desires. Likewise, one of the people in the caves is a former prostitute whom Cabiria recognizes, and the woman, once wealthy from the spoils of her profession, is the embodiment of what Cabiria fears.

Nights of Cabiria won an Academy Award for Best Foreign Language Film, and Masina was awarded the Best Actress prize at the Cannes Film Festival and the Zulueta Prize at the San Sebastián International Film Festival held in Spain. Fellini was awarded the Best Foreign Language Film Oscar three additional times, for La strada, 8½ (1963), and Amarcord (1973). His actress wife was also nominated for a BAFTA for both La strada and Nights of Cabiria.

Nights of Cabiria editor Leo Catozzo, who had worked on other films with Fellini, designed and patented the CIR-Catozzo Self-Perforating Adhesive Tape Film Splicer (sometimes called the CIRO and/or guillotine splicer). He was awarded an Academy Award for Technical Achievement in 1990. 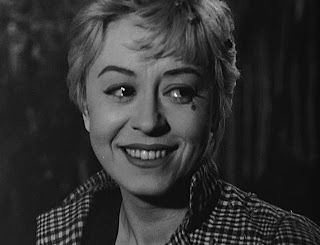 Federico Fellini had begun making films during the movement known as Italian Neorealism, which can essentially be defined as social commentary presented in a realistic manner (e.g., shooting on location, amateur performers, etc.). Certainly later in his career, Fellini moved beyond neorealism, with 8½ as a clear turning point, much more surreal than based in reality. However, even Fellini’s earlier movies rejected the notion of realism. There was a poetic and spiritual quality to his films, and this is prevalent in Nights of Cabiria. The film concludes with a violation of the fourth wall, a lyrical moment which gives the movie bittersweet closure, and just a little more sweet than bitter.
Posted by Kimberly J.M. Wilson at 2:10 AM