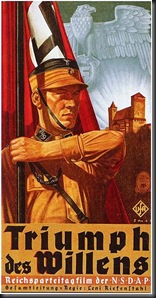 This 1934 “documentary” of the sixth Nazi Party Congress at Nuremberg by director Leni Riefenstahl is considered by many to be the most important propaganda film ever made. The director, who at one time had been a somewhat popular actress, was commissioned by the Fuhrer himself, Adolf Hitler, to film countless hours of Nazi glorification and then produce a film that would show both Germans and the world the greatness of the Nazi Party. It is both a visually stunning film and a troubling reminder of the dangers of hero-worship—especially when said “hero” was a raving racist who wanted to “cleanse” the world of undesirables and mongrels. 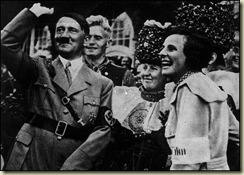 The film opens with the “hero” of our film riding through the clouds as Wagner’s “Die Meistersinger von Numberg” plays in the background. This image is no doubt harkening back to the glories of Valhalla and is Riefenstahl’s attempt to anoint Hitler the Messiah of the German people. One might ask here why she chose Wagner over Handel—Hitler had a penchant for loud and ostentatious German composers, such as Wagner (Hitler’s all-time fave). Whereas Handel’s more refined, and oh my goodness, Old Testament-based compositions were a tad out of line with the Nazi hatred of anything Jewish. And so this is the image the viewer is dealt from the beginning. The rest of the film is a “celebration” of the “greatness” of the Nazi Party and the adulation of its Fuhrer (which means in German, leader).

I am often shocked how few of my students know that Hitler was asked to become Chancellor of Germany in 1933. He didn’t take power or lead some grand revolution. In reality, the money people in Germany saw in him a man that could capture the interest of the people and a man that they could control—they were wrong about controlling him, but absolutely right about his power to transfix the nation. And this is what Riefenstahl focuses on: Hitler’s almost Svengali power over his people.

Literally hundreds of thousands of people are filmed by Riefenstahl adoring and saluting their leader with their echoing “Sieg Heil". Every type of German is captured here: the soldier, the worker, and most importantly to me, the young--because they are the future of the nation and to watch their unwavering 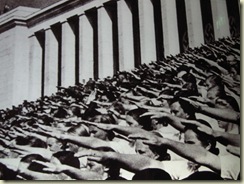 adoration of such a monster is something that you never forget. Did those so young and impressionable young minds really stop loving their Fuhrer when he killed himself in May 1945 or when the Allies put them through denazification training? Just a question that I ponder every time I teach this time period in my classes… 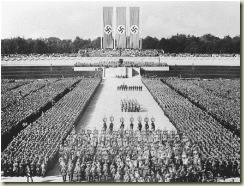 As for the merits of the film, though it is difficult to admit, there are some. Riefenstahl had a gift for creating masterfully designed images. Once seen, no one can forget the overhead shots of the enormous crowds and marching soldiers at the rally. There is some sort of sinister symmetry to these images—like she has captured the most-ordered society known to man, but at the same time the viewer knows that the world is headed for utter disorder. I suppose watching these images that many can’t help but have mental juxtapositions of the reality Riefenstahl was trying to create against what we now know was nothing more than a monstrous mythmaking endeavor. You pair these masterful shots with extremely adept rapid editing and you have a piece of pure propagandist art.

It is too bad that a woman with such an artistic eye fell under the influences of such evil people.  When the war was over Riefenstahl found herself the guest of Allied prisons for four years and saw a once promising career as a director ruined. It should be noted that she vehemently claimed that her work was an example of cinema vertie and served as a historical record of the times.  Perhaps if she hadn’t used concentration camp prisoners as “extras” or been such a force in the Goebbels’ propaganda machine people would have been more apt to believe her.