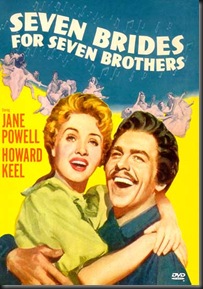 The Oregon Territory in 1850 provides the setting for this high-energy, colorful musical based on a Benet short story (which, in turn, was inspired by Plutarch’s “The Abduction of the Sabine Women”). Adam Pontipee (Howard Keel) is a hard-working “mountain man” who comes to town for supplies—and a wife.

After announcing his plans to a storeowner, he adds: “I’m in no hurry…I got all afternoon.” He quickly settles on Millie (Jane Powell), a comely—but sassy—lass who chops wood, cooks, and milks cows. For Millie, it’s love at first sight and the chance to take care of her own home. 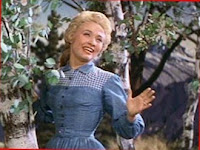 The honeymoon gets off to a rocky start when Millie discovers that Adam has six brothers. “Y’all live around here?” she asks. “Not ’round. Here,” replies one of the brothers. After overcoming her initial shock, Millie grows fond of her brothers-in-law…until they listen to Adam and take extreme measures to get their own brides.
The score by Johnny Mercer and Gene de Paul is a tuneful one. “Wonderful, Wonderful Day” and “When You’re in Love” are bright, pretty love songs. But Mercer’s best lyrics are reserved for “Lonesome Polecat,” a woeful lament sung by the lovesick brothers (a sample line: “A man can’t sleep when he sleeps with sheep”). 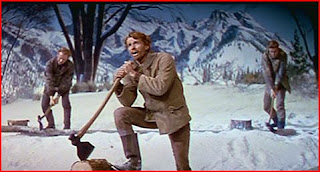 Michael Kidd’s spectacular choreography provides a perfect complement to the music. Kidd insisted that all the dance numbers derive from what the brothers were doing. Most critics consider the barn-raising scene to be the film’s showstopper. But I favor the dance where the brothers try to outshine their rivals from the town and the aforementioned “Lonesome Polecat,” in which the brothers cut and saw wood in unison with the musical beats.

The cast is uniformly fine, with Powell and Keel generating the required chemistry as the romantic leads. Four of the brothers were accomplished dancers (I think Matt Mattox, who plays Caleb, is the best). Russ Tamblyn, who had no prior dancing experience (he was an acrobat), is quite appealing as the youngest brother. It’s hard to believe it’s the same actor who would later played a key role in the wonderfully weird TV series Twin Peaks.

I first saw Seven Brides on The CBS Late Movie in the mid-1970s. I liked it well enough the

n, but my fondness for it has grown significantly over the years. See a good print of it, if possible, so you can enjoy the vibrant colors. Seven Brides for Seven Brothers inspired a mediocre, short-lived TV series and a very successful Broadway play.

It has also played in a key role in a running joke between my mother-in-law and me. In one scene in Seven Brides, Jane Powell's character fixes the brothers an incredible breakfast with everything you can imagine: flapjacks, sausage, eggs, biscuits, potatoes, etc. So when visiting my's wife folks, if my mother-in-law asks if I want something to eat in the morning, I always reply: "A Jane Powell breakfast would be nice." I never get one, though. But I do get to hear a lovely laugh in response.