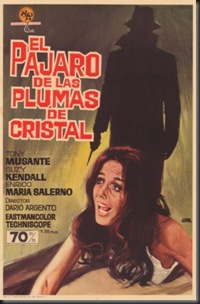 (This article is from guest contributor Sarkoffagus and first appeared at the Classic Film & TV Cafe.  The rating in the title is my own.)

Sam Dalmas is an American writer looking for inspiration in Italy. After two years of writing very little, he is nearly broke and planning a return to the U.S. Passing by an art gallery one night, he sees a woman struggling with a man in black. The woman is stabbed, and the man runs away. Sam is inadvertently locked between giant glass doors and is unable to help the wounded woman. The police arrive, and Sam is questioned all night, but he cannot recall much about the man in black. In spite of this, the police consider the writer an important witness, and his passport is taken from him. Apparently, someone else believes Sam knows more, as an unknown assailant swings a cleaver aimed at his head while on his way home. When other young women start being murdered, and realizing that the killer may very well be the one who wants him dead, Sam begins investigating the killings on his own. This leads to a mysterious painting and a close examination of a recorded phone call from the killer, with a strange sound in the background (and an explanation of the title).

Director Dario Argento was a screenwriter for some years (including co-writing Sergio Leone's classic, Once Upon a Time in the West (1969), and Don Taylor's 1970 Western, Five Man Army). The Bird with the Crystal Plumage (1969) was his directorial debut and marked the beginning of what would become his trademarks. These include: a killer who threatens people with a creepy, whispering voice; focusing on the killer's weapon(s) of choice with extreme close-ups; and frequent point-of-view shots of the killer donning black leather gloves (Argento has stated that, in his films, the killer's hands always belong to the director himself, who believes that no one else can move the hands the way that he wants). One of the more significant and original trademarks that Argento first employed in his debut is a character who believes that he/she has seen something that may be important, but cannot be recalled at the present time. Sam says just that in The Bird with the Crystal Plumage, that there was something about the attack that was a little "off." Argento did this again in films such as 1975's Deep Red (aka The Hatchet Murders), 1982's Tenebrae (aka Unsane), and Trauma (1992). In each film, the character invariably remembers what exactly he/she was seeing, and it eventually leads to the killer's unmasking. 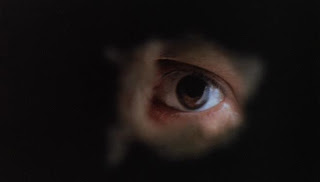 With this movie, Argento proved adept at combining scenes of suspense with humorous sequences. There are many instances of the killer stalking potential victims, and one attack in particular is truly terrifying, as the murderer tries to force a way into Sam's loft, while Sam's girlfriend, Julia, is alone. But comic relief abounds, as Sam visits a man in prison who tackles a speech impediment by saying "So long" (initially making Sam believe the interview has prematurely ended), as well as tracking down the artist of the aforementioned painting, a burly man surrounded by cats who lives on the second floor of a remote cottage, accessible only by a rickety stepladder.

The unveiling of the murderer is shocking and quite clever, and it's important to note that Argento never cheats in hiding the killer's identity. He is fair in his presentation to the audience. Much like the protagonist, Sam, the viewers see what they need to see and are allowed to form their own conclusions. Although many Italian horror films are mocked for weak and illogical stories (as well as shoddy English dubbing), The Bird with the Crystal Plumage has a solid plot with strong, likable characters. Tony Musante is very good as Sam, but he is outshined by Suzy Kendall portraying Julia. The real star, however, is Argento's camera, which simply refuses to sit still, creating beautifully fluid shots.

The Bird with the Crystal Plumage is reportedly an unaccredited adaptation of Frederic Brown's novel, The Screaming Mimi (officially adapted in 1958 in the U.S. as Screaming Mimi). This movie is the start of a reputed "Animal Trilogy," as the director followed this with The Cat o' Nine Tails (1970) and Four Flies on Grey Velvet (1971). Many Italian directors, hoping to achieve similar success, began including animals in the titles, such as Sergio Martino's The Case of the Scorpion's Tail (1971), Paolo Cavara's Black Belly of the Tarantula (1971), and Lucio Fulci's A Lizard in a Woman's Skin (1971) and Don't Torture a Duckling (1972).

Email ThisBlogThis!Share to TwitterShare to FacebookShare to Pinterest
Labels: **, 1970, Argento