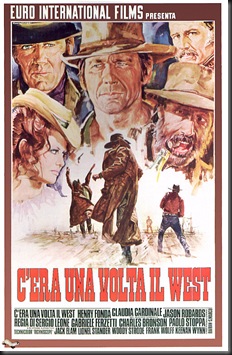 "Big," "epic," and "sprawling" are the words critics frequently use to describe this now-revered 1968 Spaghetti Western. Yet, despite its lengthy running time and visually massive backdrop, Once Upon a Time in West focuses tightly on the relationships among four people over a relatively short period of time. These characters are: Frank (Henry Fonda), a ruthless gunfighter who aspires to be a powerful businessman; Cheyenne (Jason Robards), a rascally outlaw with killer instincts; Jill (Claudia Cardinale), a former prostitute in search of a more meaningful life; and a mysterious revenge-minded stranger whom Cheyenne calls Harmonica (Charles Bronson). 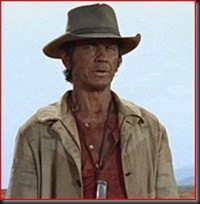 Each character is introduced to the accompaniment of his or her own musical theme, memorably composed by Ennio Morricone. The mood of these themes range from playful (for Cheyenne) to bold and abrupt (Frank) to sweetly old-fashioned (Jill) to eerily disturbing (Harmonica). The last theme--an almost off-key four-note piece--is often played by Bronson's character on the harmonica he wears around his neck.

In addition to the musical motifs, director Sergio Leone employs natural sounds in unique ways throughout the film. For example, the film's opening fourteen-minute sequence contains virtually no dialogue--but we hear cracking knuckles, buzzing flies, water drops plopping, birds, and a train whistle. Later, Leone introduces Cheyenne by letting us listen to a ferocious gunfight from inside a quiet desert cantina. 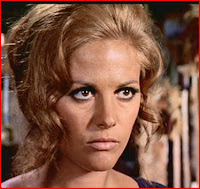 As in most Leone Westerns, the storyline takes a back seat to the interesting characters and overarching theme, Leone's stylish direction, and some marvelous set pieces. For the record, Jill inherits a valuable property from a husband she hardly knew. Frank, working for a railroad baron, wants the property for its future value as a railroad way station. Cheyenne takes an interest in Jill and decides to protect her.

Harmonica helps Jill and Cheyenne, but his motive is revenge against Frank. Indeed, his reason for wanting to kill Frank is a riddle that lurks in the background until their epic showdown at the film's conclusion. Then, in a concise flashback that immediately proceeds the gun shots, Leone reveals the incident that fueled Harmonica’s vengeance.

Bronson and Robards give fine performances, but Henry Fonda steals the film in a great change-of-pace role as a villain who kills defenseless children and kicks out the crutches from underneath cripples. When Frank is making love to Jill, he remarks casually: “I think I might be a little sorry killing you.”

The only subpar performance is from Cardinale, who is also burdened with the least interesting character. Nevertheless, Jill is the strongest female character in any Leone Western and central to the film’s theme. Unlike the male characters, Jill is willing and able to adapt to the “New West.” Frank wants to become a businessman, for example, but he can’t change his violent ways.

Once Upon a Time in the West features one of the best openings of any Western: the aforementioned fourteen-minute sequence in which three gunfighters arrive at a train station to kill Harmonica after he unboards. They walk around the empty town and then wait and wait--and we wait with them as the credits appear slowly across on the screen. After thirteen minutes, the trains finally arrives, but Harmonica is nowhere in sight. As the train pulls out of the station and the gunfighters turn to leave, they hear Harmonica play his eerie tune. They turn around and he becomes visible on the other side of the tracks as the train rolls out of view. That leads to the following exchange:

Harmonica: "Did you bring a horse for me?"
Head Gunfighter (laughing): "Looks like we're shy one horse."
Harmonica (shaking his head): "You brought two too many."
In a flash, guns are blazing and four bodies hit the ground in a matter of seconds. It's a textbook example of how a filmmaker can manipulate his audience's perception of time and space--and it's also an incredible way to start a movie. 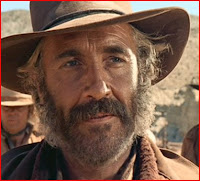 Amazingly, Once Upon a Time in the West flopped miserably when released in the U.S. in 1969. Part of its failure can be attributed to Paramount’s poor decision to cut thirty minutes from the film’s running time, thus rendering some of its plot incomprehensible. Still, the film did brisk business in Europe and helped make Charles Bronson an international star (ironically, Leone had tried to convince Bronson to play the Eastwood role in the earlier A Fistful of Dollars). As Leone’s status as a Spaghetti Western auteur grew in the 1970s and 1980s, Once Upon a Time in the West came to be rightfully hailed as his masterpiece.