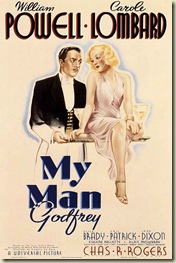 There are few films from the 1930s that I like better than My Man Godfrey (1936).  Screwball comedies are a particular favorite of mine, and this is one of the best ever made.  It is a film filled with memorable characters and lines.  In addition, it has a bit of a serious side, touching on the plight of the Forgotten Man during the Depression.  When you combine all of these ingredients you come up with a deliciously 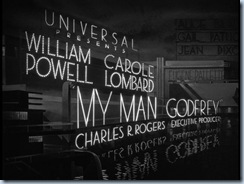 If you went to see this in 1936 you would have seen William Powell and Carole Lombard’s names on the marquee, but while both give fine performances, they are greatly aided by the stellar supporting performances of Alice Brady, Gail Patrick, Eugene Pallette, and Mischa Auer.  It is the supporting characters that carry this film along its crazy path. 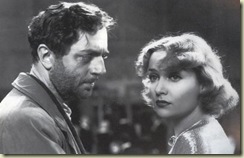 Powell plays Godfrey Smith/Park, a privileged Bostonian who chucks it all after a woman does him wrong. He ends up living in New York City Dump 32 until Cornelia (Patrick) and Irene Bullock (Lombard) find him there while looking for a Forgotten Man as part of a scavenger hunt.  He soon ends up being their 5th Avenue butler.

Both sisters are spoiled and narcissistic, but they are different in that Cornelia has a malicious side and Irene is compassionate incarnate.  I suppose this is what makes Patrick’s character the more interesting of the two.  Cornelia is intelligent and jaded, while Irene is flighty and naïve. I often think director Gregory La Cava and screenwriters Eric Hatch and Morrie Ryskind used Cornelia as their focal point in 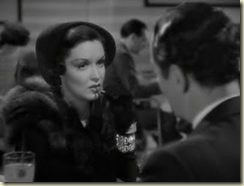 developing their social satire.  Here is a woman who has everything: beauty, class, money, and intelligence. Yet, she seethes with resentment and discontent. A lot of people think Godfrey should have ended up with Cornelia in the end (the whole Taming of the Shrew thing), but what most people forget is Cornelia was the sort of woman Godfrey left back in Boston. For me, Patrick’s is the standout performance. 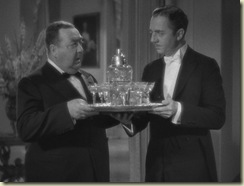 Eugene Pallette and Alice Brady also do memorable turns as Alexander and Angelica Bullock, the parents of Cornelia and Irene. Pallette, in particular, does a fine job of presenting his character’s astonishment at the complete insanity of his family.  Perhaps it’s his voice, but he conveys both irritation and apathy extremely well.  Brady’s pixie-seeing Angelica is the epitome of oblivious mothering.  Here is a woman who has a protégé (really her 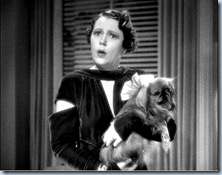 paramour, but the Hays Code was around) in would-be musician Carlo (Auer); drinks too much (hence the pixies); and, supports her daughters’ eccentric behavior.  She is no role model, but her daughters are a lot like her—especially Irene, who decides to make Godfrey her protégé.

Now, I’m not saying that Powell and Lombard don’t give fine  performances, because both are very good.  Powell plays the calm caretaker of the insane asylum that the Bullocks call home well.  He 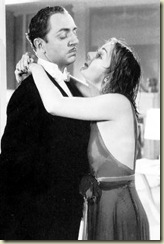 is both bemused and detached in his role as Godfrey.  It is quite comical to watch him thwart off Irene’s advances--especially since Powell and Lombard had been previously married. It is said that she was too animated for him; plus, he was sixteen years older.  So, when Godfrey makes the comment in the film that Irene should find someone her own age and class it was a bit like art imitating life.  Lombard, for her part, plays Irene as a theatrical little girl who doesn’t know how to get what she wants without faux fainting or crying.  The “laugh” is what I find most hysterical about Irene.  Anytime she doesn’t understand what is happening, or when she is unsure of herself, she falls back on that childish laugh.

Besides fine acting, the writing is superb.  The dialogue is rapid-fire and sharp as an axe.  Each character has their own memorable lines, but I’ve always thought that Angelica 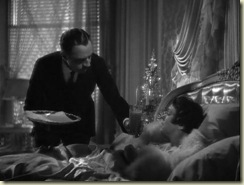 Bullock got the best ones—or maybe Alice Brady just delivered hers better than the rest.  My favorite exchange comes between Angelica and Godfrey:


Angelica: My ancestors came over on the boat. Oh, not the Mayflower, but the boat after that. What did your ancestors come over on, Godfrey?
Godfrey: As far as I know, they've always been here.
Angelica: They weren't Indians, I hope.
Godfrey: One can never be sure of one's ancestors.
Angelica: You know, you have rather high cheek bones.
And from that point on there is a running gag about Godfrey being of Indian descent.  Overall, it’s just a pleasure to listen to such clever dialogue (especially if you compare it to some of the dialogue in modern film).  Smart witticisms never age and that’s one of the reasons My Man Godfrey seems timeless. 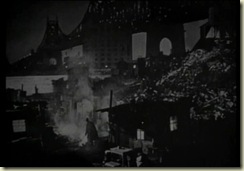 Finally, what most people forget about My Man Godfrey is that it is a slight social commentary about the difference between the rich and poor during the Depression.  The Forgotten Man, men who served in WWI or lost everything in the Crash, found themselves unemployed and displaced living in places like City Dump 32, while the Bullocks lived the high life on 5th Avenue.  The only time the Bullocks of the world notice the Forgotten Man is when they need him to win a silly game for them.  At one point in the film Godfrey says: “The only difference between a derelict and a man is a job.” Of course, more could have been done with this theme.  If I have one complaint with the film it would be that Godfrey shouldn’t have been pretending to be down on his luck but actually have been down and out.  Still, it is a nice twist when you learn the reason he can handle the Bullocks so well is that he was once afflicted with their disease as well.

One interesting aside about My Man Godfrey is that it was the first film to receive nominations in all four acting categories: Best Actor (Powell), Best Actress (Lombard), Best Supporting Actor (Mischa Auer) and Best Supporting Actress (Alice Brady). While none of the actors won the coveted statue, they should have taken solace in the fact that La Cava was passed over as Best Director and Hatch and Ryskind didn’t win Best Screenplay either.  However, the strangest thing about the whole Oscar situation is this: My Man Godfrey wasn't even nominated for Best Picture. Somehow the math just doesn’t seem right there.  Oh, well…
Posted by Kimberly J.M. Wilson at 5:47 AM