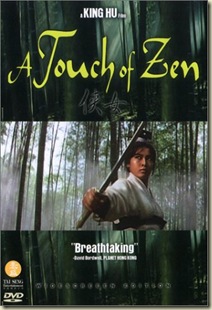 The term wuxia is defined by the famous Chinese historian Sima Qian as: “honest in words, effective in action, faithful in keeping promises, fearless in offering one’s own life to free the righteous from bondage.” The wuxia warrior embodies all of these characteristics. It is the code by which they live.  Today, most film critics regard director King Hu as the pioneering figure in the wuxia film genre. While the genre itself predates King Hu’s first film by more than forty years, it was his visionary use of cinematography, choreography, and color that transformed the martial arts film industry.

Of the seventeen films he directed, the best and most critically acclaimed is A Touch of Zen (Hsia Nu). Originally, the epic 200 minute film was broken into two parts. The first part was filmed in 1969 and released the following year, but eventually both parts of the

film were seamlessly put together and released to the world in 1971. For his efforts, King Hu was awarded the Special Technical Award for Superior Technique at the 1975 Cannes Film Festival and the film itself was nominated for the Golden Palm—these honors also made A Touch of Zen the first Chinese film ever recognized by the Festival.

Set during the early Ming Dynasty, the story’s heroine is Yang Hui Ching (Feng Hsu), the daughter of an official to the Emperor. When her father is murdered for trying to warn the Emperor about a corrupt eunuch named Wei, she must go on the run with General Shi (Pal Ying), a loyal aide of her father. They end up in an abandoned estate in a small town outside Peking.  They meet clumsy scholar Ku Sheng-chai (Shih Chun) and a romantic relationship eventually develops between the scholar and Yang. When her past comes calling, Yang and company must 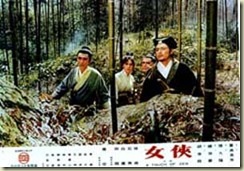 The cinematography of A Touch of Zen is primarily focused on capturing the serenity of nature and comes off as almost metaphysical in character. King Hu had a habit of setting his battle scenes in peaceful, picturesque locations.  The bamboo forest scene (which Ang Lee’s Crouching Tiger and Hidden Dragon borrowed 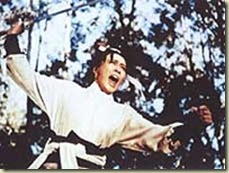 heavily from) is ethereally shot, with mist lofting lazily by and an almost deafening stillness weighing down the swift battle scene.  There’s nothing like watching the fighters bouncing/gliding amongst the towering trees while they fight to the death. Hu also employs mist and eerie imagery when capturing the scenes at the haunted estate.

It is obvious that when Hu choreographed his fight sequences he had in mind what he’d seen at the Peking Opera. Everything is precisely orchestrated and flows seamlessly.  Again, the bamboo forest sequence shows Hu’s artistic vision, with the ensuing chase of the eunuch’s two guards through the forest.

Captured with both long and close shots, as well as with quick cuts, Hu sets a mesmerizing pace.  And, when Yang does her human ladder-climbing move off Ku it is sight to behold.  In addition, the final battle between Abbot Hui and Hsu is almost transcendental to watch—especially with the underlying Buddhist message that true enlightenment transcends even death.

A Touch of Zen is a film that has to be seen to be appreciated. If you are a fan of Crouching Tiger, Hidden Dragon or The House of Flying Daggers, then you should enjoy this film. Ang Lee has said that his

main inspiration for Crouching Tiger, Hidden Dragon was this King Hu classic. However, be warned, it is long.  You might want to take a break after the bamboo forest sequence and then come back to it.  The first part of the film is much more character driven, while the second half of the film goes along at a much quicker pace and contains most of the fight scenes.  So if you want to call yourself a kung-fu or wuxia fan and still look at yourself in the mirror, then you must watch this film.