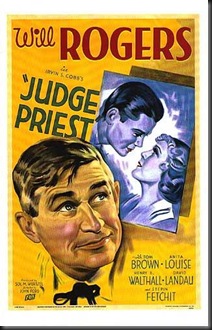 I suspect a lot of people would be surprised to learn that this little-known 1934 film was director John Ford’s favorite of his countless cinematic endeavors.  Some have argued that the title character, Judge Billy Priest (Will Rogers), was really a facsimile of Ford himself, just played by a more amiable personality in Will Rogers. This might explain why it was his favorite, especially when you consider he made many more highly regarded films like Stagecoach (1939), How Green Was My Valley (1941), and The Quiet Man (1952)—just to name a few. And, when you think about it, who wouldn’t prefer the film that most represents them?

All that said, Judge Priest is just a mildly amusing film, and far from my favorite Ford Film—that place is reserved for The Quiet Man. Still, it is a somewhat interesting film to watch because Will Rogers does a nice job playing a home-spun, down-to-earth Kentucky judge who has to step aside when a legal client of his nephew is brought before his court.  What makes Judge Priest so likable is his overall irreverence for proper courtroom decorum. His outright hilarious interactions with his would-be nemesis Senator “Yankee” Maydew (Berton Churchill) are also a delight to watch. Most critics believe that Rogers didn’t really have to stretch himself in the role, because he was just playing a fictional representation of his commonsensical self. This is probably an accurate assessment, but it doesn’t lessen the fact that Rogers plays the role to the hilt.

There is one element of the film that many viewers do not like—the shamelessly stereotypical role that black comedian Stepin Fetchit plays as Jeff Poindexter. Some 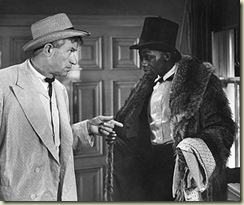 critics have said that Fetchit plays nothing more than a human lawn jockey in the film.  It is true that he comes off as a shiftless trickster. Yet, it is also true that his conversations with Judge Priest are the most enjoyable parts of the movie. And, when you take a minute to think about it you might ask yourself what the film was saying about a judge in 1890s Kentucky who would go fishing with a grown black man. Still, the fact the the Judge jokingly tells Jeff that he might join a lynch-mob if Jeff plays “Marching Through Georgia” is not necessarily politically correct either.  Oddly enough, Fetchit would play Jeff Poindexter again in Ford’s, The Sun Shines Bright (1953)—another installment of the Judge Priest story, this time played by Charles Winninger.

Not the greatest John Ford film, but still worth a watch.
Posted by Kimberly J.M. Wilson at 9:00 AM