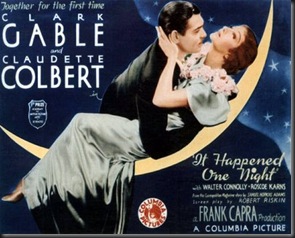 Not as sophisticated as The Thin Man (1934) but just as funny, It Happened One Night (1934) is a timeless screwball comedy that examines both the battle of the sexes (circa 1930s) and the divisions between the rich and the poor.  A box-office and critical success (it won all five major Academy Award nominations: Best Screenplay Adaptation (Robert Riskin), Best Director (Frank Capra), Best Actor (Clark Gable), Best Actress (Claudette Colbert), and Best Picture), the film is a timeless testament to the power of sexual chemistry and top-notch comedic writing.

This is primarily a “road” film where an unlikely couple meet on the road and then develops a love-hate relationship while using various forms of transportation. The film’s screenplay was based on a Samuel Hopkins Adams’ story (“Night Bus”) which first appeared in Cosmopolitan in 1933. Interestingly enough, Gable and Colbert were not the stars Capra wanted, instead his would-be dream team would have been Robert Montgomery and Myrna Loy. Loy I can see—Montgomery not so much.  Thankfully, Joan Crawford’s insufferable personality had made Gable refuse to work with her on an MGM project and he was put out on loan to Capra for this film. 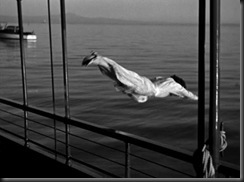 The film opens with a big splash literally when a beyond stubborn and spoiled heiress jumps off her father’s yacht in what I assume are the Florida Keyes.  Millionaire Alexander Andrews (Walter Connolly) has kidnapped his just-married flighty daughter Ellie (Colbert) to prevent her from consummating her impulsive marriage to no-good playboy King Westley (Jameson Thomas) before he can have it annulled. She obviously had other plans. An APB is put out on the "escaped” heiress and she is forced to trade in luxurious yacht travel for an inconspicuous seat on a Greyhound bus traveling from Miami to New York.

Ellie is the hottest news story since the Lindbergh baby and recently fired newspaper reporter Peter Warne (Clark Gable) needs a spectacular scoop to get back in the good graces of his editor Joe Gordon (Charles C. Wilson), who sacked him for drinking on the job and writing free verse columns. So when Peter finds himself on the same bus with the bratty 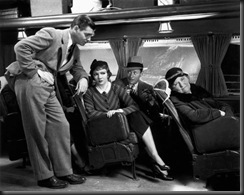 heiress, he sees a way to turn his luck around. When the bus leaves her at a Jacksonville rest stop after she returns late, Peter is waiting for her. She offers to pay him for his silence and this irritates him, so he wires his editor about a  big scoop.  When they catch the next bus to New York they meet Mr. Shapeley (Roscoe Karns), a smarmy traveling salesman who introduces himself as: “Shapeley’s the name, and that’s the way I like them.” Good thing he finds himself sitting next to a woman with one of the most famous pair of shapely legs in movie history!  His coarse, overt passes at Ellie rankles Peter and he introduces himself to the salesman as her husband.

Later, when weather forces the bus riders to take refuge at Dyke’s Auto camp, newly “married” and broke Ellie and Peter have to share a room.  If she was 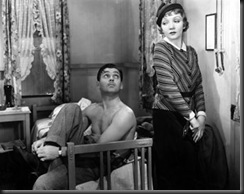 outraged that she was called Peter’s wife, how do you think she reacts when he tells her he’s a newspaper man and that he’ll turn her in if she doesn’t give him an exclusive?  This sets up the famous Walls of Jericho scene where he places a blanket over a clothesline between the twin beds and proceeds to undress in front of her to force her onto her side of the room.  The next day detectives show up at the door and the couple have a hilarious make believe spat right in front of them—obviously two people who speak to one another as though they want to kill one another are married. This “fight” brings the couple closer together and some sort of understanding seems to be reached.

When the bus trip is resumed Shapeley reasserts himself when he learns who Ellie is and he asks for $5,000.  This forces Peter to pretend that he’s a gangster who is holding the heiress ransom for a million dollars. He te 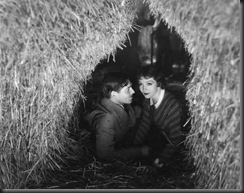 lls Shapeley that he has machine guns in his suitcase and he’s not afraid of using them. Still, it’s obvious that bus travel is no longer a good way to travel incognito with rest stops that sell newspapers, and so at the next stop they get off and start out on foot. Eventually she ends up being slung over his shoulder and the two exchange a class discussion about piggy-backing, which results in her ass getting slapped.  The couple are forced to sleep in a haystack for the night. This is the first time in the film that it is obvious that the couple are falling in love, though, of course, neither will admit it to the other.

The next day they set off on the road to try their hand at hitchhiking. This sets up yet another verbal sparring match between the two, as he tries to instruct her on the three ways to thumb your way into a car.  While she lounges on the top rail of a fence post he puts these techniques into practice and fails miserably. Finally, she tells him she has her own system and hops down off the fence and “hitches” her skirt up, revealing those famous shapely legs and a garter to boot. The next car comes to a screeching halt and gives them a ride. 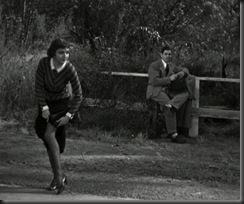 As he pouts beside her she makes one of the funniest cracks in the film: “I proved once and for all that the limb is mightier than the thumb.” When the man (Alan Hale) that picked them up tries to steal Peter’s suitcase he gets the short-end of the deal, as well as a black eye, when Peter steals his whole car from him.

Near New York the couple stop at Zeke’s auto-court for the night. Peter promises to pay the man at the end of their week-long stay. Ellie reads that her father has consented to her marriage and that he is begging for her to come home.  However, Ellie has second-thoughts now that she has spent some time with Peter.  After he tells her about his dream woman and his island of Eden, Ellie begs him to take her with him… 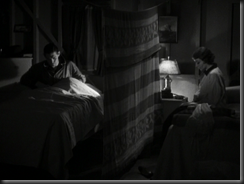 even crossing yet another Wall of Jericho and sitting on his bed while declaring her love for him.  He sends her back to her own bed and she cries herself to sleep.  While she is asleep he goes to New York to collect his $1,000 check on the story that Ellie’s having her marriage annulled so she can marry him. Too bad the owners of the auto-camp barge into the room and announce that Peter has left her…without paying the bill. Thinking she’s been deserted, she calls her father to come get her. Oh, it’s just bad timing all around and both feel that they have been duped and deserted.

Back in New York Ellie has to have a proper church wedding to satisfy her father.  She is completely miserable but determined to go through with her marriage to King to avoid anymore problems. Meanwhile, Peter has returned his $1,000 check to his editor and returned to working at the paper. The only issue that is left to be resolved is his traveling expenses of $39.60, which he asks Mr. Andrews to pay. When asked by Ellie’s father if he loves his daughter Peter finally relents and says, “Yes, but don’t hold that against me. I’m a little screwy myself.” On his way out the door he sees Ellie who asks if he got his money.  He declines to stay for the ceremony. 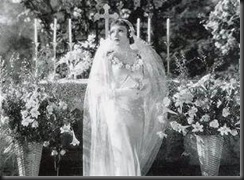 There are just some things that can never be explained logically. Why would you wait until you are walking your daughter down the aisle, in front of hundreds of people, to announce that Peter loves her and that her car is waiting by the gate?  And, then, why as a bride would you wait until the priest asks you if you will “take this man to be your husband” to hike-up your wedding dress and run off across the lawn? Oh, it’s Hollywood. Needless to say, the ending wraps up the story cleverly and trumpethantly (yes, I made that word up). 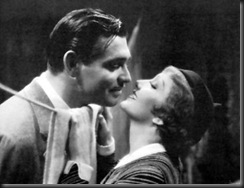 because she thought the script was weak and she wanted to go on vacation.  In the end, she got the best end of the deal: $50,000, a 4-week shoot which allowed her to go on vacation, and an Oscar.  She drove Capra nuts with her pouting, but he put up with it because he saw the chemistry that Gable and Colbert had on screen.

Overall, this is a highly enjoyable film.  The acting is spot on—especially Colbert’s portrayal of the spoiled heiress. The look on her face, and most especially in her eyes, when she delivers her sharp and funny dialogue is priceless. Gable, of course, is good, but his is not the standout performance.  The standout performance goes to Capra,  Riskin,and Adams who wrote a really clever and funny script. The double entendres alone would have made Ernst Lubitsch proud—and that is saying something.
Posted by Kimberly J.M. Wilson at 3:49 PM