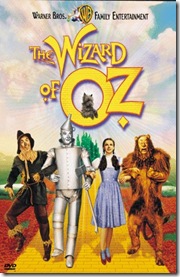 So, how does one of the greatest films of all-time come to be classified as a “Guilty Pleasure” by me? Well, it goes something like this…

Imagine if you will a group of adults sitting in a darkened room watching a 60-inch plasma screen TV with the sound of the film on mute and the Pink Floyd album The Dark Side of the Moon blaring from the surround sound.  Perhaps some adult beverages and other illicit items have been consumed and you are feeling pretty good…and then something happens when Dorothy (Judy Garland) starts singing “Somewhere Over the Rainbow” and you don’t hear her voice.  We won’t call it a flashback or, goodness to Betsy, a “bad trip.” No, we’ll call it a Proust moment…a Remembrance of Things Past, if you will. 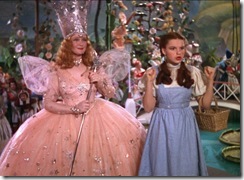 about age five—curiously enough, about the size of a Munchkin. At the time I was an only child who spent a lot of time talking to Weeble Wobbles and my prized Franco Harris football card.  How mind-bending was it when the black-and-white screen turned to color as Dorothy emerged from the farmhouse into the merry old land of Oz? Aren’t those little people cute…can I, too, represent the Lollipop Guild…I would thank you very sweetly if I might.  Oh, and that beautiful Glinda (Billie Burke)—she does remind me of my beloved Aunt Jean, with her sweet disposition and strawberry blonde hair.  It was a night of amazement—flying monkeys and a horse of a different color—I was hooked. I would spend the next twenty years watching the annual CBS broadcast with my family—every year, no matter what.

Of course, my perception of the film and its characters changed over that twenty year period. For example, when my mother remarried and I gained not only a step-father but a spiteful step- 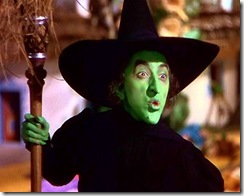 grandmother, Almira Gulch and the Wicked Witch (Margaret Hamilton) looked just a little bit like her, and my loathing of those characters somehow intensified. At around the age of twelve I stopped being afraid when Dorothy and the gang nervously went into the hall of the great and powerful Oz (Frank Morgan), as well as when they ventured into the haunted forest with those creepy trees—I couldn’t let my two younger brothers think their big sister lacked courage. Then, there were the boyfriends in my mid-teens who wanted to do anything but spend a night watching an old movie with my entire family—they did it, of course, most of them had brains you see. Yes, things changed, but I could still count on that yearly broadcast to bring my family together.

And, then something unbelievably rude happened: CBS stopped airing it in 1998 and TNT/TBS bought the television rights. Yes, we had Cable and could continue to watch if we wanted, but something fundamentally wrong had occurred. CBS showed the film once a year—TBS/TNT showed it several times, year round.  The EVENT was no longer an event…it was just any other film on TV, plus they took way too many commercial breaks. Alas, we stopped watching the film together as a family in our home…and as the film tells us, there is no place like home.

So, there I would be, sitting on my couch channel surfing and all of the sudden I’d find myself on TNT and hear the Wicked Witch say, “You cursed brat! Look what you've done! I'm melting! melting! Oh, what a world! What a world! Who would have thought a good little girl like you could destroy my beautiful wickedness?” Really? It’s almost over! Curse you CBS!  Is nothing sacred?  I blocked TNT and TBS from my favorite channels on my remote.

My yearning for the film and its true meaning brought me to the point of despair. The situation had become so desperate that I contemplated doing something unfath 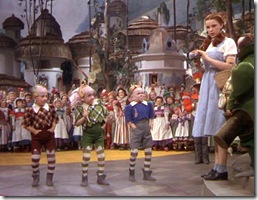 omable: watching the film in a theatre. Yes, when Warner Brothers re-released the film to theatres I wanted—no, I needed—to go.  Oddly enough, I couldn’t find any adults to go with me.  And, then it happened: It really was no miracle. What happened was just this...My eye began to twitch. My skin, to itch. And suddenly I started to unhitch. Just then the Ditz—that’s right, I asked a Tween to go with me.  Now, you must understand, I have no children for a reason: I don’t like them. Perhaps that sounds strange coming from a person who admires a film that opens with a title that reads:

Still, I despise children most sincerely. As such, you can only imagine to what depths my despair had descended to ask a child to go see my childhood favorite film.  So, we went. And, to my great surprise, we had a good time. The film truly transcends time and age.  That doesn’t mean I encountered the same feelings I got when I watched it with my family—that is something that can never be recaptured—but it was still a memorable, pleasant experience. It was a cathartic moment.

Now, I no longer block TNT and TBS from my remote, and if I happen upon Oz when the Witch is asking the Scarecrow if he wants to play with fire, I watch it.  Mind you, I find myself looking 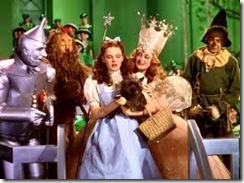 around the room to see if my brothers chant along when the guards at the witch’s castle say, “"O-Ee-Yah! Eoh-Ah!" And, it is here that I feel a pang of guilt. Have I betrayed a familial ritual by watching the film alone or with other imbibing adults in the dark? Perhaps…but time marches on and broadcast television changes its schedule.  We will always have those twenty years of things remembered about the wonderful world of Oz—and I will always endure my own private guilty pleasure whenever I watch it.
Posted by Kimberly J.M. Wilson at 11:31 PM