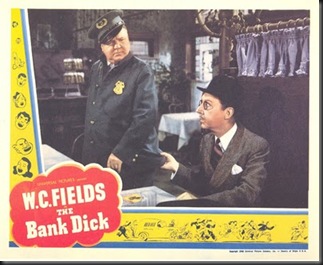 W.C. Fields isn’t as timeless as one would like.  Overall, vaudeville humor hasn’t aged well, either.  Still, Fields was a devilishly delicious deadpan comic who knew how to keep a gag running. He was greatly aided in this endeavor by his own clever writing.  Who better to convincingly deliver funny lines than the person who wrote them—I’m sure Woody Allen would attest to this.  The Bank Dick (1940) is a product of Fields’ comedic wit (director Edward F. Cline was just along for the ride). Oh, pay no attention to the name listed in the writing credit either, Mahatma Kane Jeeves--it was one of Fields’ many pseudonyms (evidently Gandhi was on his mind).  The story follows the Fields’ blueprint: an easy-going, imbibing man just wants to be left alone but finds himself hampered by domestic disturbances and inconvenient chance meetings.  What follows is a 74-minute study in Fields’ own unique brand of comedy. 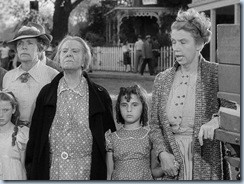 Usually the best parts of Fields’ films deal with his character being mistreated by his ungrateful family—which is mostly filled with women: wife, daughters and an occasional cranky mother-in-law.  However, this theme isn’t really the crux of The Bank Dick. Yes, his aptly named character, Egbert Sousè, has a nagging wife (Cora Witherspoon as Agatha), an unpleasant mother-in-law (Jessie Ralph as Mrs. Brunch), and two daughters, one being a terror (Evelyn Del Rio as Elsie Mae) and one being stupid (Una Merkel as Myrtle).  Yet, unlike some of his other films, the family doesn’t figure heavily in the story.  They are used intermittently to show how unappreciated Mr. Sousè is, but otherwise they don’t really bring much to the table.  I personally would have liked to have seen more of Jessie Ralph’s belittling mother-in-law. She had some of the best lines in the entire film.  Here are two of my favorites:

I definitely think they should have used her acerbic tongue more and less of Una Merkel'’s Myrtle, who is engaged to Og Oggilby (Grady Sutton), one of her father’s unfortunate co-workers and co-conspirators. Still, stupid characters often play the much needed role of straight man (or woman, let’s be PC!), so I suppose she serves her purpose.

There are a few random gags in the film, another trait of a Fields’ 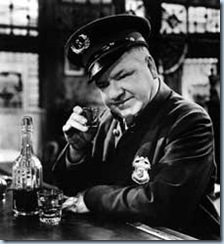 production, that I could have done without.  His stumbling into the role of film director after the actual director goes on a bender wasn’t very funny to me.  Perhaps he was trying to make a inside dig at someone (perhaps himself, LOL!), but I just found it completely useless to the story.  Another thing I could have missed was a few of his sojourns into the local watering hole.  Yet, I must admit that the name of the establishment, the Black Pussy Cat Café, is pure Fields gold.  Who else in 1940s Hollywood would have dreamed up such a name and got away with it?

All of the best things about this movie revolve around his work as an unqualified bank dick. What security guard in his right mind would tackle a small child holding a toy gun?  Sousè does, though I doubt he was in his right mind, and the result is laugh-out-loud funny.  When he 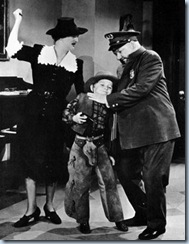 asks the child’s mother if the gun is loaded, she replies, “No, but I think you are!” Who would think it was a good idea to buy $500 in bonds from a slickster (who says: “I want to show you I'm honest in the worst way”) he met at the Black Pussy and then convince his soon-to-be son-in-law to “borrow” money from the bank to buy them?  Sousè would—and he’d do it with a big grin on his face and rye on his breath.  Who would try to postpone the bank’s books from being examined by the wonderfully named J. Pinkerton Snoopington (Franklin Pangborn) by using food (or, in this case, liquid) poisoning?  Sousè would, and then he’d have another drink!

What most people remember about this film is the extended road chase scene at the end of the film, where Sousè has to drive the getaway car for a bank robber.  The scene is reminiscent of the old silent chase scenes from the likes of the Keystone Cops. I’m not a big fan of slapstick chase scenes, but Fields gets off some great lines as the car slowly falls apart. A particular 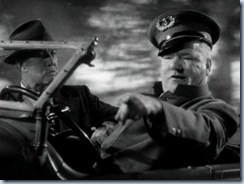 favorite barb is: “The resale value of this car is going to be nil after this trip.” I also got a hearty chuckle out of him handing the wheel to the robber when he was told to let the robber have the wheel.  It’s silly humor, but it’s smart silly humor.

While this isn’t my favorite Fields’ film (I prefer It's a Gift (1934), The Bank Dick has many enjoyable moments in it.  It is also a showcase for Fields’ comedic genius.