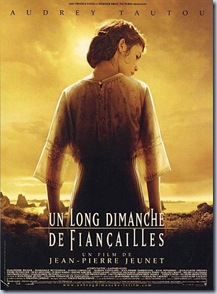 This visually stunning 2004 French film from director Jean-Pierre Jeunet is a beautiful and touching testament to all that is good about French cinema.  Only in le cinéma Français could you depict the horror of World War I and its trench warfare with a wryly comedic touch, while at the same time tell both a love story and a revenge story without engaging in oversentimentality or malice. The acting, particularly that of the females, is nuanced and stellar. However, it is Bruno Delbonnel’s extraordinary (and Academy Award nominated) cinematography that makes this such a striking piece of art. 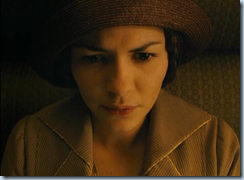 The always beautiful and spunky Audrey Tautou plays Mathilde, a polio-crippled woman who refuses to believe that her fiancee Manech (Gaspard Ulliel) was killed alongside five other men at the ridiculously named Bingo Crepuscule trench.  All five men had been convicted of self-mutilation and thrown out into No Man’s Land between the French and German trenches to bring an end to a stalemate.  Conflicting stories as to whether any of the five men survived sends Mathilde all over France looking for answers. Along her journey she meets a unique and colorful assortment of men and women who fill in the missing parts of the story. What’s great about these characters is that none of them are useless—they all have an important role to play in moving the story along.  However, it can be difficult to keep everyone straight, so a second viewing might be necessary, especially if you watch the film subtitled.  Still, I think the pacing of the story is told in such a way that most non-French speakers can keep up with the unfolding stories.

What I like about Tautou’s Mathilde is that she is a woman not above using her disability to get what she wants.  I know that sounds politically incorrect here in America, but in France it’s quite comical to let a perceived weak person use their plight to get what they want.  In France, the weak are to be revered, so when Mathilde uses this to her advantage it’s just funny.  What makes this flawed character trait even more 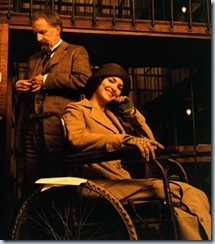 wickedly amusing is that she is the strongest character in the entire film.  Whether she’s dealing with doubtful family members and quirky questionable people,  or making small deals with herself (such as: if the dog comes in the room before dinner she will continue to look for Manech), Mathilde is someone for whom you feel compelled to root.  The scene that stands out most for me is when she attempts to beat Manech’s car to the bend in the road—another deal which would ensure that he makes it home alive.  Watching her constricted body attempt this feat is heart-pounding and uplifting. The body control that Tautou had to exhibit here is mind-blowing.  It’s just something you have to behold for yourself to fully appreciate how powerful a performance she delivers throughout.

It is a given that Tautou is the star of the show, but both Jodie Foster and especially Marion Cotillard give standout performances here. Foster plays Eloide Gordes,  the wife of one of the men believed killed alongside Manech.  She and her husband Benjamin (Jean-

Pierre Darroussin) have five children (none of which he fathered) and if they have a sixth he would be discharged.  So he asks her to sleep with his best friend Bastoche (Jerome Kircher).  What ensues is a story of jealousy and heartbreak—and the eventual self-mutilation of both men and then Bingo Crepuscule. You wouldn’t know that French wasn’t Foster’s mother tongue, as she speaks it with ease.  Here she delivers a haunting performance of a woman who lost both her husband and lover to the cruelty of warfare.

I wouldn’t be doing service to this film without commenting on how riveting Marion Cotillard is as Tina Lombardi.  She obviously channeled Jean Moreau’s performance in The Bride Wore Black (1968) as she played a prostitute hell bent on 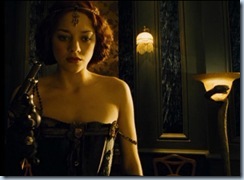 meting out punishment to the men she believes killed her Corsican lover Angel (Dominique Bettenfeld)—another of the five men at Bingo Crepuscule. Tina is a stone-cold ninja in how she executes a handful of French officers.  Her outfits alone are marvelous (what French woman wouldn’t come dressed for the occasion!), but the way she uses them to kill is even better. My particular favorite execution is when she kills the man who lazily neglects to pass along a pardon for the five men.  After tying the man to the bed and allowing him to think something kinky is about to happen she proceeds to shoot the mirror above the bed and shards of glass fall down on his naked body.  How ingenious can you be!  Cotillard won a César for Best Supporting Actress for this role and she deserved it. Now, if she would only return to France and stop making American films that don’t exhibit her talents to the fullest (an aside, she was the best thing, other than the visuals, about Inception)! 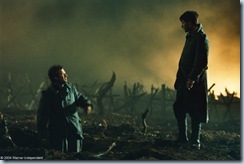 Finally, what makes this film so beautiful is the expert cinematography of Bruno Delbonnel.  His lens poignantly captures the horrific grimness of the battle scenes at Bingo Crepuscule. Stark and appropriately captured in gray and brown tones, these scenes are powerfully displayed and are spectacular to watch.  Besides his expertly depicted battle scenes, he presents the Brittany countryside in wide, lush, sweeping shots that make you want to go there on your next vacation.  My two favorite sequences come at the Picardy war cemetery and the military archives.  The cemetery shot just overwhelms 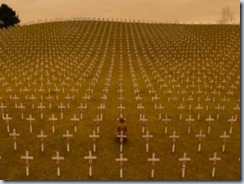 you with the angle positioning of the camera and the broadness of the shot—all those white crosses with Mathilde in the middle of it—notice how small she truly looks.  The military archives sequence uses complex shots, with above-head perspective and low-angle shots the look upward toward the immensity of the situation and place. It is Delbonnel’s camerawork that makes this such an enjoyable film to watch.
Posted by Kimberly J.M. Wilson at 8:22 PM