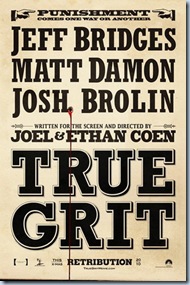 True disappointment is more like it!  Three great actors and two Coen brothers would seem like a recipe for success, but something went wrong with True Grit (2010).  I suppose I am in the minority here, as I read many critics’ reviews that praised this Coen venture.  In addition, it garnered ten Academy Award nominations (at least it didn’t win any!). Now, it’s not like I am one of those rabid John Wayne fans who thought there was no way the 2010 version could compare to the 1969 one, because I didn’t think that was that good, either (though Wayne does give a fine performance).  No, I just found it an average, run-of-the-mill Hollywood picture—without the aliens and huge explosions.  That’s not to say there is anything wrong with average—I tell my students average is fine, as most people are “C” students—but with all the hype surrounding this film I expected more but got less.

An adaptation of the 1968 Charles Porter novel of the same name, the film is about one girl’s unyielding need for retribution for her father’s murder.  More mature than any fourteen year old I ever met, Mattie Ross (Hailee Steinfeld) wants to

hunt down Tom Chaney (Josh Brolin) and bring him to justice for killing his boss and her father.  She may be matter-of-fact and businesslike, but she lacks the necessary skills to venture into Indian Territory (this film is set way before the PC age) and apprehend him herself.  So, she hires a Deputy U.S. Marshall known for a shoot-first mentality and, well, true grit.  Marshall Rooster Cogburn (Jeff Bridges) might have true grit, but he’s also a drunk and unpleasant person.  Along the way they team up with (and occasionally break off from) Texas Ranger LaBoeuf (Matt Damon), who is after Chaney for killing a Texas state senator.  What follows is a drawn out (literally) search of a half-witted, pseudo-psychopath, with a few side encounters with odd characters and reprehensible reprobates. 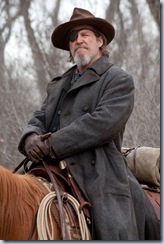 The acting is passable to good. As usual, Brolin gives a strong performance in his very limited screen time.  In addition, this is one of Damon’s best roles in years.  The young Hailee Steinfeld was nominated for Best Supporting Actress, which I don’t understand, as she is clearly the focal point and star of this film.  It is difficult to believe that this was her first feature film, as she stood up well against three highly respected male stars. As for Bridges, who was nominated for Best Actor, I thought he hammed it up too much and made Rooster into a caricature.  Without a doubt, John Wayne’s Rooster is the more superior of the two.  The nuances that won Bridges the Oscar for his portrayal of Bad Blake in Crazy Heart (2009) are MIA—perhaps he had to top his award winning turn or was afraid that his career would end once people saw Tron: Legacy (2010).  Who knows? I just wasn’t into it. 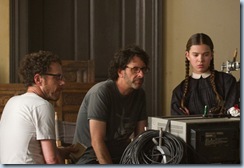 ones (Burn After Reading [2008] and The Ladykillers [2004]).  True Grit falls somewhere in between the good ones and the crappy ones.  It may have been their choice to have the characters speak in an exaggerated manner that irked me the most.  No one, not even back in the 1800s, spoke like that unless they were on the stage.  And, these characters are most certainly not on the stage—no matter how resolute their personal agendas.

The one thing I truly enjoyed about the film were the scenes between Mattie and Colonel Stonehill (veteran television actor Dakin Matthews).  The true exasperation that the poor

Colonel encounters at his business dealings with Mattie are funny and entertaining.  When he says, “I do not entertain hypotheticals. The world itself is vexing enough,” I couldn’t help but laugh.  Had the rest of the film been a bit more like these scenes I might have liked it better.